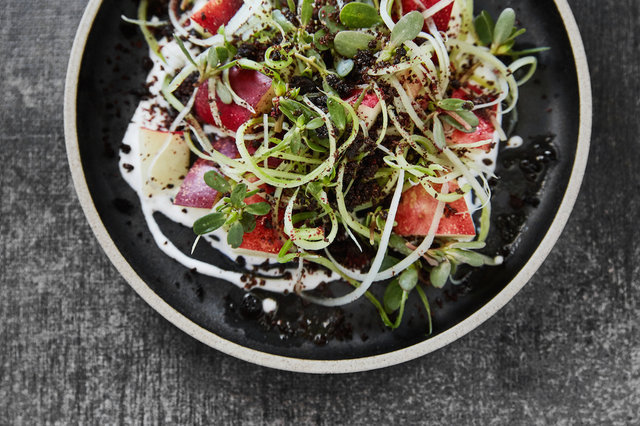 If Los Angeles is vexing (or aloof, or un-engaging) to non-natives, it may be because the city defies comparison to other global cities. Los Angeles' downtown is not its Downtown (and vice versa). Many Angelenos define career success not by their 9-to-5s, but by their lack thereof. Our stubborn reliance on the car not only shapes our nightlife, but leaves a potential flâneur with little to discover even after a miles-long walk.

The same erroneous comparisons are true when taking in the city's dining scene. Little is analogous here to other hubs like New York, San Francisco, or Paris. This is thanks, in no small part, to the relatively low rents that allow chefs time to find their voice, as well as the freedom to experiment and stay true to their vision. New restaurants in quiet pockets of the city don't need to be blockbuster hits or expense-account-only affairs to last. As testament, Los Angeles has more noteworthy menus in the low-and-mid-level price ranges than at the very top level. Maybe this is the reason Michelin pulled its Los Angeles guide after 2010, shunning a food scene that doesn't discriminate among its eaters or cater only to the highest income-earners. Who knows? But L.A. is doing just fine without Michelin, even if some think otherwise.

Foodies near and far (yes, even those in New York) are recognizing L.A. as the country’s reigning king of eats. Just look at our culinary good fortune. The selection of quality produce in Southern California is second to none, while the diversity and depth of cuisines are almost endless.

In 2016, Los Angeles saw a glut of new restaurants and cafes open across the city: a Nashville-inspired fried chicken slinger in Chinatown; a Top Chef star's pitch perfect Melrose kitchen; and an ode to the vegetable elevated beyond tired vegan tropes in Santa Monica. Here are our nine favorite additions of the year (you can click here, or scroll all the way down to see them on a map). 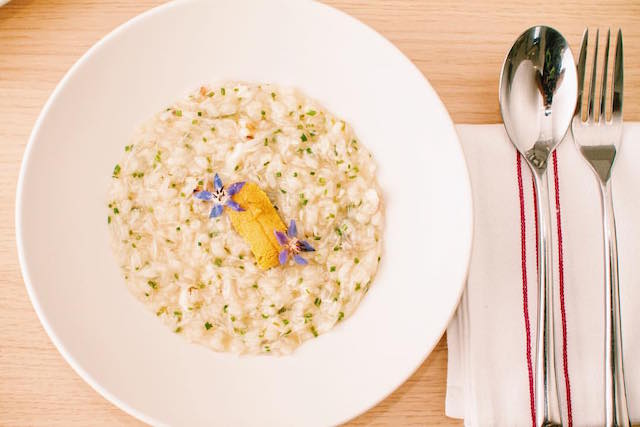 Kato's storefront might strike you as nearly blank and the interior's decor as subdued—if not downright minimal—but that's because chef Jonathan Yao (an Alma alum) is busy packing his dishes with maximum punch. Each plate of the seven-course tasting menu is brightly flavored and immaculately presented. A dish of porridge is topped with uni to give it the right balance of saltiness, while Dungeness crab and scallion compliment the pairing. A black briquette is in fact a squid ink-colored bun filled with pork belly. For dessert, a dollop of thick, tart buttermilk pudding plays against the texture of rose-flavored ice shavings that melt instantly in your mouth. Book a table soon, because this gem won't stay hidden for long. 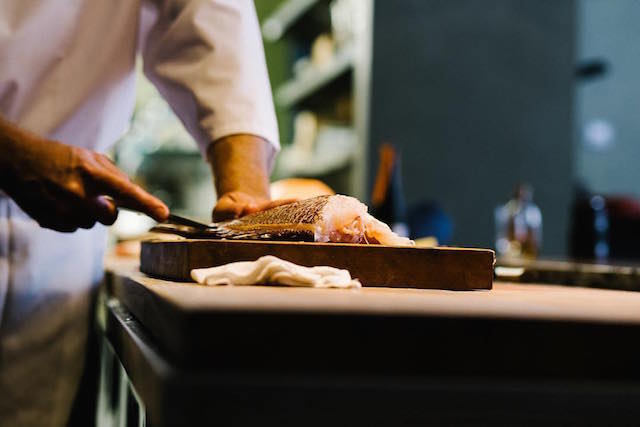 Los Angeles is already a mecca for Japanese food. A casual stroll down Sawtelle, or through the strip malls of Little Tokyo, will reveal shop after shop peddling everything from seafood okonomiyaki, to zasai pickles, to late-night izakaya fare. Admist this (and after half a year of delays), enter Shibumi. Any presumptions made by Shibumi’s location inside a parking garage are quickly dispelled after stepping inside. The 30-foot long, 400 year-old Cypress trunk countertop serves as the dining room’s centerpiece. Behind it, chef David Schlosser (who has studied in the kitchens of L’Arpege, Urasawa, Kikunoi Honten, and Aureole, among others) works with grace and precision to create a menu taking Japanese traditions and inserting his own Western twist. The corn soup is a highlight. The abalone dish is a rare treat and the addition of miso gives it sweetness. Be sure to finish with an order of the black sesame ice cream topped with puffed rice. It is hard to leave Shibumi without thinking Schlosser has created a singular experience in L.A. 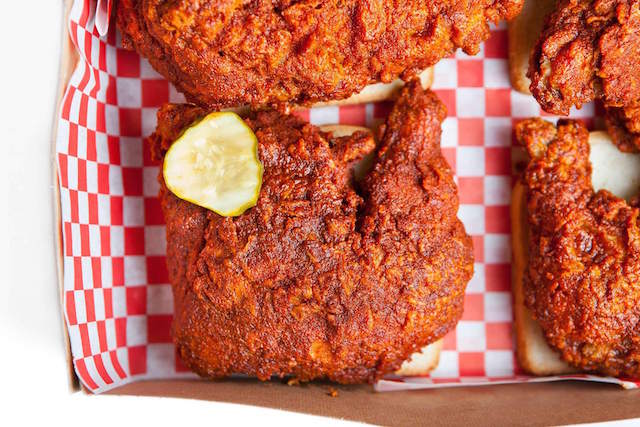 While Howlin’ Ray’s was already a popular food truck before opening a brick-and-mortar this year, it should be noted that lines are over an hour long from the moment the doors open and stay that way until they close. Why? Because chef Johnny Ray Zone has mastered the one item on his menu: Nashville-style hot chicken. To start, Zone (formerly of La Poubelle) has crafted a spice blend that is no doubt one of the spiciest you’ve ever tasted (the two highest heat levels use Carolina Reaper peppers and Ghost peppers), while any heat level is expertly balanced with notes of sweetness and umami. The chicken, free-range birds sourced locally from Mary’s, is itself not to be overlooked. Whether you order a fried chicken sandwich, chicken wings, or the breast, the bird is always juicy and tender. Crinkle-cut fries are a nice side order, and the comeback sauce and coleslaw are a welcomed topping (read: coolant) when chowing down on a meal that will leave you sweating even on the coldest days of winter. 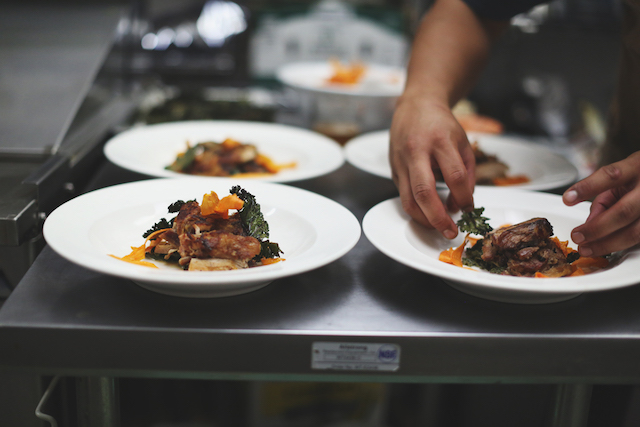 Filipino cuisine was the “it” cuisine of the year, and brothers Chase and Chad Valencia strode confidently into the wave with their pop-up Lasa. The Valencia brothers note that Filipino food has been hidden away in the kitchens of grandmothers for too long, and Lasa (housed at chef Alvin Cailan’s restaurant incubator Unit 120) is their attempt to spotlight the cuisine. Chef Chad happily serves traditional dishes like pancit (which he modernize with the addition of a homemade patis, and a heavy serving of butter), or Binatog Popcorn, made with coconut oil and toasted coconut chips (the sort of luxurious snack you would want to eat on the beach in Palawan). A prix-fixe menu is available if you can’t decide which treat to choose. 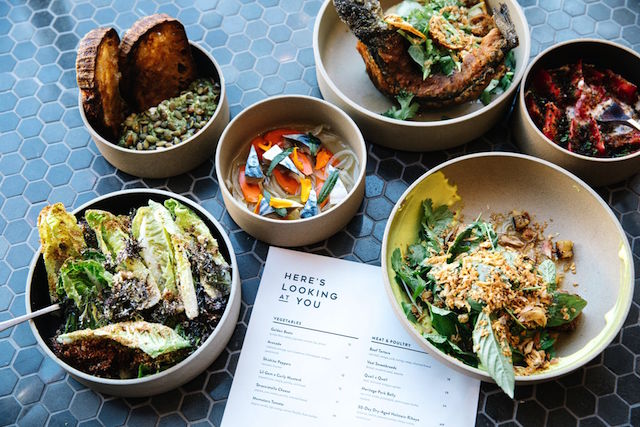 (Photo courtesy of Here's Looking At You)

HERE’S LOOKING AT YOU

Jonathan Whitener and Lien Ta have succeeded in opening Koreatown’s most ambitious new restaurant. The menu is inventive and the seats are coveted. Whitener and Ta, who met under the tutelage of Jon Shook and Vinny Dotolo (Animal, Jon & Vinny’s, Son of a Gun), serve up a series of small, shareable, and deeply satisfying plates that, true to their joint history, are umami rich. But beyond their penchant for protein centerpieces, the duo slips in notes of the unexpected. The trout on a bed of hummus is delicious, and the avocado salad is like no other avocado salad you’ve had before. The bar program can hold its own against the kitchen’s heavyweight hitters. The Known Associate, a cocktail that mixes the summery sweetness of watermelon and lime with the smoky depth of mezcal, is already a favorite. 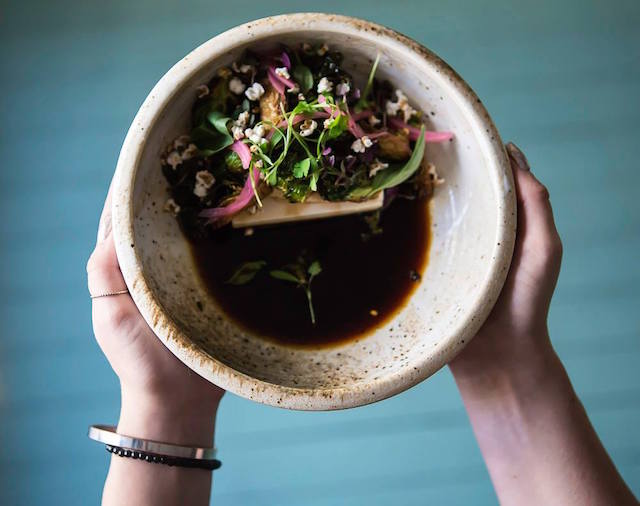 Nick Erven has returned to full form with this eponymous Santa Monica spot. Erven, whose much-lauded Saint Martha closed in late 2015, debuted his new vegetable-centric project only a few months later. The setting is relaxed, and the food is playful: combining flavors and ingredients into forms and textures that will keep you drooling. Erven loves to take dessert items and repurpose them as a main course. You’ll find savory donut holes as an appetizer option replete with sauerkraut and a delicious applesauce topping. Ordering a plate of beets will reveal beet sorbet along with pickled beets, avocado mousse, and streuseled almonds. Nick Erven has established a winning argument for why non-vegans should stop rolling their eyes at a menu of vegetables. 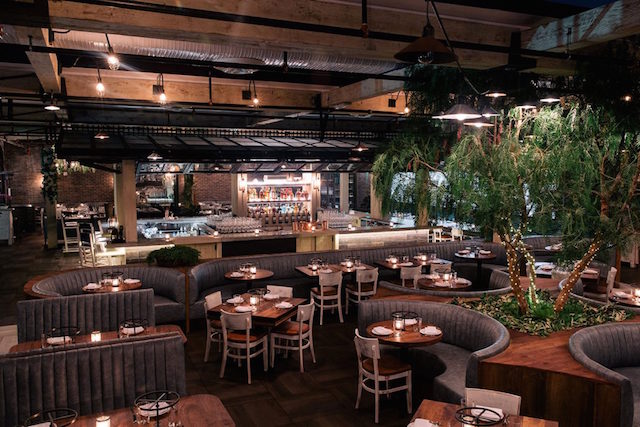 There was no better place to see and be seen in 2016 than Catch. The West Hollywood newbie has become what The Ivy was 15 years ago, or what Chasen’s was a generation before that. If you can make it past the battalion of paparazzi crowding the entrance you will be whisked quickly upstairs and onto this rooftop beauty. The truffle sashimi is a decadent dish that combines tuna with caviar and black truffle. The lobster mac and cheese (by no means of the sweatpants-at-home-with-Netflix variety) is made with mascarpone and parmesan cheeses and fresh Maine lobster. There is a reason for Catch’s dress code. 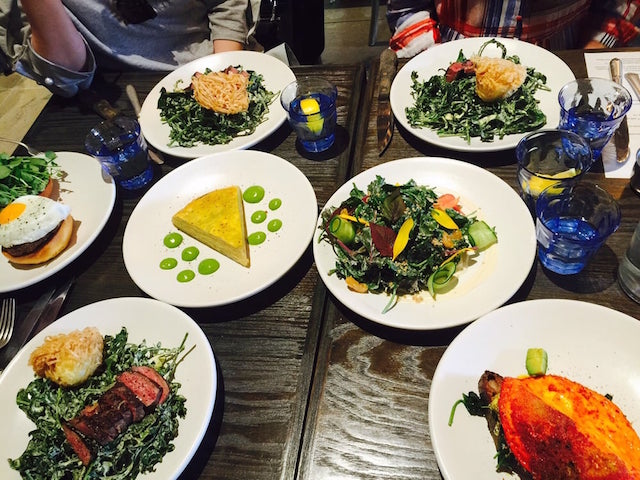 (Photo by Carol P. via Yelp)

Marcel Vigneron envisions Wolf as the culinary embodiment of Los Angeles: multi-cultural, farm-to-table, and photogenic. This is not to say, of course, that Wolf is without substance. Order the crispy potatoes for an ostensibly simple dish whose flavor will wow. The potatoes are fried and paired with a chive aioli that adds complexity and a sharp kick. The beef cheeks are another standout of the dinner menu. The turmeric sauce works to heighten the meat’s tender juiciness, while the Jerusalem artichokes happily play a supporting role. In true L.A. fashion, Wolf also offers a brunch menu. Vigneron pulls an inventive and delicious twist on a breakfast staple with his Chai French Toast. 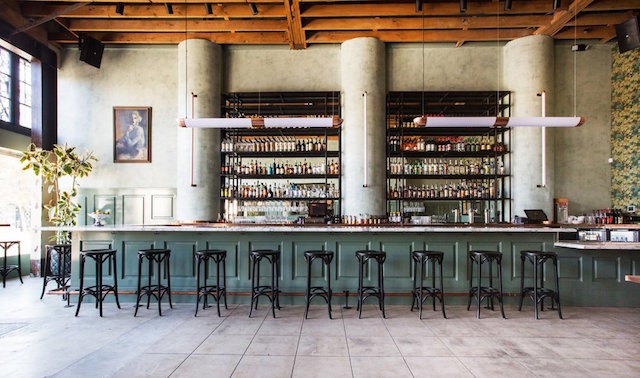 (Photo by Wade M. via Yelp)

2016 saw the continued rise of the neighborhood restaurant. Café Birdie is exactly the sort of elevated bistro we all want down the street. The menu is full of comfort foods, but with the occasional unexpected flourish. A plate of fried chicken tastes of Moroccan spices, and comes with a red harissa dipping sauce. Grilled trout uses olives to balance out the fish’s brine, and pickled haricot vert for extra acidity. Both of the restaurant’s bars (the one in the main dining room, and the detached back-bar Good Housekeeping) deliver some serious cocktails, yet never feel intimidating. The same could be said of the entire Café Birdie experience: warm, inviting, and enjoyable on every visit.