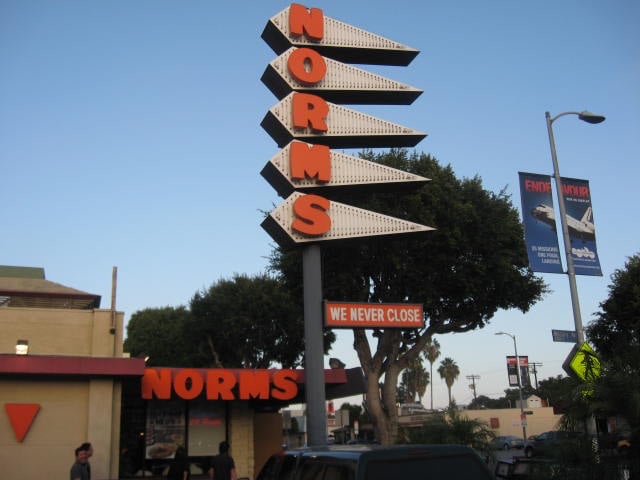 Outside the Norms on Pico. (Photo by Robert G. via Yelp)

The Norms on Pico, as we know it, may become another casualty of 2016. According to L.A. Observed, the West of Westwood Homeowner's Association (WOWHOA) has sent out an email indicating that Norms will be closing at the end of the month.

"The new owners are probably waiting to learn if Pico will be upzoned or apply under the Transit Overlay District to build a huge project on the land," the email reads.

A Transit Overlay District is, according to Metro, "a type of community development that includes a mixture of housing, office, retail and/or other commercial development and amenities integrated into a walkable neighborhood and located within a half-mile of quality public transportation." The Norms on Pico is a short distance from the Westwood/Rancho Park station, about a half a mile on foot.

The property sold for $8.25 million in 2015, and marketing documents provided by CBRE said that Norms had a lease which expired at the end of 2016 with no option to renew, according to Curbed LA.

The Norms on La Cienega was declared a Historic-Cultural Monument in May of 2015, due to its signature Googie style. That Norms is the oldest surviving restaurant in the chain, which was originally founded at Sunset and Vine in 1949 by used car salesman Norm Roybark.

Jason Illoulian, a developer with Faring Capital, told Los Angeles Magazine earlier in March of 2015 that the plan was to build around the La Cienega Norms, while Craig Hodgetts of architecture firm Hodgetts + Fung told L.A. Mag that he felt Norms wasn't the right restaurant for the changing neighborhood.

The Norms on Pico does not have Historic-Cultural Monument status, despite bearing the same architectural style, and therefore may not have the same protections.

Terri Tippit, President of WOWHOA, tells LAist that she is hoping the Norms can be saved. She says the restaurant is being priced out of the neighborhood, and that, in general, she isn't too keen on the amount of development planned for the area. Tippit has lived in the neighborhood for 43 years and says that many people in the community living on a budget enjoy the restaurant.

"We have a lot of restaurants which are great, and I go to them, but there are a lot of people in this neighborhood who have lived here a long time who are on a fixed income," she said. "[At Norms], you get a lot for your money… It's the last good, affordable place to eat."

We have reached out to Norms, and will update this post if we hear back.

Update, 3 p.m.: Norms confirmed via a statement that the Pico location will close on December 24 at 11:59 p.m. after 47 years, due to “the landlord’s intent to redevelop the property.

Norms has been a part of the Westwood community since 1969. We know that Norms will be missed by our neighbors in Westwood and we will miss serving them and being a part of this great Los Angeles neighborhood. Additionally, we have many dedicated, long-term employees at this restaurant, and we value each and every one of them. We are currently working with the Westwood team to transfer as many team members as possible to one of our other 17 Norms locations across Southern California.

Norms has sought to prevent layoffs by working with the City of Los Angeles' Rapid Response team, and by transitioning Westwood employees to other locations. Norms also intends to open two new restaurants, both somewhere within the greater L.A. region.