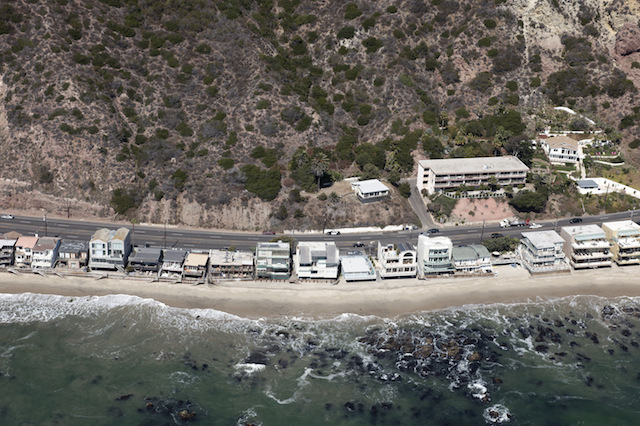 An aerial view of the shore around the Lents' property. (Photo courtesy of the California Coastal Commission)

In Malibu, one of the ever-present issues is the lack of public access to the sandy shores. The narrative has shaped out to be a struggle between everyday beachgoers and local property owners, who allegedly either want to monetize their assets, or hoard their slice of heaven. Earlier this summer, the owner of Malibu’s Paradise Cove was issued a warning from the California Coast Commission, after it was determined that the company was charging people $20 for access to the beach (which, of course, was a violation of public access laws).

On Thursday, the saga continued as the commission issued a $4.185 million fine to Warren and Henny Lent, who allegedly refused to remove impediments on their property that block the way of a prospective easement onto the beach, reports the L.A. Times.

According to the commission, the property was built in 1979, and a permit condition had required the owner to establish a public easement onto the beach. The owner never complied, and when the property was bought up by the Lents in 2002, the same stipulations were passed on to the new owners. Still, the public access way never came about.

According to commission spokesperson Noaki Schwartz, the agency had repeatedly told the Lents to fix the issue. “We've sent them maybe about 30 letters. We’ve had meetings and calls,” Schwartz told LAist. The commission adds that the Lents had been profiting off the property by renting it out to vacationers, advertising its access to the beach. The Inertia, a surfing blog, apparently found the rental listing on Vrbo—it’s priced at about $900 a night.

“I think this is a matter of justice and a matter of what does access mean and what does this mean to Southern Californians and people that want to go to the beach?” said commission Vice Chair Effie Turnbull-Sanders in a statement. “If there was ever a case where penalties should be imposed, it’s likely this case.”

The fine is notable not just for its sizable amount, but also for the fact that it’s the first fine the commission has ever levied at property owners. It wasn’t until 2014 that Governor Jerry Brown signed a bill that gave the commission power to issue fines. Before this, the commission had little to back up their sternly-worded warnings. “It was difficult and challenging. It was definitely hard to get property owners to open up access,” said Schwartz. She added that the ability to issue fines has been a big boon in recent times, and that the Lents’ fine is an anomaly. “Most of the time, when we send a letter saying that there’ll be a fine, the property owners have been great and they’ve worked with us,” said Schwartz. “We've had overwhelming success. We've been able to resolve a lot of difficult access cases.” 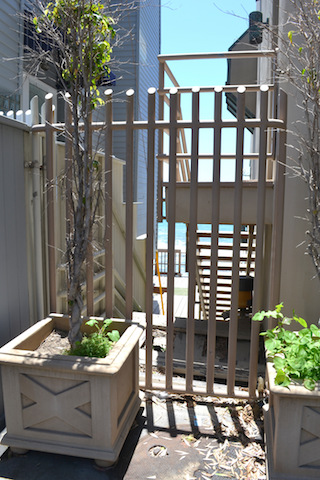 The gate leading down the stairway. (Photo courtesy of the California Coastal Commission)
As to why property owners have to provide access to the beach, it’s required by the Coastal Commissions Act that was signed in 1976. Among its other stipulations, it says that:

Public access from the nearest public roadway to the shoreline and along the coast shall be provided in new development projects except where: (1) it is inconsistent with public safety, military security needs, or the protection of fragile coastal resources, (2) adequate access exists nearby, or, (3) agriculture would be adversely affected.

Alan Block, an attorney representing the Lents, claims that his clients have not been ignoring warnings, and added that they’ve been confused by differing messages from both the commission and the Coastal Conservancy (which issues grants but doesn’t have regulatory power like the commission does). According to Block, the Conservancy had told the Lents in writing that the agency was still determining is if it was feasible to build an easement in that area, as there is a storm drain there.

The area in question involves a gate alongside Pacific Coast Highway, which leads down a stairway that ends at a landing on top of a storm drain. According to Block, upon reaching the landing, one would have to walk over to the neighbor’s stairway (the two stairs are adjacent) to get down to the beach.

“The Lents kept getting notices saying that it's not known if it's feasible to make improvements to build an easement,” Block told LAist. “As far as the Lents knowingly blocking access—they didn’t know, because they were told an easement might not be feasible.”

Block claims that the commission's action was a political one. “They are under pressure to open up access. And unfortunately the Lents are being made the scapegoat. The commission is making an example of them,” said Block. When asked how his clients will proceed with the fine, he said, “I’m going to have to discuss this more with them. But right now I’m assuming we may have to start litigation.”

According to the commission, the Lents have 30 days from Thursday to submit a removal plan for the impediments. They’ll also have 60 days to submit a plan that outlines how they’ll pay off the fine within one year from Thursday.

In a release, the commission also announced that it has agreed to a settlement with the owners of the Malibu Beach Inn at Carbon Beach. The settlement includes a $925,000 fine, and a promise from the owners that they will build two public stairways to the beach. These stairways were mandated by a permit in the past, but previous owners of the property never got around to building them.

The issue of beach access is not local to Malibu, obviously. Recently, the “Lunada Bay Boys’” exclusive fort was torn down after years of complaints from beachgoers, who said the group was harassing visitors and scaring them away from the area. Up north, the California State Lands Commission is thinking about using eminent domain to seize land from a tech billionaire, who had put up gates and warning signs to steer visitors away from the beach.

An earlier version of this article said that the Lents may either remove the barriers or pay the fine. They're actually expected by the commission to do both.