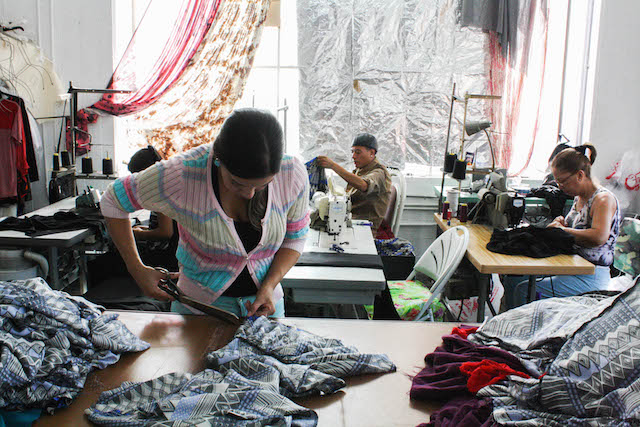 Los Angeles is widely known as a film capital, but few people realize it's also the center of the country’s garment manufacturing industry. Los Angeles houses the largest cut and sew apparel base in the U.S., and according to a new report, conditions for many of our city's garment workers are dangerous and unhealthy.

The report, which was released by the UCLA Labor Center on Friday, found that conditions in America's garment capital are "deeply unsafe and unhealthy for many of those who make what is stocked at popular clothing shops and department stores." The Labor Center's research with the Garment Worker Center (GWC) and UCLA Labor Occupational Safety and Health (UCLA LOSH) and the findings were based on interviews with several hundred garment workers.

Close to three-quarters of respondents surveyed told the Labor Center that their workplaces were brimming with dust, and 60% reported that excessive heat and dust accumulation due to poor ventilation rendered it difficult to work, and even to breathe. That dust exposure can lead to serious respiratory impairments and diseases like asthma, bronchitis, and other more acute and chronic conditions such as byssinosis (“brown lung disease”), according to the report. Additionally, more than 40% of those surveyed reported that that exits and doors in their shops were regularly blocked, which poses a critical safety concern, particularly if a fire were to break out. Nearly half of respondents observed that workplace bathrooms were soiled and unmaintained.

Although the industry has declined since the mid-1990s, there are still approximately 45,000 garment workers in Los Angeles, a number that's roughly equivalent to the entire UCLA student body, or the population of the city of Palm Springs. The majority of those 45,000 people make far less than minimum wage and work an average of 60 hours a week to provide for themselves and their families. Most of production "is concentrated in and around the Fashion District, a little bit south of downtown, but a lot are now moving to South L.A.," Garment Worker Center Organizing Coordinator Mar Martinez told LAist .

According to the California Bureau of Labor Statistics, Los Angeles' cut-and-sew workforce is predominately female (60%), skews older (70% are 35 years of age and older), and relies heavily on immigrants (71% of cut-and-sew workers are foreign born). Drilling down further, the bureau reports that 87% of sewing machine operators working in L.A.'s cut-and-sew industry are Latino. 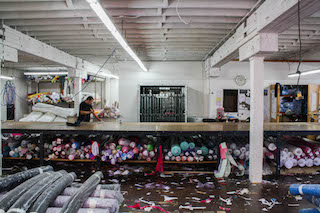 An L.A. garment workplace. (Photo via Garment Worker Center)
Payment in L.A.'s garment industry is based around something called a price rate system, where workers are compensated for each piece of clothing they produce, as opposed to a set hourly wage. This pay-per-unit system triggers increased workplace injuries, because it pressures workers to complete jobs at unsafe speeds—all while typically sitting on a metal folded chair hunched over a flat, non-adjustable workstation, performing precise and repetitious tasks for 10 to 12 hours at a time. Those inherent workplace dangers are further compounded by the fact that a staggering 82.2% of respondents had not received any workplace training prior to, or during, the course of their job. According to the report, "many laughed incredulously" when they were asked if there were emergency plans in place in case of an accident.

The price rate system also leads to large-scale wage violations, as employers often fail to make up the difference earned under the piece rate system.

According to the Garment Worker's Center, garment workers earn an average of $5.15 per hour, which is staggeringly sub-standard. As of July 1, Los Angeles has a city-mandated minimum wage of $10.50 per hour; even if a garment worker was logging 60 hour work weeks, they would still fall below the poverty line making $17,160 a year with a $5.15 hourly wage. For context, the average monthly rent for a one-bedroom apartment in a working-class area like Southeast Los Angeles is $1,414—or $16,968 a year.

And wage theft in the garment industry is nothing new: in November, the U.S. Department of Labor found that Southern California factories producing clothing for popular chains like Forever 21 and Nordstrom were paying their workers below minimum wage. The violating factories were associated with budget brands like Ross, Forever 21 and T.J. Maxx.

Martinez told LAist that the majority of garment workers are likely undocumented, which puts them at greater risk for workplace abuses, and makes them more unlikely to report violations. "Out of all the membership that we have, I know maybe three or four folks that have documentation," she said.

"[Fear of] retaliation is a huge piece of why people don't speak up about wage theft or safety conditions. I also think this is a largely neglected workforce, maybe because it's largely undocumented workforce," she said.

The range of apparel produced here in Los Angeles is wide, but it's especially focused on "fast fashion" labels like Wet Seal, Forever 21, and Charlotte Russe. Fast fashion production thrives in L.A. for a number of reasons, according to the report:


L.A. has a well-established cut and sew manufacturing base for quick, specialized, and small volume production that exists in close proximity to consumer trends, a large number of fashion company headquarters, and the Asian Pacific Rim and North American market circuit. Perhaps even more critical, the industry relies on city’s vast population of immigrant workers from Latin America and Asia for abundant low-wage labor. This workforce, despite being vital to the fast fashion industry, is frequently subject to exploitative, unhealthy, and dangerous workplace conditions.

Martinez said that fast fashion lies at the root of many the violations plaguing the industry. The demand creates "a downward pressure" that brands, retailers and manufacturers put on small factories.

"The small factories get the work from large manufacturers who essentially work for big brands like Forever 21 or Charlotte Russe or Ross and T.J. Maxx," she explained. "They look for the person who's willing to pay the least, and what that often means is that there's this race to the bottom of conditions. You can find factories where people are getting paid $4 or $5 an hour, or factories with bad pest infestations, and those are the ones that are getting the large orders from these manufacturers, because they are producing for so little.

According to the report, "low wages [in the apparel industry] are intimately connected to health and safety violations," because fast fashion's demand for increased apparel production "results in unrealistic manufacturer deadlines, which can lead to dangerous working conditions that escalate the likelihood of worker injury."

"We want these retailers to be held responsible for the conditions in which their clothing is being made," she said.

But those big retailers aren't the only responsible actors in this situation. Customers need to remember that there is almost always a larger cost to that impossibly cheap dress at Forever 21—and that that larger cost is being paid right here in Los Angeles, by our fellow Angelenos working long hours in terrible conditions.

"We're actually counting on consumers to help us put pressure on these brands," Martinez said. "The more that we have consumers talking about this and sharing this information, that's what these brands are really scared of. They're scared of their consumer base being privy to what's really going on."