In December of 1938, Franklin Delano Roosevelt was president, the Wizard of Oz was in the midst of filming, Fletcher Bowron had just ousted Frank L. Shaw as mayor of Los Angeles, and Hollywood's Earl Carroll Theatre opened to great fanfare.

The Streamline Moderne structure at 6278 Sunset Boulevard was an emblem of extravagant Hollywood glamour from its start, although it would shape-shift along with the changing city over the decades. Now, the protection and restoration of the legendary building is finally fait accompli; on Thursday, Councilmember Mitch O’Farrell approved a Historic-Cultural Monument designation for the Earl Carroll Theatre. The designation, along with an agreement O’Farrell orchestrated between property owner Essex Property Trust, Hollywood Heritage, and the Los Angeles Conservancy, will ensure that one of the last remaining examples of modern entertainment venues constructed during the height of the Golden Age will remain for decades to come.

Earl Carroll, the theater's titular helmer was a major Broadway producer and director, and was perhaps best known for his “Earl Carroll Vanities" revue, which featured hit songs "and showgirls in extravagant, often minimal, costumes." Carroll—who was nicknamed “the Troubadour of the Nude”—is also widely credited with having invented pasties as means for his scantily clad ladies to skirt the obscenity laws of the times. 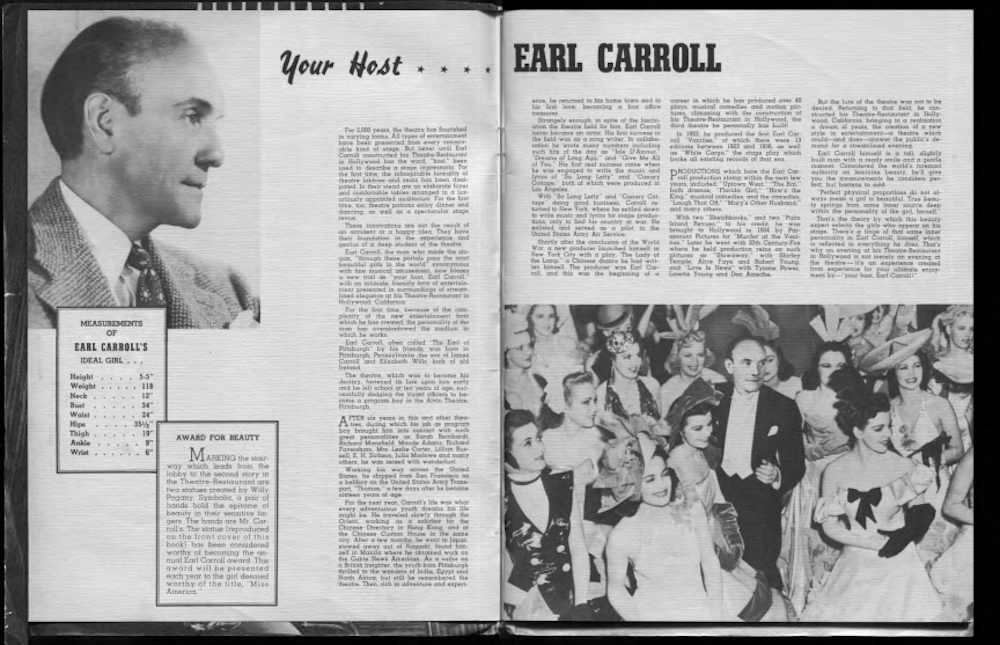 But back to Sunset Boulevard. Mr. Carroll had big plans for his theater: he wanted "to outdo Broadway by building the most modern theater in the country," according to Glamour Girls of the Silver Screen.

The Earl Carroll Theatre was built at an estimated cost of $500,000, and was designed by renowned architect Gordon B. Kaufmann (who's also responsible for the Los Angeles Times building, the Santa Anita Race Track, the Hoover Dam, and the Doheny Mansion).

Simply put, there was nothing like the glittering, 1,000-seat supper club when it opened its doors on Sunset Boulevard.

Long before the advent of dinner theater, the innovative Earl Carroll Theatre was the first to include dining, dancing and stage shows under one roof. The L.A. Times celebrated it at the time as "the first structure of its kind in the nation."

Lavish musical comedy shows unfolded across the 60-foot-wide double revolving stage and staircase; swings could descend from the ceiling on command. The theatre "expressed the unique relationship between modern technology and aesthetics and the growth of Los Angeles’ entertainment industry," according to the Conservancy.

There was a 20-foot high silhouette of Carroll's wife Beryl Wallace rendered in neon, surrounded by lettering that said "Through these portals pass the most beautiful girls in the world." Hundreds of movie stars' signatures were enshrined in concrete blocks on the theater's Wall of Fame.

Few places were as exciting in 1940s Hollywood, but the theater fell on hard times after Carroll and Wallace died in a tragic 1948 airplane crash. Carroll and his wife, along with Venita Varden, a former "Ziegfield beauty" from the Ziegfeld Follies show, were en route to the Republican National Convention at the time of the crash. Carroll's theater was sold off following his death, and it didn't revamp until 1953, when the doors of the Moulin Rouge swung open.

The short-lived Moulin Rouge night club helmed by a Las Vegas showman occupied the space for several years, before serving as a television studio later in the decade. The theater morphed again in the mid-1960s, this time transitioning from a paragon of Old Hollywood glamour into a palace of rock 'n' roll: The Hullabaloo Club, which opened in 1966.

"Where once entered the most beautiful, glamorous, elegant ladies and gentlemen, you'll now see the young people in rather strange clothes, whose main aim in life seems to be avoiding barbers and wiggling their hips," a newscaster intones in a 1966 clip about the club's opening.

Two years later, in 1968, the Hullabaloo Club became Kaleidoscope. Jefferson Airplane performed at the club's opening, with L.A. Mag reporting that the venue aimed to replicate the success of San Francisco's Fillmore Theatre.

Later that year, the theater was again renamed, this time as the Aquarius Theatre. Beryl Wallace's neon visage came down, and the exterior was bedecked in a rainbow-hued psychedelic mural painted for the opening of "Hair." Los Angeles Magazine reports that Eric Clapton, Janis Joplin, and Sal Mineo all caught performances of the musical during its two-and-a-half year run at the theater.

In July 1969, The Doors played two legendary shows at the Aquarius, along with a private rehearsal on the theater's stage the day after the second show. All three performances were recorded, and were released in 2001 as Live at the Aquarius. The mural was painted over in 1971.

The theater continued its role as a major destination for live concerts into the mid-70s. The building's final chapter as a theater ended in 1984, when the “New Earl Carroll Theater” closed. Sunset Gower Studios purchased the property later that same year, and the building transitioned to full-time use as a sound stage for television productions with associated offices.

Nickelodeon began leasing the building in 1997. It has served as the company's West Coast headquarters for the past two decades, housing sound stages and offices. The three-story structure still retains many of its original features, including its single-story, three-bay porte-cochère and thin, steel marquee, per a Cultural Heritage Commission report. In 2006, it was purchased by developer Essex Property Trust, who retained Nickelodeon as a tenant.

According to Curbed LA, Essex is building a seven-story mixed-use property next door to the former Earl Carroll Theatre. Curbed reports that a paseo will be built to connect the new development and the historic theater next door, and that the theater will likely either remain a studio space or house creative offices. Kristofer Golder, associate development manager at Essex, told LAist that Essex plans to reconstruct and install the original lighted signage on the Sunset Boulevard, including the Beryl Wallace image and the vertical lighting strips.