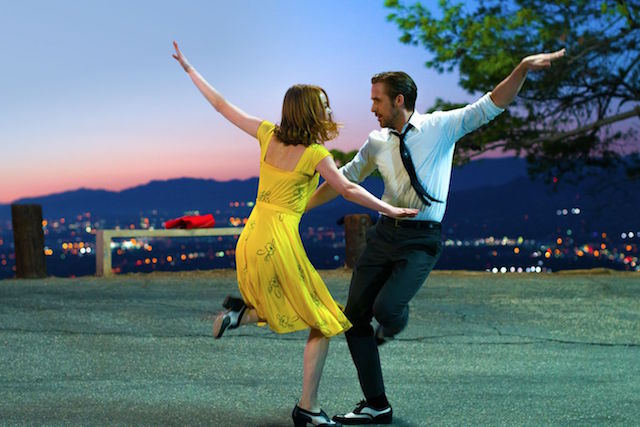 La La Land, a musical from Whiplash writer-director Damien Chazelle, clearly stands on the shoulders of giants: from Fred Astaire to Vincente Minnelli, to Jacques Demy and even Paul Thomas Anderson. But you wouldn't know how or why Chazelle appreciates them, because he does spends so much time to prove his own skill: a sweeping camera, explosive musical numbers littered with a rainbow of colors, and a technical precision with the choreography down to the most minor background actor. Given the middle-child syndrome of whether musicals can exist in today's film landscape, La La Land feels obsessed in its construction that it alone can save the genre. But perfection has a price, and La La Land's constant swooning and "look at me!" attitude is downright exhausting. It's the cinematic equivalent of being friends with Anne Hathaway.

Chazelle clearly has his passions, but there is a militancy in his direction. This worked well for Whiplash, which evolved from a music story into one about psychopaths in love. But that forced energy feels otherworldly in this tale of amateur Angelenos following their dreams. There is also of course the irony of those amateurs being two of the most perfect human specimens around: doe-eyed Emma Stone, a barista who fails audition after audition, and steely Ryan Gosling, a pianist with a love of "pure jazz." The two run through a series of accidental meet-cutes before a long stroll in the Hollywood Hills transforms into a choreographed duet (an homage to The Band Wagon). And from there, it's only a matter of time for the kindling romance to become a ballet through the city—that is, until their various artistic temperaments stand in their way.

Opening with a traffic jam on the Harbor Freeway-cum-contagious dance number, La La Land continually searches new ways for us to be impressed by its own creation. Chazelle's camera sweeps into the action in long takes, continually hoping that we go giddy for whatever it discovers as it swerves around a corner (A sudden sprinkle of snowfall? A musical troupe just out sight?). Later the camera jumps into a swimming pool and then spins around and around—maybe so much you might not notice the limited choreography or repetitive rhythmic cues. While the production design by David Wasco and costumes by Mary Zophres ignite the blue-ish skies of Linus Sandgren's cinematography with splashes of M&M colors, it seems the intimate details of dance, music, and rhythm have been given short-shrift. Chazelle makes use of its emphasis on iconic Los Angeles locations: Angels Flight, Manhattan Beach Pier, and a ballet through Griffith Observatory (where the two lovers sweep themselves into the stars). But its most touching number is simply Stone and Gosling sitting next to each other on a piano—for one brief moment, the less La La Land does, the more genuine it feels. 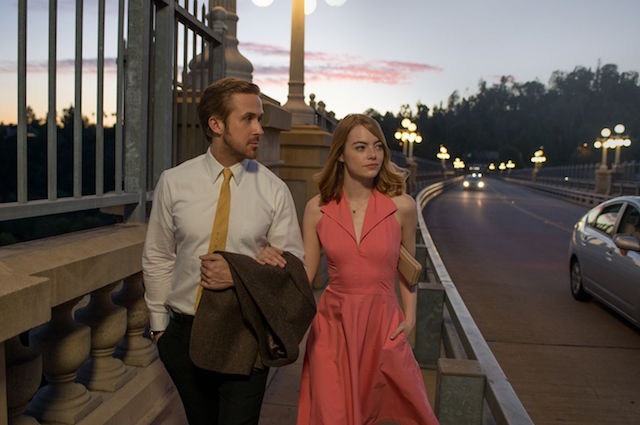 Gosling and Stone are dreamers who dream, discuss their dreams and the importance of having dreams, and will eventually fight about their dreams (there might be a pattern here). Given how emotionally charged Whiplash became, it is curious how little surface level their romance remains (for comparison, check out the intensity between Liza Minnelli and Robert De Niro in Martin Scorsese's similar New York, New York). In their big break-up scene, Chazelle frames the two in a series of plain shot-reverse shots, while the actors' monotone voices do little to express their clearly hurt feelings. Stone and Gosling have built star personas—she's a dorky wannabe, he's a brooding authentic—but their best work here is left only in the dancing, leaving the film emotionally stunted. La La Land only comes alive when it's pure dance; the film's finale—An American In Paris by way of 25th Hour—pulls out every stop to make sure we're swept up in its energy, but one wishes the emotions matched the display.

Just as the film opens, Chazelle includes a joke that perhaps centers the core of La La Land's problems. A cropped of title card for Cinema-Scope in black and white suddenly expands out in color and full widescreen as a Wizard of Oz moment. But it reminded me that so many of the great musicals existed in a boxy 4:3 frame and in black and white—it was not their technical details that made them great, but the ebullience that began with a first step building slowly and slowly toward a crescendo. La La Land would rather grab us full throttle from the start. Whenever it slows, a creeping emptiness takes hold.