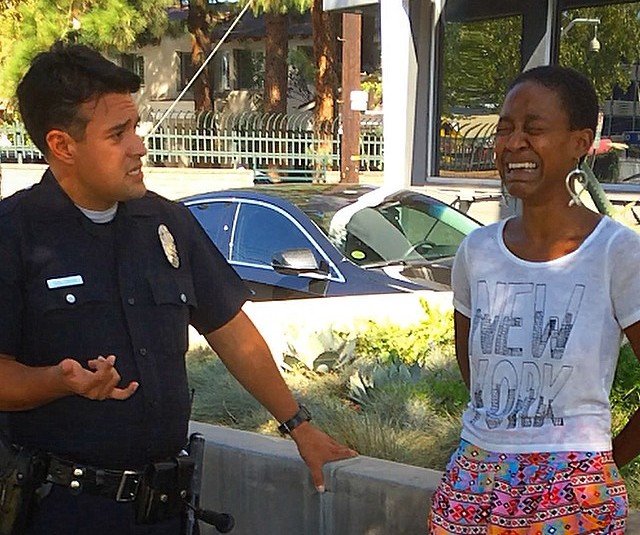 A former LAPD sergeant was facing a $10,000 fine for leaking audio of his controversial encounter with an actress who accused him racial profiling. On Tuesday morning, the Los Angeles Ethics Commission ruled that he did break the rules by leaking the tape to TMZ, but the retired officer was slapped with only a $500 fine.

According to the L.A. Times, the Ethics Commission ruled that Parker not only shared confidential information, but also gained "a private advantage for himself" with the leak.

"I'm appalled they came to this conclusion," Craig Lally of the Los Angeles Police Protective League told LAist. "I did the exact same thing Sgt. Parker did on the O.J. Simpson case... I never was [hit] with any ethics violation."

Parker's attorney, Lawrence Hanna, contends that the sergeant broke no city rules with his actions, saying they would be filing a writ contending that the Ethics Commission didn't follow the rules with their ruling. Hanna also said they are contemplating a civil lawsuit.

"It's not for the Ethics Commission to decide what is confidential and what is not," Hanna told LAist. "It's up to the chief of police, and he didn't weigh in on this case."

Back in September 11, 2014, Parker was responding to a call that actress Daniele Watts (best known for a role in Django Unchained) and her boyfriend Brian Lucas were having sex in a car in Studio City. Watts accused the officer of racial profiling during the encounter, saying on the recording, "Do you know how many times I've been called, the cops have been called, just for being black?" Watts was handcuffed during the encounter, but was released after her boyfriend presented their IDs to the responding officers.

Watts later accused the officer of racial profiling as well as thinking she was a prostitute because her boyfriend is white. Four days later, Parker released the tape to TMZ in an effort to defend his actions. An internal investigation was launched over Parker's actions, and the sergeant eventually retired in June of 2015.

As for Watts and Lucas, the couple eventually plead no contest for disturbing the peace after prosecutors initially sought lewd conduct charges. Watts was later ordered to apologize to the officers she accused of racial profiling... sincerely.