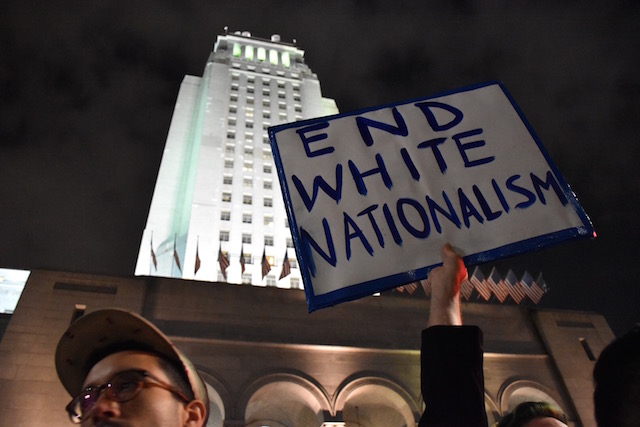 Earlier this month, President-elect Donald Trump’s incoming White House Chief of Staff Reince Priebus told CNN that the Trump Administration will consider withholding federal funds from the City of Los Angeles if it fails to cooperate with the Administration’s draconian immigration proposals. These proposals include unspecified plans to deport millions of people, including children, currently living in the United States without official legal status.

A significant amount of money is at stake. Just this year, Los Angeles will receive upwards of $500 million in federal funds to support a variety of programs relied upon by tens if not hundreds of thousands of Angelenos—altogether, more than 5% of the city’s $8.78 billion annual budget comes from the federal government. If the Trump Administration stands on its threat, Los Angeles will face a rending moral quandary concerning which of its many millions of citizens to damn.

But it needn’t come to that. Thanks to an arcane constitutional rule that protects states' rights known as the “anti-commandeering doctrine,” Los Angeles can and should sue the federal government if it tries to force the city’s hand.

This is where the Trump Administration’s threat to withhold all of L.A.’s federal funding falls apart. Because the President cannot unilaterally allocate or rescind federal funds on his own, he would need to order the Republican Congress to pass a bill that conditions L.A.’s federal funding on the city’s cooperation with the enforcement of federal immigration policies.

As an initial matter, that bill could not constitutionally condition all of the federal funding Los Angeles receives simply because not all federal dollars received by the city reasonably relate to immigration enforcement. Any immigration bill that tried to strip the city of federal funds entirely would consequently fall flat on its face.

In a bit of irony, that was the Supreme Court's exact ruling in 2012, when it struck down a component of the Affordable Care Act’s Medicaid expansion at the behest of today’s right-wing know-nothings’ Tea Party antecedents.

In that case, conservatives challenged a provision of the Affordable Care Act that gave states the choice between accepting broader enrollment requirements for Medicaid and receiving some additional federal funds to pay for it, or declining the enrollment expansion and relinquishing all of their existing Medicaid funding. The Court agreed with the challengers, writing that when the federal government proposes funding conditions that “take the form of threats to terminate other significant independent grants, the conditions are properly viewed as a means of pressuring the States to accept policy changes” that run afoul of the anti-commandeering doctrine’s bar on coercion. A functionally analogous anti-immigration funding bill that threatens to strip previously granted federal law enforcement funding would be equally coercive, and would fail for the same reason.

Our nation has a sordid history of invoking states' rights doctrines to stall the advance of a more tolerant and equal society. Facing a President Trump, progressive cities like Los Angeles have an obligation to turn the tables.

Adam Sieff is an attorney in Los Angeles. He serves as an advisory board member for the Lawyers’ Committee for Civil Rights Under Law, and is a member of the Mid-City West Community Council.