A Beginner's Guide To Arepas, And Where To Get Them In L.A. 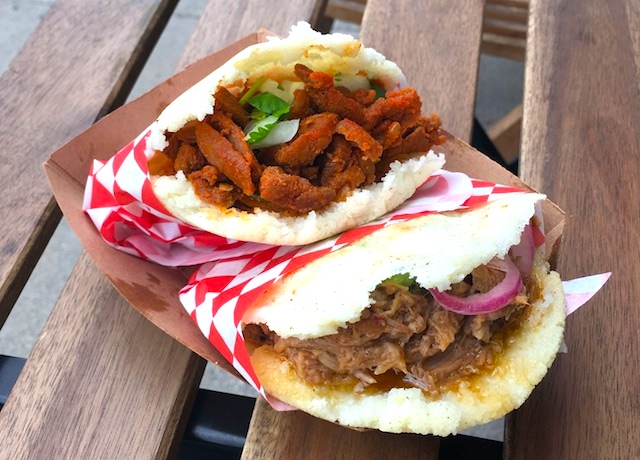 The K-Town and the Rumbera at Sus Arepas. (Photo by Tim Loc/LAist)

Arepas are patties of cornmeal or corn flour heated to a golden brown on a frying pan (they may also be baked or grilled). They're a staple of Venezuelan and Colombian street food, and as likely to served for breakfast as a late-night snack in their native South America. According to Serious Eats, arepas are traditionally made by soaking and pounding dried corn into a moist dough before shaping and cooking it, though using pre-cooked, dehydrated arepa flour (called masarepa) is more common today.

One popular preparation is to transform them into something like a pita pocket; you slice them down the middle to turn them into a baseball mitt, and then you pile on the goods. Each serving is about the size of your palm, but it'd be inaccurate to call them "small," as they're loaded with everything ranging from roast pork, carne mechada, scrambled eggs, cheese, and avocado. The motto seems to be: if you can put it in your mouth, you can put it in an arepa.

They're no strangers to Los Angeles. You can get wonderful renditions of them at Cafe Bolivar in Santa Monica or at Amara in Pasadena. But considering the homespun nature of the "sandwich," as well as its portable stature, you'd think it'd be easier to get them on the fly (as opposed to sitting down at a restaurant every time you have a hankering).

There are, indeed, are a handful of places where you can grab them on the quick. The Cali Fresh Truck slings out arepas as well as other Colombian fare. There's also the Zema Food Truck, which takes on a Venezuelan slant. Sus Arepas, too, joined the ranks earlier this summer, and has been spending its weekends at Smorgasburg LA and on the streets of Eagle Rock. 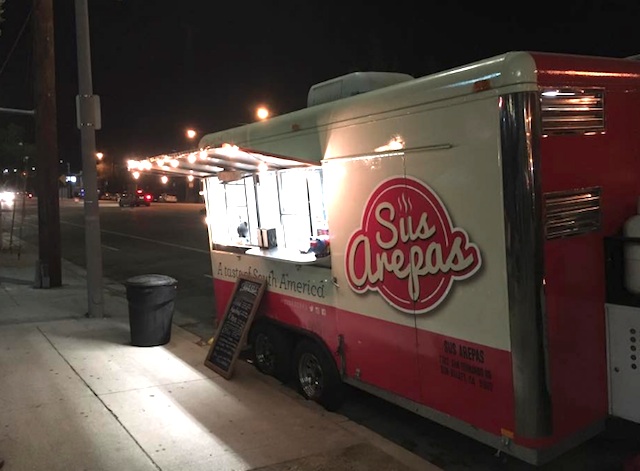 The truck in Eagle Rock. (Photo by Sus Arepas/Facebook)

Sus Arepas doesn't quite have a flair for the dramatic. They don't offer, say, a sandwich packed with grilled shrimp that's also doused in Huancaína sauce (which Zema does). The fare here is more straightforward. On the day of our visit, there was a pulled pork sandwich, as well as a Korean barbecue entry (which feels almost obligatory for any L.A.-minded menu).

While not exactly inventive, the arepas here are delectable. The arepa cakes are thin to the point of being a wafer, but there's something about the crisp of the outer shell that's hard to resist. The gentle crack, as well as the faint sweetness from the corn, makes every bite feel like a novelty. Even as you feel yourself getting full, you're encouraged to take another hit, and another.

The "rumbera" is piled with pulled pork that's rightfully tender and colored with the zest of pickled onions. The "K-town" does without the spice of kimchi, opting instead for the sugared tones of bulgogi. And the "reina" is stuffed with chicken salad and a generous slather of avocado. For the uninitiated, the "original" may be the most revealing of the pack. It's packed with plantains, queso fresco and beans. Both lean and satisfying, it cuts a fine line in all directions. If you're hungry, it becomes a meal. If you're full, you can trick yourself into thinking it's a dessert. The sandwich is a kind of tasty Rorschach test.

The listing we've provided here is by no means comprehensive; the menu changes on occasion, and you may see breakfast arepas, or vegan options too. Curiously, all the trucks mentioned here opened earlier this year. Is it indicative of a new arepas renaissance in the Southland? Here's hoping.

Sus Arepas is often found in Eagle Rock on Saturdays and at Smorgasburg LA in downtown on Sundays. Check for times and location on their Twitter. You can similarly find the Cali Fresh Truck and the Zema Food Truck on their Twitter accounts. Cafe Bolivar is located at 1741 Ocean Park Blvd, Santa Monica, (310) 581-2344. Amara Chocolate & Coffee is located at 55 S Raymond Ave, Pasadena, (626) 744-1765.