After a much-hyped opening last year in New York, the Will Ferrell-themed bar finally lands in Hollywood for a 10-day pop-up.

On Monday, December 5, the Stay Classy Bar opens at the TCL Chinese 6 Theatres—not the Chinese Theatre itself, but the multiplex in the mall next door. Over a dozen of Stay Classy's, er, classy cocktails will be available, including A Whale's Vagina, Big Foot's Dick, and the Smelly Pirate Hooker. Zach Neil, who co-founded Stay Classy, told LAist that there'll be new L.A.-only drinks at the pop-up, as well as events that utilize the larger space available to them. Free from the constraints from their cramped Lower East Side space, Neil says there'll be Anchorman- and Elf-themed dance parties. 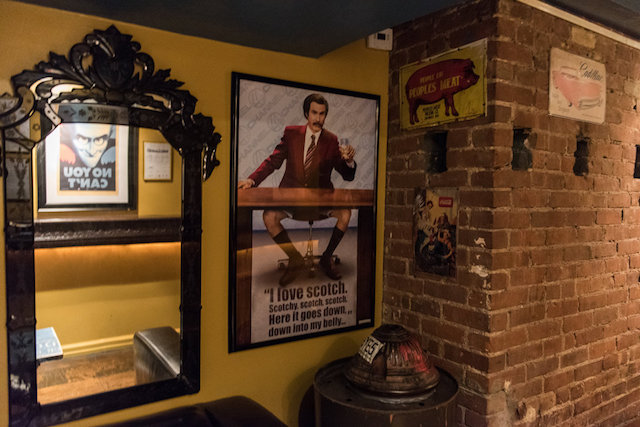 And while there's no shortage of high-concept restaurants in the world (in fact, Neil also opened the Tim Burton-themed Beetle House and the short-lived 'Merica), Neil says Will Ferrell was the perfect choice for a bar. "Will represents pure, dumbed down humor," Neil told LAist. "A lot of people go to bars to drown their sorrows, or because they are having a shitty day. When you come to one of our places we are maximizing the fun, maximizing the smiles and nobody is going to be sad while they are there. Will to me is a visual anti-depressant and I simply love his work."

While walk-ins are welcome for Stay Classy's L.A. pop-up, it's suggested you RSVP by texting the word "classy" to (929) 291-0337. According to Eater, Stay Classy might take root in Southern California if the pop-up does well.

Ferrell himself is not directly involved with Stay Classy, but proceeds benefit his charity Cancer For College, which grants scholarships to students with cancer. And Eater hints that "Ron Burgundy himself" might be show up to be be a bartender.

Stay Classy Bar will be at the TCL Chinese 6 Theaters from December 5 to 15. 6801 Hollywood Blvd. in the Hollywood and Highland Center.