Photos: El Segundo's Vintage Movie Theater (And Its Massive Wurlitzer Organ) Takes You Back To The 1920s

A silent movie theater? Replete with a 2,600-pipe organ that's almost a century old? It sounds like an anomaly, wherever it may be found. But it's perhaps even more surprising to know that the theater—the Old Town Music Hall—is located in the spread of El Segundo, which is perhaps better known as a hub for aerospace companies (Raytheon and Northrop Grumman have facilities here) and for the Toyota Sports Center, where the L.A. Kings practice.

As documented by KPCC, the theater's origin is fairly straightforward. Owners Bill Field and Bill Coffman were organ enthusiasts who heard that The West Coast Theater in Long Beach was relinquishing its "Mighty Wurlitzer," considered to be one of the most formidable of theater organs in existence. The pair bought up the organ. Then came the matter of where, exactly, to store the giant instrument. They found a listing in the Daily Breeze for the vacant El Segundo State Theater; they put down money for that as well.

This, in a nutshell, was how the Old Town Music Hall came to existence in 1968. Since then, it has regularly hosted musical acts that range from jazz to ragtime. There are also the screenings of silent films, of course, which are accompanied with Field's playing on the organ (Coffman passed away in 2001). The theater also shows regular "talkies" such as Casablanca.

The decor, which includes chandeliers, intricate ceiling tiles, and sprawling red curtains, gives a nod to the silent theaters of the 1920s and '30s. The most impressive set-piece, though, is the massive Wurlitzer organ.

As Field tells LAist, the organ was likely constructed around 1924 in New York, and adds that the instrument went out of production around 1948, making it a rarity. "And a lot of the remaining ones are in homes, rather than public places, because people collect them," Field told LAist. Considering all this, you may think that the organ is treated with the careful hands of reverence. And it is, but it's also given a festive flair, as it's trimmed with bright, DayGlo colors.

Field plays what is called "incidental music" during the movie screenings (basically, the songs are improvised on the spot). Field also belts out old favorites right before the screenings, and plays during a sing-along where the crowd joins in. As noted at the theater's website, the organ is not for amateurs:

The organ console has four keyboards, 260 switches, and an array of controls and pedals. From the console, the organist controls the pipes and many percussive instruments, such as a xylophone, marimba, piano, drums, and cymbals. The entire system is air-powered from a 10-horsepower Spencer Turbine Orgoblo.

Considering that Wurlitzer organs aren't all too common, and the difficulty in playing the instrument, it's no surprise that you don't bump into many Wurlitzer experts these days. The desire to pass on the knowledge, however, is alive. "There's an American Theater Organ Society, and there are a lot of young artists coming up there and they're really tremendous," said Field. That's great news for the rest of us, who, up till now, probably never appreciated the importance of theater organists.

Anyway, if you've never made a trek out to El Segundo, you now have a new (but old) reason to do so in the near future. 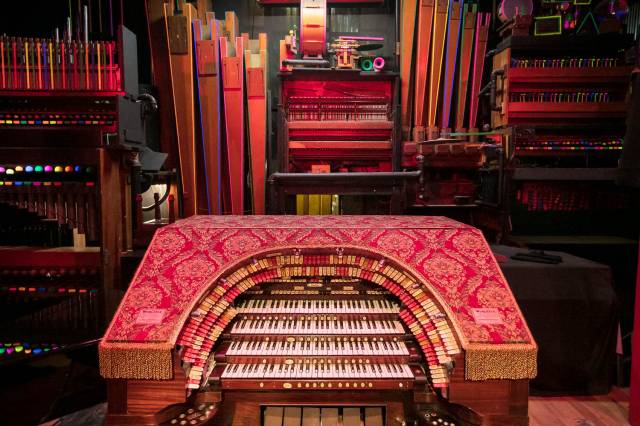