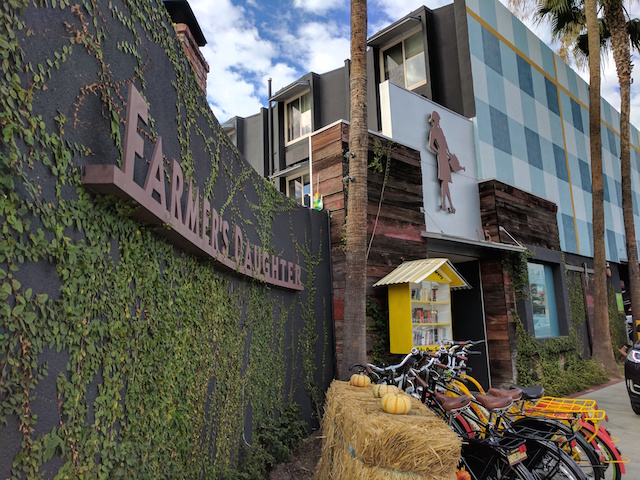 The farmer's daughter, in fiction, is an attractive, pure-hearted young woman who grew up on a bucolic farm. She's Daisy Duke. She's Dolores Abernathy of Westworld. She's Mary Ann, stranded on an uncharted desert isle. Technically, she's even The Walking Dead's Maggie Greene. She appears in songs, she's a central character in crass tavern jokes, and she turns up in many an adult film. But in Los Angeles, Farmer's Daughter is also a hotel.

Peter and Ellen Picataggio bought the Farmer's Daughter Hotel on Fairfax Avenue in 1997. At that time, Ellen said it already bore its peculiar name, but it was something of a "no-tell motel." It'd been there since the '60s, had its halcyon days through the '70s, and fell into disarray thereafter. For a short period of time, it was a Best Western, but not when the Picataggios got their hands on it. Ellen described the owner they got the property from as "absentee." 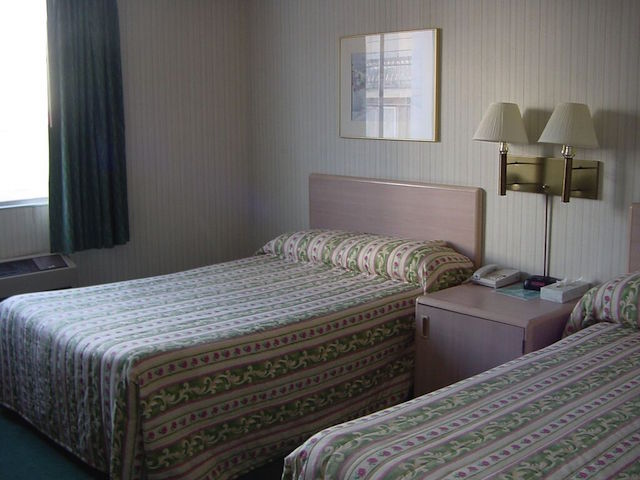 This is what the rooms looked like when the Picataggios bought the place. (Photo via Farmer's Daughter Hotel)

Looking at old photos supplied by the Picataggios reveals the kind of unremarkable, bland, yet oddly endearing decor of any mediocre American motel. The off-white bathroom with the hair dryer attached to the wall, the small closet stacked with unused phonebooks, the green carpeting you rarely see outside of motels and dated transit hubs, and the plain bed, dressed in pink and green patterned comforters, positioned beneath uninspired paintings of ambiguous landscapes. These pedestrian rooms served as the accommodation for many a CBS studio guest, including those who went to sleep dreaming of spinning The Big Wheel and winning a lump sum from Bob Barker. The sign was a big, yellow roadside eye-catcher, with a smaller marquee below that read, "Our Rooms Are Tops" on one side and "Extra Nice Rooms" on the other.

"Gotta love the cheap art on the wall," Peter said of the old rooms. "I think I might have kept a piece somewhere just for fun and memories. Never forget where you came from."

The original yellow sign, too, is now a part of the hotel's office. 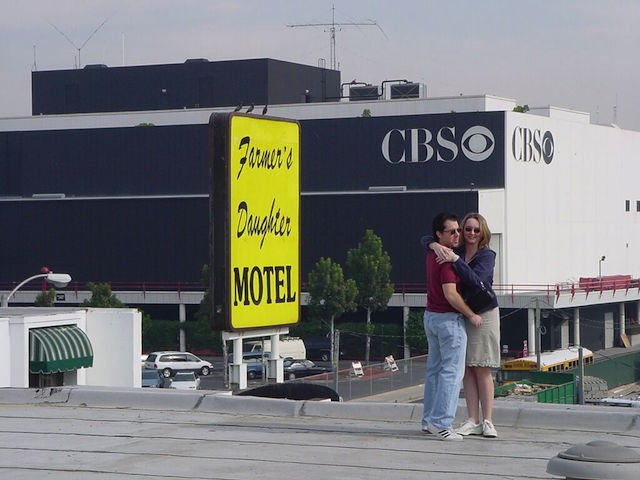 Friends of the Picataggios enjoy a Grove-less view prior to the hotel's first round of renovations in the early 2000s. The Grove opened in 2002. (Photo via Farmer's Daughter Hotel)

Before the Picataggios took over, you could get a room by the week or the month, and you had to trade your driver's license for the remote to your room's television. Ellen said the whole front area of the property was blacktop, meaning you drove straight up to your room. Standard motel stuff.

"It was loud. There were no public spaces to hang out, nowhere to socialize," she said. 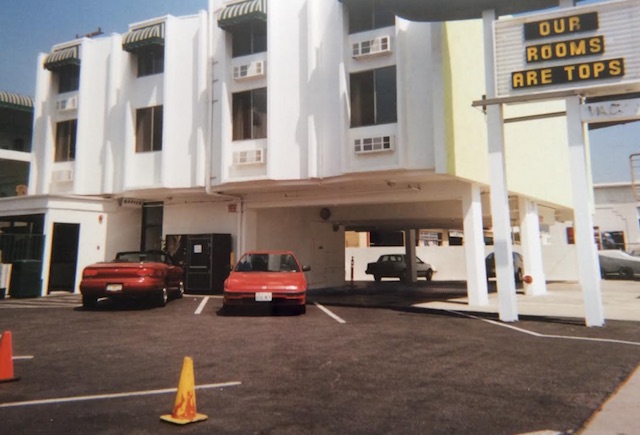 "Our Rooms Are Tops" (Photo via Farmer's Daughter Hotel)

Peter, who came from Silicon Valley, and Ellen, whose background is in design, aspired to turn the hotel around. They stuck with the name and used it as inspiration for their aesthetic. They renovated the hotel for the first time the early 2000s. They redecorated with the help of their friend, artist Jessie Azzarin, who supplied bright paintings of vegetables, animals, and laundry hung to dry. And, at least one piece that depicted two pieces of bacon, drifting hopelessly in the vacuum of outer space. So, suffice it to say, the hotel's long had a sense of humor. Azzarin still works with the Picataggios on original artwork for the hotel to this day. 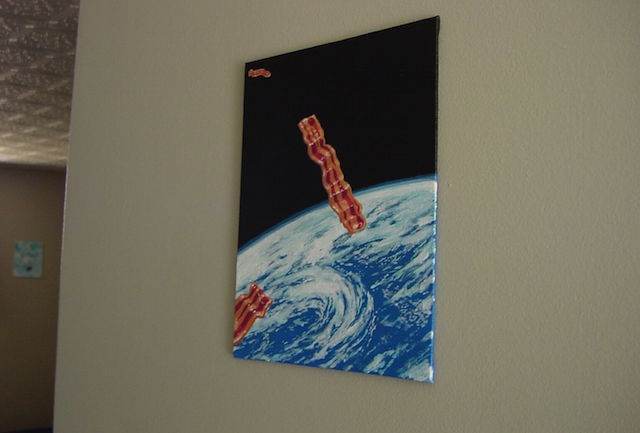 The kitschy gingham print exterior and the logo of a woman with braids and a watering can that would soon enter the hotel's branding paid homage to the agrarian theme as well. They've also kept birds in the lobby for the past several years, purchased at a nearby pet shop that's no longer around. The birds chirp as guests check in and out.

But they also chose to offer subtle nods to the hotel's former seedier side, naming their restaurant TART, and slyly adding sexier notes to the design. Peer into one of the peep holes found in the towel dispensers in the hotel bar's bathrooms, for instance, and you'll see a photo of a woman that's decidedly NSFW. The No Tell suite has a mirrored ceiling and headboard. You can also buy yourself a pair of branded underwear, if it suits you.

TART is known for its hip, boozy brunches, where you can get a discount if you'll jump in their pool fully dressed. Go there for dinner and we'd suggest the braised oxtail cavatelli or the crispy brussels sprouts, which come in a lime creme sauce and topped with a fried egg. And, of course, you'll want to finish it all off with one of their home-made pies. 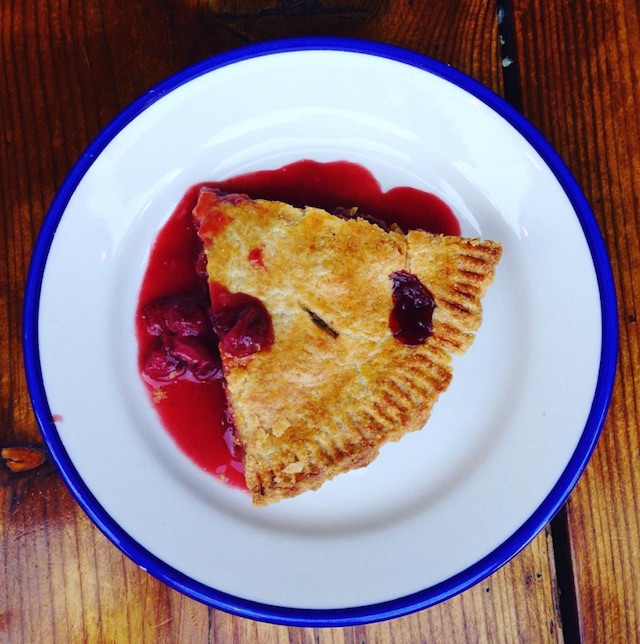 But before TART, there was The Olive Club. Ellen described it as one of the "first lounge/restaurant clubs" in L.A., but that's something of an understatement.

Olive opened in 1990. It was a clandestine hotspot with an unlisted phone number and no sign. Sean MacPherson—who was involved with Bar Marmont and El Carmen, and who now opens trendy hotels in New York—was a co-owner with Jon Sidel. The pair would also open Good Luck Bar, Swingers and Jones Hollywood. The food came via Chef Fred Eric (Fred 62, Tiara Cafe), and celebrities like Julia Roberts and Jason Patric dined there. Jonathan Gold, then at Gourmet said it was "decorated like a harlequin's jockstrap." The L.A. Times described it in 1991 as dark and crowded, full of patrons who had the sartorial sense of David Lynch characters—perhaps the brooding James Hurley or Donna Hayward, after she takes up smoking.

Barton Fink might have hung out here, had he been a bit trendier and had a sublet on Melrose. The bar is populated with screenwriters straight off the plane from New York, writer/actors, producer/writers, director/actors and just plain actors, many of whom earn their living waiting tables at other establishments. There are also garmentos and music video folk and someone who said cryptically only that he was doing business in Russia. Most of the people in the crowd are in their 20s; 40-year-olds beware. Here you will look old. The dress mode is straight from the mind of David Lynch—dyed black hair, hoop earrings and black leather motorcycle jackets on both sexes. Smoking is de rigueur and a cigarette machine is conveniently positioned inside the entrance. Along with smoke, recordings of lounge tunes from throughout the decades pervade, although it's far too noisy to make out any particular tune. The place is dark and windowless and the walls are painted with circus-like harlequin patterns. The New Yorkers say they think Olive is "New York-y" because it's so small, dark and crowded.

The Times' food writer at the time, Ruth Reichl, was not so favorable. She said it was dark, loud and expensive with "lousy service." The $8 hamburger was, in her opinion, their best dish.

"Most of the people who work there—the maitre d' who takes you to your table while talking officiously into a portable phone, the waiter who shows up with cold food an hour after you've ordered it—appear to believe you're lucky to be eating there," she wrote.

Had you tried to beguile your way in, you would have had to deal with the bouncers, one of whom was an aspiring actor named Mark Ruffalo. He hated that gig, telling Los Angeles Magazine in 2002, "It came to the point where I basically and quite unabashedly hated the people who walked up to Olive's door because they were so obnoxious and entitled."

The hotel is a common spot for contestants on The Price is Right. CBS Television has been across the street from the site of the hotel since 1952, replacing Gilmore Stadium. The Picataggios noticed that they were hosting so many Price is Right guests that they created a "Wall of Winners" at one point. 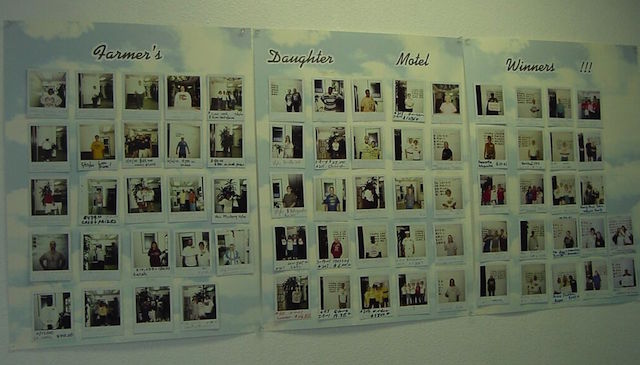 Come on down! (Photo via Farmer's Daughter Hotel)

"If [our guests] won, we would take a photo of them and post it on the wall. That became sort of a cult thing that all our guests knew about and if they won, they started asking us to get the camera out and to go up on the wall," Peter said.

The 66-room hotel is currently in yet another new phase. The hotel's Barn Rooms are going through a remodel, which should be complete by the end of the year. These rooms will have an industrial feel, but rustic touches like denim bench seating, barn doors and country-themed murals. The rooms will also have an original piece of art—each unique work depicting what "farm" means to the individual artist—contained within a shadowbox, nestled into a work desk. 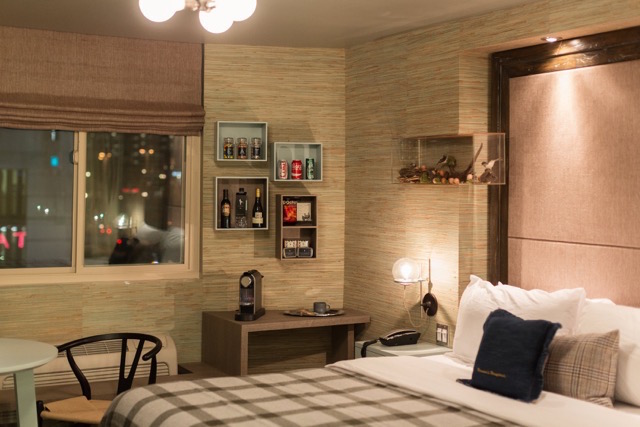 The hotel's Robin Rooms, which were most recently updated beginning in 2015, have grass cloth wallpaper, original artwork, and a selection of novels to read. If none of them please a guest, they could also stop by the take-one-leave-one library located near the hotel's entrance on Fairfax.

"I think we've come a long way from the times when people were renting by the hour or month," Ellen said. "A lot of people leave these motels, for whatever reason, and I feel like the spirit of the quirky motel is still alive, it's just grown up."