Some Pot Shops Are Already Selling To Everyone, Despite Questionable Legality 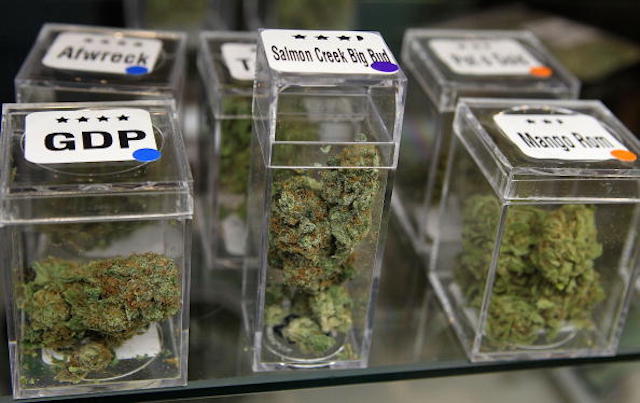 Los Angeles residents may not have to wait until January 1, 2018, to legally purchase their marijuana from a dispensary.

Let's backtrack for a minute: when Proposition 64 passed on November 8, personal marijuana use became legal for all of-age Californians, effective immediately. However, in a slightly confusing twist, the adult-use sale of recreational marijuana won't actually be legal until January 2018 (at which point it will be subject to state and individual city licensing laws). And, according to our friends at SFist, for the time being your neighborhood dispensary still can't legally sell to anyone who doesn't have a medical marijuana card, as said dispensaries are only licensed to sell medical marijuana.

Yet, according to The California Weed Blog, at least three area dispensaries have already opened their doors to anyone 21 and older, regardless of a medical marijuana card.

“21 years and older may enter with no doctors recommendation,” Mr. Nice Guy, a dispensary in downtown L.A. posted to their WeedMaps page, “however those 21 and under are still required to have a rec.”

According to Richlin, Prop. 64, for better or worse, put the licensing of marijuana dispensaries, and thus the actual legalization of its sale, into the hands of the cities.

“There are 88 cities in Los Angeles County, plus county land, plus the city of Los Angeles,” Richlin said. “So there will be 90 different rules under L.A. County alone. It will be a checkerboard of different laws. It’s insane.”

The Bureau of Marijuana Control is the official state agency that will license commercial sale of marijuana, notes Ballotpedia. However, in addition, local governments (counties, cities, etc.) are allowed to require their own licensing.

When reached for comment, an employee of Mr. Nice Guy said, “We don’t really know how it’s going to work either.” The employee also confirmed that the dispensary was currently selling to everyone 21 and over, regardless of whether or not they were in possession of a medical marijuana card.

“I think those entrepreneurs that have a [local] license are going to do well,” Lance Rogers, a marijuana lawyer with Greenspoon Marder, told the L.A. Times. “I think those businesses that put their head in the sand and believe that they can still operate in the gray are in for a rude awakening.”

Richlin added, “the question now is: does law enforcement have the resources to waste on what we [Californians] deem not a big deal?”

Pot shops Green Light District in Van Nuys, and Cannaclub 30 in Compton, have also advertised a policy welcoming anyone 21 or older, however, neither could be reached to verify.

So, yes, these dispensaries may technically be selling to some illegally, but marijuana has always done business in a certain haze.