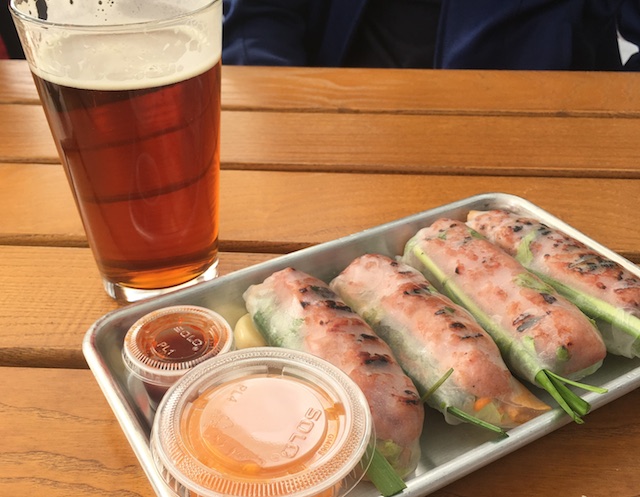 What's on the drink menu at a Vietnamese restaurant? There's the ever popular iced coffee, ca phe sua da, of course. You can also go with soda chanh (lime soda) for something spritely, or nuoc rau ma (pennywort juice) if you're in the grips of a horrifying detox.

There are plenty of options to be found. But take a gander at the beer listing and you'll find only a small roster of the most common, mass-distributed lagers (think: Heineken or Tsingtao). Why the paltry selection? My guess is that it has to do with a number of factors, one being that the best Vietnamese joints are focused in the suburban towns of the San Gabriel Valley—the restaurants are a family affair, less so a mead hall for drinking and carousing. Another reason, possibly, is that the relatively insular SGV neighborhoods have allowed the restaurants to stick with tradition. Which is to say that the word "fusion" may elicit some eye-rolling, and that the old hands will stand by the refreshing lagers they've grown up with. A mealy glass of stout? No, thanks.

But here comes Summer Rolls, which opened this October in Temple City. As owner Tony Lam informs LAist, the restaurant is about amping up the fast-casual aspects of Vietnamese cuisine. "What we're trying to do is like Vietnamese street food," said Lam. "The idea is simply for people to be eating and drinking." And what about the rotating list of beers on tap? "Craft beers, obviously, have become very popular. And it's something that really appeals to a younger crowd," said Lam.

The restaurant is an offshoot of their Rosemead location. Lam's enthusiasm for craft beer couldn't be translated there, he tells LAist, because the locale is situated next to a school. Thus, the new spot in Temple City. The expansion is more than just a matter of beer, however. There's a whole revamping of ethos. This Summer Rolls eschews the trappings of waiter service (you order up at the counter) and the decor is lean and minimal. There's also a leisurely, outdoor patio, replete with shades and cushioned seats. 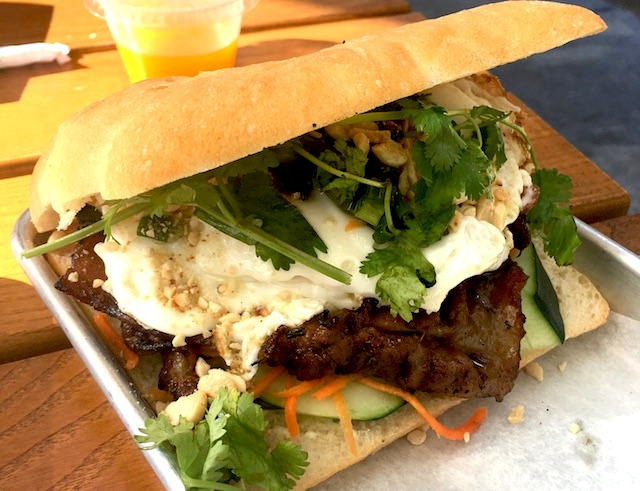 Lam references street food, and the philosophy is about easy service, but make no mistake, the servings here are generous. Take their banh mi, for example. Loaded with a hunk of charbroiled pork shoulder, and topped with a runny egg, the sandwich is big enough to be shared. You may be wary of the ciabatta bread, which replaces the more traditional French baguette. But the roll, which is slim and supple, makes room for the proteins to take center stage. The banh xeo (a loaded crepe, for lack of a better description) is nicely crisp on the surface, and liberally packed with shrimp, calamari, oyster mushrooms, and bean sprouts.

And while this location does away with soup noodles (sorry, no pho for you), you can still find an assortment of bun (vermicelli) and com tam (broken rice) bowls that, depending on your mood, may be topped with nem nuong (grilled pork sausage that's fused with fish sauce), thit nuong (sliced charbroiled pork), as well as some beef and chicken options. If you're not bound by dietary restrictions, however, we recommend that you side with the pig. 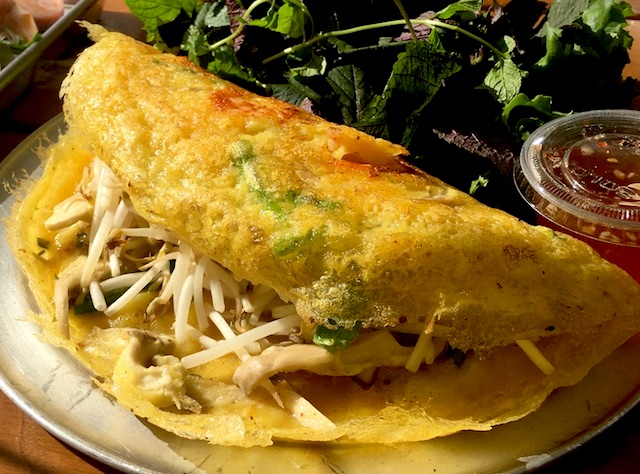 You don't have to go big, though. You can scale it back and get the titular summer rolls (which are un-fried, as spring rolls sometimes are). At many Vietnamese restaurants, the rolls come out as a spread of their constituent parts, meaning you'll have to make the rolls yourself. Here, the rolls come ready made, which falls in line with the restaurant's motto of maximum ease. Each serving comes with four rolls, which are wrapped in rice paper and filled with vermicelli, greens, and a pencil-thin crisp. Again, you get your choice of meat. And, again, we recommend the nem nuong, which marries the sweet tang of fish sauce with the smokiness of charcoal (it's done very well here and at the Rosemead location). Some people may be of the perception that summer rolls are light and clean-tasting. And they are, but the hefty portions of meat, as well as the delectable pang of the dipping sauce, make for a wholly gratifying bite. 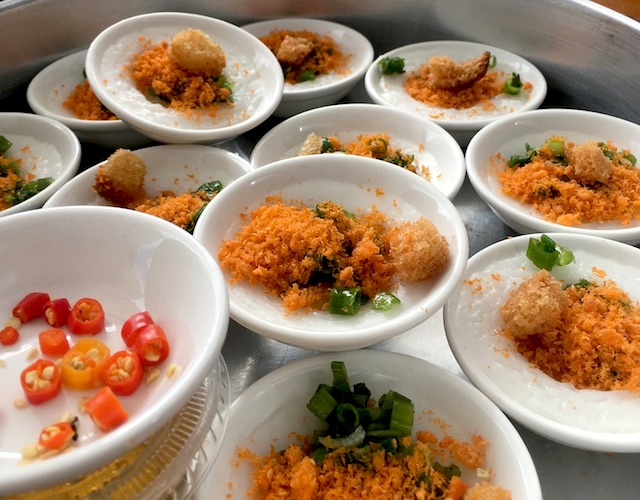 If you're feeling especially ravenous, you can also order a batch of banh beo, which are small pads of steamed rice cakes toped with ground shrimp. It's simple, yes, but when slathered with fish sauce it's the perfect side plate to give you a change of scenery.

And yes, there are the beers. There's a rotating tap list. On the day of our visit, there were 12 selections from vaunted breweries such as Oregon's Deschutes, the Bay Area's Almanac, and the local Iron Triangle. The pickings lean towards the crisp taste of saisons and Belgian ales, with strong wafts of fruity and floral notes. They're perfect for keeping up your stamina during a marathon of gorging. But there were also a couple options for dark ales that have a creamier body, so you're covered no matter what your predilection is.

Seeing as how there are so many routes to pick from (in terms of both food and beer), Summer Rolls may seem like a complicated affair. But, compared to many Vietnamese joints (including their Rosemead location), the menu here is focused and pared down. Which is to say that Summer Rolls sticks with what they do best; all you have to do is point at a direction and go. Here, there's no such thing as a wrong move.