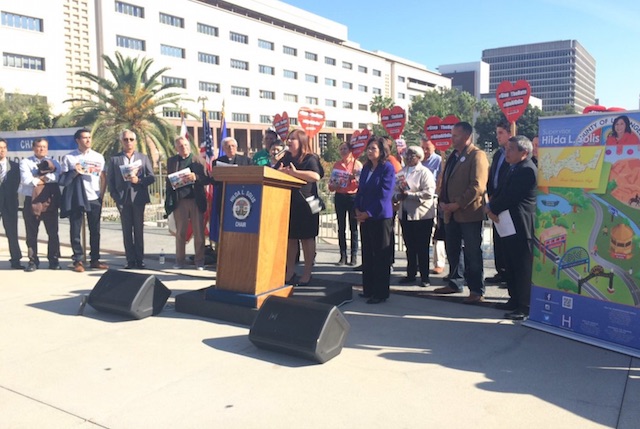 In the wake of President-elect Trump's stunning electoral win, a rash of hate crimes have swept the nation, and Los Angeles has not been exempt from the emboldened wave of bigotry. Sure, we've seen some important questions upgraded from the backpages of The Onion to a CNN graphic near you (spoiler alert: yes, Jews are people!), but there have also been several tangible instances of hate crimes. A particularly disturbing incident involved a Muslim-American high school student in the San Fernando Valley who was told to that she was a "terrorist" and had her headscarf yanked off. The assault continued with the assailant informing her that "you shouldn't be wearing that, you towelhead. You're not American. This isn't what America stands for."

This attack was one of several that prompted the Los Angeles County Supervisor Hilda L. Solis to submit a hate crime motion to the County Board of Supervisors, which was approved Tuesday. Solis's motion, which passed unanimously, will require various county departments to implement a list of recommendations to ensure the safety of its people amidst recent reported hate crimes. More specifically, the motion calls upon the Sheriff’s department and other county law enforcement agencies to implement certain best practices identified by a countywide hate crime task force, and the Los Angeles County Commission on Human Relations (LACCHR) 2015 Hate Crime Report. Recommendations, according to a statement from Solis's office, "include acting swiftly to proactively contact communities likely to be targeted to reassure them of support, providing information on protection, and opening lines of communication to encourage reporting of hate crimes and incidents."

According to the supervisor's office, acts of hate, harassment, and bullying have been reported throughout the county since the election. Per the text of the motion:


Another incident involved an African American man who found a note slipped under his door telling him to “go back to the plantation,” and a physical education teacher at a South Los Angeles middle school who told his Latino students that their parents would be deported, leaving them to be placed in foster care. Other despicable acts have been aimed at female, religious affiliation, and LGBTQ community members.

Hate crimes were already on the rise across L.A. County, as 2015 saw 483 such attacks which translated to a 24% increase, the largest since 2011. As President-elect Trump continues to fill his cabinet with what is fast becoming a Mount Rushmore of hatred, 2016 is looking like a safe bet to get a whole lot worse.

Back in September when the county's 2015 Hate Crime Report was published, we asked Marshall Wong—one of the report's principal authors and a Senior Intergroup Relations Specialist with the County Commission on Human Relations—if he thought the surge in hate was related to the rise of a certain candidate. Marshall told LAist at the time that there was no direct way of measuring the correlation, "but," he said, "it is possible.

"And it would be commonsensical that the more people hear divisive rhetoric in the news on a daily basis, the more socially acceptable it becomes. People who share those kind of sentiments might feel emboldened, and like their intolerance is legitimized, because they hear people in the highest circles of power agreeing with them," he continued.

"It seems that standing up for our people's constitutional rights is going to fall on the hands of state and local governments," Solis said in a statement. "Many families in our county are fearful and we have to assure them that we are here to protect their rights."