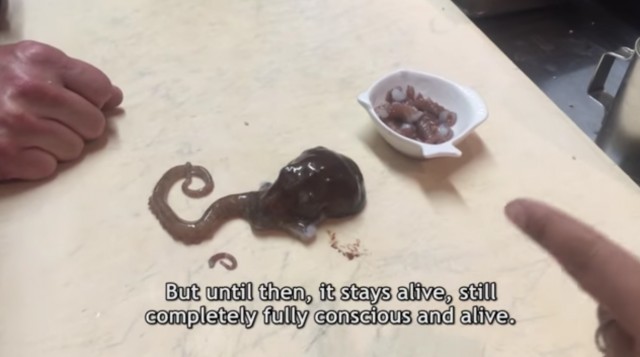 One of PETA's longtime efforts has been to stop the cruel practice of serving live octopus in restaurants. Their latest push comes with a gruesome video (below) that shows not only an octopus having its tentacles painfully cut off one by one, but patrons eating the squirming limbs, along with live lobster and prawn.

Their new video exposé shows the behind-the-scenes preparation at L.A.'s T Equals Fish, where a chef is seen "pinning an octopus down and cutting off one tentacle at a time as the animal flails and struggles."

Each tentacle contains multiple nerves," PETA explains, "exposing the octopus to extreme pain and distress." The tentacles are for a Korean dish called "sannakji," which contains octopus that is "still alive and served immediately, usually lightly seasoned with sesame and sesame oil." Patrons who order this often gleefully film their dishes squirming before they devour them, and in the age of Instagram PETA is now calling this kind of live-food documenting a trend.

The PETA video also shows the kitchen staff explaining that oftentimes the octopus is kept painfully alive for an even longer amount of time—"Because one octopus can fulfill multiple orders of sannakji, this one would be kept alive, out of sight of customers, until all the remaining limbs had been severed, one by one, and served to patrons." After that "the chef would stick his finger into the octopus's mantle and rip out the internal organs, which would cause a slow, painful death."

PETA Senior Vice President of Cruelty Investigations Daphna Nachminovitch explains that "octopuses have sophisticated nervous systems that are rich with pain receptors, so they suffer immensely." The organization is calling for an end to this "disgusting, uncivilized, grossly inhumane, and gruesome practice." In L.A., live slaughter of seafood is currently legal—according to the L.A. Times, "Animals slaughtered for eating are not covered in the Cruelty to Animals statute, and food regulations allow restaurants to keep live seafood."

How smart are octopus? In 2009, one at the Santa Monica Aquarium "disassembled a valve at the top of her tank" in what we can only assume was an attempt to escape to the nearby ocean. At the time, National Geographic pointed out that "octopuses show behavior that suggests curiosity, consciousness, a sense of humor," and self-awareness.

PETA's David Perle has given LAist this list of other L.A.-area restaurants that serve live animals: