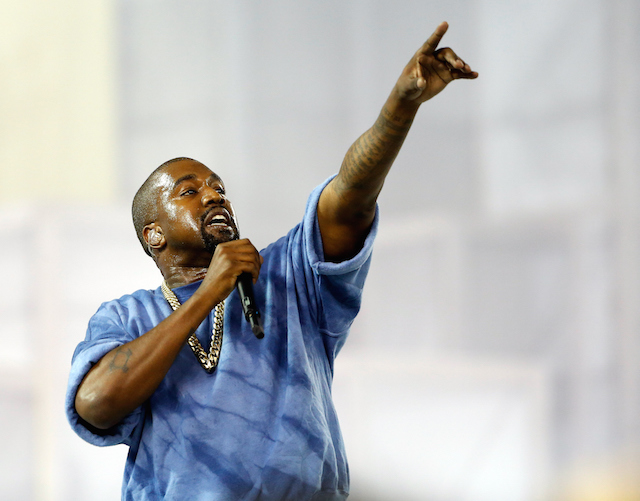 Fans put up with a lot of nonsense from Kanye West, but messing with Queen Bey might be the last straw.

While performing at the Golden 1 Center in Sacramento last night, TMZ reports Kanye called out Beyonce for allegedly only performing at the 2016 Video Music Awards if she was going to win best video — which she did, for “Formation," running against Kanye’s “Famous” video. He then implied that Jay Z wasn’t returning his calls, and threw in Taylor Swift’s name for good measure, whom he famously interrupted at the VMAs for winning an award over Beyonce back in 2009.

Kanye was over an hour late and only performed two full songs before delivering his diatribe and then walking off stage and ending the show, according to CBS. Naturally, some concert-goers, like the Sacramento Kings' Anthony Tolliver, weren’t too pleased.

Here’s a portion of the speech:


So, when I talk about MTV, let me explain something. I was hurt. Beyoncé, I was hurt because I wanted to present a video called “Fade” and I don’t expect MTV to help me. Mr. West, I don’t respect you. I will let you know that Beyoncé is winning the video tonight for “Formation” over “Hotline Bling” and “Famous.” They told me beforehand so I wouldn’t run on stage. Hey, bruh, y’all ain’t gotta fuck with me, but you know I got the vision and you know I’mma gonna keep it real with you. Beyoncé, I was hurt. I went down seven years on behalf of your—eh, n*gga! Don’t [...] no shit while I'm talking. I am putting my career, my life, my public well-standing at risk when I talk to y’all like this. This is a moment in the [...], bro. The vibes is back. The vibes is back. Motherfuckers might feel a way about this tonight. Beyoncé, I was hurt because I heard that you said you wouldn’t perform unless you won Video of the Year over me and over “Hotline Bling.” In my opinion—now, don’t go trying to diss Beyoncé. She is great. Taylor Swift is great. We are all great people. We are all equal.

But sometimes, we be playing the politics too much and forget who we are just to win. Fuck winning. Fuck looking cool. Fuck looking cool. Fuck being cool. Fuck all that, bruh! I’ve been sitting here to give y’all my truth even at the risk of my own life. Even at the risk of my own success, my own career. I’ve been sitting here to give y’all the truth. Jay Z, call me, bruh. You still ain’t calling me. Jay Z, call me. Aye, bruh, I know you got killers. Please don’t send them at my head. Just call me. Talk to me like a man. I’m not trying to be the man. I just am a man, the same as anybody here. I ain’t above, below none of y’all. We all equal. We all equal. This is the vibes, bro. This is the future. This is the way of thinking to make America great again. Ha! You didn’t like that! Guess what? Y’all need the vibes. I was hurt. Feelings matter, bro. The way motherfuckers put money up so high, popularity, radio spins. Feelings matter, bro. Feelings matter, bro.

He then goes on to bring Hillary Clinton and Mark Zuckerberg into the whole freely associative rant—you can read the entire thing at Fader. This comes just a couple of days after he declared that he would have voted for Donald Trump for president... if he had voted.

Kanye plays the Forum tonight in Inglewood. So if you have tickets or are planning to go, it might not be a late night.

Here’s video of the show below. The Beyonce comments start about eight-and-a-half minutes in.

Related:
Yeezy For President: Big 'Kanye 2020' Banner Is Hanging Off This Building
Kanye West Kicks Off L.A. Leg Of 'Saint Pablo' Tour With A Dose Of Humility
Kanye's 'PABLO' Pop-Up Shop Will Drop In L.A. This Weekend