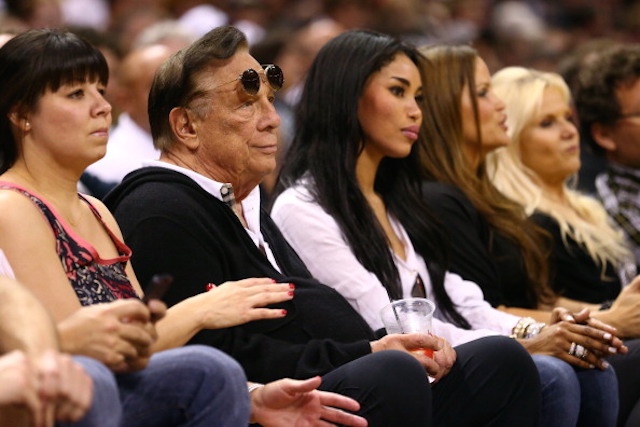 Team owner Donald Sterling of the Los Angeles Clippers and V. Stiviano at the 2013 NBA Playoffs at AT&T Center on May 19, 2013 in San Antonio, Texas. (Photo by Ronald Martinez/Getty Images)

Former Los Angeles Clippers owner Donald Sterling has agreed to settle his lawsuit with the NBA over the 2014 sale of the team to former Microsoft CEO Steve Ballmer.

According to the L.A Times, Sterling filed the lawsuit in 2014 alleging that the NBA, NBA Commissioner Adam Silver, and others (including Sterling's estranged wife Shelley Sterling) had conspired to remove Sterling as the team’s owner. According to ESPN, Sterling filed an initial $600 million antitrust lawsuit in 2014, which was dismissed by a judge in March 2016. Despite U.S. District Judge Fernando M. Olguin's stated skepticism that "Sterling suffered any injury at all, let alone an antitrust injury," Sterling appealed the dismissal.

No details of the settlement have been made available.

Sterling “is happy with the outcome of the settlement," Sterling’s attorney Bobby Samini told LAist. Samini noted that the voluntary dismissal of the suit was filed on Friday, and at all related lawsuits were dismissed as well.

“Finally, in the third season of Steve Ballmer's ownership of the Clippers, the last piece of litigation is mercifully over,” Pierce O’Donnell, an attorney representing Shelley Sterling, wrote in a statement to the Times. “Donald's quixotic legal challenge to the record-shattering $2 billion sale was doomed from the very outset. Now all of us fans—Shelly Sterling being the No. 1 fan—can focus on cheering the Clippers to their first NBA championship."

We reached out to the NBA for comment but didn't immediately hear back.

Sterling was banned for life from the league after an audio recording of him making racist comments surfaced in 2014.

In other news, the Clippers will play the Kings tonight in Sacramento.

Oren Peleg is a writer in Los Angeles. He also contributes to The Jewish Journal, Render Media, and Eater LA.