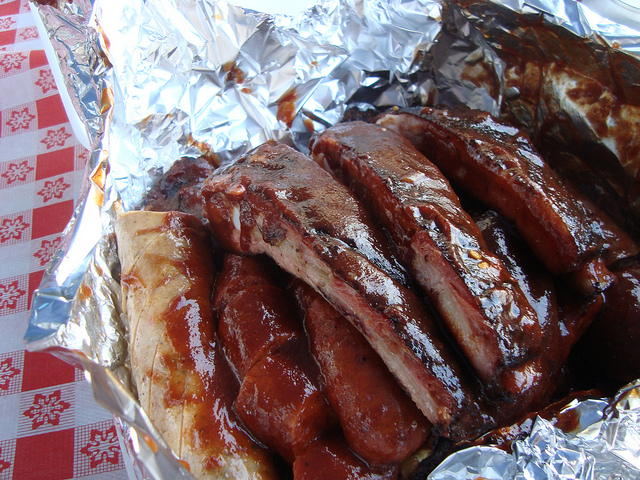 Ribs at Bludso's. (Photo by Misty O via the LAist Featured Photos pool on Flickr)

Where can you get the best barbecue in L.A.? Certainly, it's a divisive question. But you'll find plenty of Angelenos who'll point the way to Bludso's in Compton. Also worth mentioning: the restaurant has made it onto Jonathan Gold's "101" list again this year, with the Goldster proclaiming that, "the best barbecue in town still comes out of the battered steel pits down at the original Bludso's in Compton."

Unfortunately, that location is now officially shuttered, reports the L.A. Times. What started out as a temporary hiatus (owner Kevin Bludso said that the store was undergoing renovations) has turned into a permanent closure, as Bludso couldn't come to an agreement with the building's owner.

There's a silver lining however: Bludso says that he's working with Aja Brown, the Mayor of Compton, to find him a new location in the neighborhood. He told the Times that, in the meanwhile, he'll be doing pop-ups and catering work, and adds that "Compton is a priority; the city deserves something even nicer than what we had before." He says he hopes to have a new Compton location up and running by the end of 2017. If you're jonesing for some of their brisket or pulled pork, you can still get it catered, or you can hit up their Hollywood location on La Brea. It's a formidable alternative, but, still, there's no replacing an original. Interestingly, they also have a location in Melbourne, Australia. So, time to cash in on those flyer miles.

In a 2015 interview with TMBBQ, "a multiplatform community of people all over the world who love barbecue," Bludso said that he'd formerly worked as a DJ and a corrections officer before he got serious about opening his own BBQ joint. He also defended the Golden State's BBQ, saying, "California gets a bad rap for barbecue, but back in the '70s and '80s you had all kind of black barbecue establishments in L.A. Those guys were from everywhere—Mississippi, Memphis, Texas—so California had more different types of barbecue stands back in those days than any other state."

When asked about his Hollywood location, which the interviewer described as "the whitest barbecue joints in all of L.A.," Bludso said that "it's upscale barbecue," adding, "It's cool. You've got to do business with the right people. Everyone's got their own taste in barbecue, and that's fine. Just don't do bad barbecue."