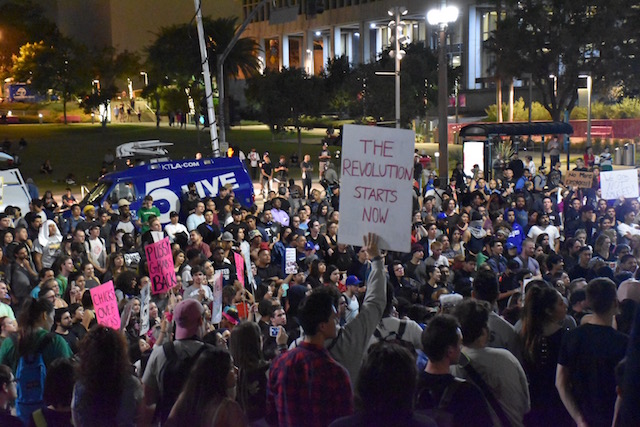 Angelenos have been protesting Donald Trump's election since Tuesday night, with thousands taking to downtown and City Hall, and various high schools experiencing walkouts from their students. This Saturday's demonstration at MacArthur Park, however, may be the largest yet.

The event is organized by Union del Barrio Los Angeles, the L.A. chapter of the Latin-American political group that also has hubs out in San Diego, Oxnard, and the Bay Area. According to the event's Facebook page, the demonstration will start at 10 a.m. in MacArthur Park, where participants will meet and go on a march that will end by the Edward Roybal Federal Building downtown.

According to Ron Gochez, an organizer with Union del Barrio, planners expect about 10,000 people to show up. "You look at the previous protests, and you see that several thousands of people showed up, even though that wasn't entirely organized," said Gochez. "It was a spontaneous thing and thousands still showed up."

Several activist groups have announced their intentions to join the event. So far, they include the International Action Center, different MEChA groups from various campuses (including UCLA), union group SEIU Local 721, SWANA-LA, and Black Matters (not to be confused with Black Lives Matters), among other groups. One of the main components of the event will be what Gochez calls an "organization fair," where organizations will set up tables and engage with people who are looking to get involved. "One of the objectives is to organize," said Gochez. "We're saying that, if you're really concerned, you have to be a participant in some active way. If you show up and don't belong to an organization, hopefully you'll join something [at the event]."

One of the pressing concerns, of course, will be safety. Members of the National Lawyers Guild will be on hand to let demonstrators know their rights, especially in regards to police activity. Gochez says that organizers are aiming for a peaceful protest. "We're not trying to do something illegal. We're not trying to vandalize. What we're doing is sending a clear message that we won't allow fear and hate to stop us," said Gochez. He adds that, however, he can only speak for Union del Barrio. "We're not going to denounce other people, because that rage is coming from somewhere," said Gochez. "Our intention isn't to vandalize tomorrow. But we can't control what everyone does." He notes that Union del Barrio had helped organize a 100,000 person march in May of 2010 (to rally for immigration rights), and that it had happened peacefully.

"A lot of people are feeling very fearful and down. But this is not the time to hide," said Gochez. "Our communities will denounce the policies that President elect Trump says he'll implement."

The event will start at 10 a.m. on Saturday at MacArthur Park. For more information you can visit the event's Facebook page.