A Liquor Store With A Secret Deli Opens In Highland Park

Tinfoil Liquor and Grocery will open up this coming Monday (November 14th) in Highland Park, adjacent to Mr. Holmes Bakehouse. On the surface, it's a place to stop to pick up alcohol and sundries. But behind an unremarkable employees only door, there've tucked a small deli that serves up sandwiches and sides.

Tinfoil comes by way of Jeremy Fall, whose other projects include Nighthawk Breakfast Bar and Easy's Burgers (which is moving from Chinatown to Mid-City, according to Eater).

The Tinfoil space has long been a liquor store, though in its new iteration, patrons may notice some changes. Walls have been removed to expose original brick, for instance, and a fresh mix of snacks and soft drinks have been added to the shelves. They also sell both craft beers and your time-honored domestics, as well as top and bottom-shelf spirits. The neon sign out front that reads 'coldest beer in town' remains.

In a move that some might find cheesy, but fitting for a shop that just opened up next to a bakery that sells cruffins, you can get a hearty sandwich if you're willing to play along with the gimmick. Ask the clerk if they sell birthday candles, and they'll buzz you through the 'employees only' door. (Notably, Batman fans may be interested in the vintage Julie Newmar poster on the door.) What was once a storage closet has been transformed into a deli where you can score a filling lunch or meat, including porchetta and house-cured bacon, by the pound.

The sandwiches come in a variety of flavors—roast beef, ham with brie butter, roasted eggplant— but also sizes. For instance, you can get a "full loaf" for $25, which sounds like a lot, but it's 24" long, serving six people.

And if you do choose to ask about those birthday candles, make sure to look around. The floor has been covered in thousands of nickels, and it's a pretty cool effect. 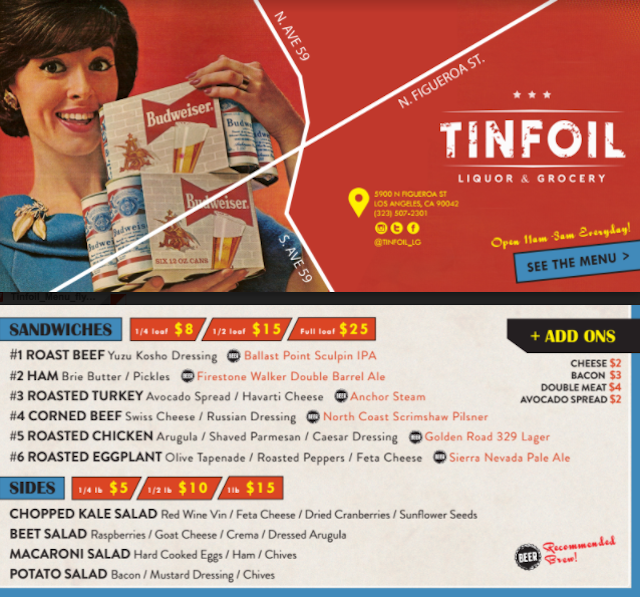