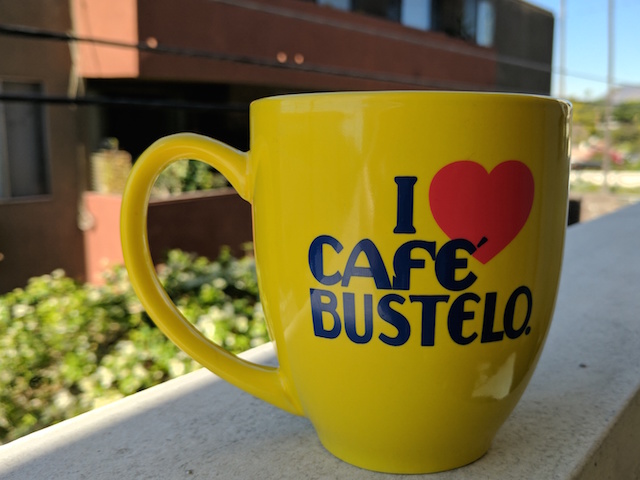 Celebrate the end of this treacherous election cycle with free coffee when the Cafe Bustelo pop-up returns on Thursday.

From November 10 to 14, you can score free coffee and espresso from 8 a.m. to 7 p.m. daily at Sabor y Cultura in Hollywood. It sounds like the perfect pitstop, as there will also be free wifi, phone charging stations, a photo booth, plenty of seating, art and the occasional live performance or demonstration. Sabor y Cultura will close on November 8 and 9 for redecorating, and then again on November 15 and 16 to return to its usual appearance after the pop-up has ended. Available complimentary coffee drinks include iced or hot coffee, cortadito, cafecito or cafe con leche.

The Cuban-style coffee brand was founded in 1928 by Gregario Bustelo. Bustelo, originally from Spain, worked at a coffee roaster in Cuba where he fell in love with a Cuban woman. The pair married and moved to Puerto Rico, where Bustelo continued to work in the coffee industry. When the U.S. began allowing Puerto Ricans U.S. citizenship, the couple moved to New York City, bought a coffee roaster and began selling their own coffee out of their home and to local restaurants. It became quite popular, and the brand was acquired in 2000 by Rowland, a Miami-based coffee roaster founded by a Cuban immigrant in 1961.

Popular in NYC bodegas, you may recognize the can from a recent TV show set in Harlem. In Luke Cage, the title character says more than once that he doesn't drink coffee. But you will see the bright yellow Bustelo tin many times in the form of Pop's swear jar. It's wrapped in tape, but it's still highly recognizable as a good ol' Bustelo can.

Got some heroes at #Netflix fixing things. They're all over it. Meantime, keep this in mind. #LukeCage pic.twitter.com/eUPkE8dH5H

Sabor y Cultura is located at 5625 Hollywood Blvd. in Hollywood.