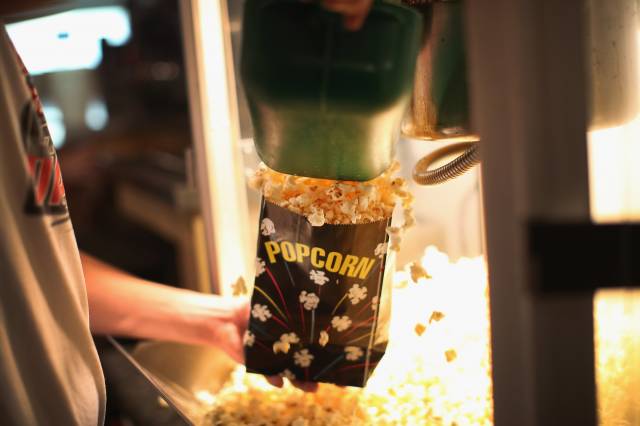 At the turn of the 20th century, popcorn in a movie theater was unheard of. By the 1930s, the snack was introduced as a business move to survive the Great Depression. And by the mid-1940s, there was no turning back—popcorns and movie theaters were committed to a long-term relationship, like it* or not**.

Popcorn and movie theaters are an unlikely match—the crunching of the popped corn and the rustling of the bag in a hopefully otherwise silent theater is enough to drive a person mad. But the two are tied together forever, despite opposition from theater owners early on.

On top of not wanting a constant distraction during movie screenings, the theater owners were also concerned about cleanliness. According to Andrew Smith, author of Popped Culture: A Social History of Popcorn, "Movie theaters wanted nothing to do with popcorn because they were trying to duplicate what was done in real theaters. They had beautiful carpets and rugs and didn't want popcorn being ground into it." Even if theaters wouldn't offer popcorn, the popcorn came to them. 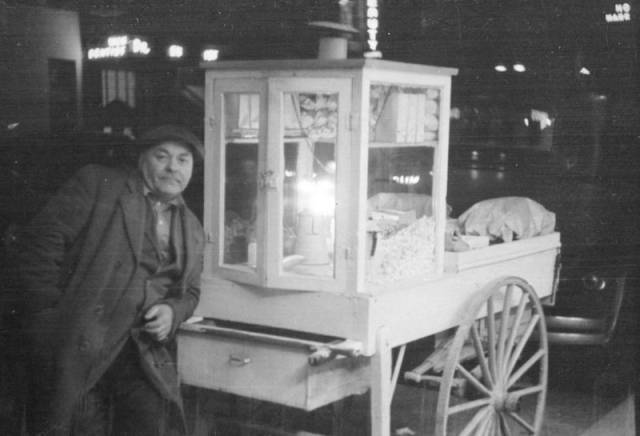 At first, popcorn was being sold to movie patrons outside of theaters from street carts. Some theaters still fought the snack by making people check their outside popcorn with their coats, but eventually it became a common offering from the theater itself. Thanks Great Depression.

According to the Smithsonian:

The Great Depression presented an excellent opportunity for both movies and popcorn. Looking for a cheap diversion, audiences flocked to the movies. And at 5 to 10 cents a bag, popcorn was a luxury that most people were able to afford. Popcorn kernels themselves were a cheap investment for purveyors, and a $10 bag could last for years. If those inside the theaters couldn't see the financial lure of popcorn, enterprising street vendors didn't miss a beat: they bought their own popping machines and sold popcorn outside the theaters to moviegoers before they entered the theater... As more and more customers came to the theater with popcorn in hand, owners couldn't ignore the financial appeal of selling the snack. So they leased "lobby privileges" to vendors, allowing them to sell their popcorn in the lobby of their theater (or more likely on a bit of street in front of the theater) for a daily fee.

The next natural move for those in the movie theater business was to cut out the middlemen, and eventually popcorn operations were an inside job. During that era, theaters that embraced snacks typically survived, while others went under, Smith says.

One of the first vendors to make it in the door was Julia Braden of Kansas City, Missouri—according to the New York Times (also via Smith), "She persuaded the Linwood Theater to let her set up a stand in the lobby and eventually built a popcorn empire. By 1931, she owned stands in or near four movie theaters and pulled in more than $14,400 a year... Her business grew even in the midst of the Depression, at the same time that thousands of elegant theaters went bust."

By the 1940s, there was no separating a movie theater from its buttery gold, which eventually held a starring role in the movie concession ads of the 1960s, popular at drive-in theaters.

But what about the butter? First of all, movie theaters "preferred yellow corn, which expanded more when it popped and had a yellowish tint that gave the impression of a coating of butter." According to PBS, one of the first times butter itself was introduced to popcorn was way back in in 1893 at the World’s Columbian Expo in Chicago, where "inventor Charles Cretors introduced the world’s first mobile popcorn machine—a simple steam engine attached to a peanut cart that cooked popcorn in a mixture of butter and lard." (That's one-third clarified butter, two-thirds lard, and salt... if you want to try at home.)

Today, the secret recipe for the butter topping includes hydrogenated soybean oil, artificial flavoring, beta carotene for color, and preservatives. More than likely it comes from a plastic tub, and you probably shouldn't consume too much of it. 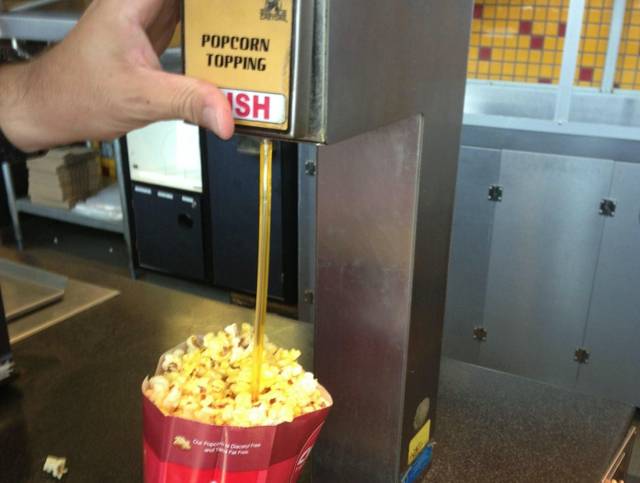 Yeah, that's the stuff. (via Imgur)

Allegedly one Depression-era entrepreneur once declared, "Find a good place to sell popcorn, and build a movie theater around it." Popcorn saved the theaters back then, and today it's still a money-maker. While each bag of popcorn has an average price of around $8 to $15 for consumers, it probably only costs the theater around .80-cents per bag to make.