Op-Ed: Why Santa Monica Should Vote NO On Measure LV 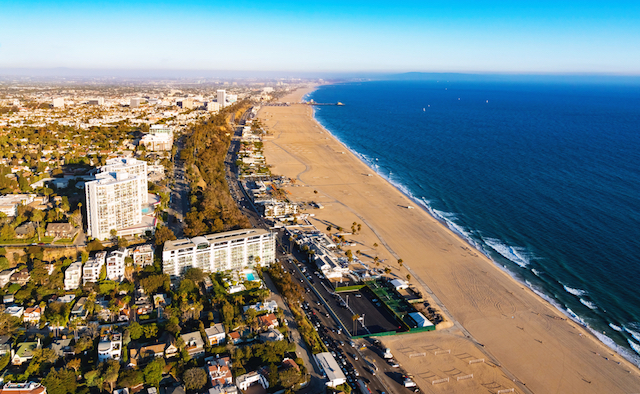 Aerial view of the beach in Santa Monica. (Shutterstock)

If it sounds too good to be true, it probably is. That saying has never been more applicable than in this November's election when Santa Monicans will vote on Measure LV.

Measure LV, which is opposed by a historically broad coalition that includes the League of Women Voters of Santa Monica, Santa Monica police and fire fighters, and the Sierra Club, would require a public vote on nearly all buildings taller than two stories, about 32 to 36 feet.

Currently, the vast majority of the city has a 32-to-36-foot height limit, with some places in downtown Santa Monica and along commercial boulevards allowing three-to-four stories and up to 84 feet. For buildings taller than 32-to-36 feet, the Planning Commission and/or the City Council have to approve them and they must undergo a lengthy community input process before they can go forward with construction.

The authors of LV argue that by imposing a voter approval requirement for anything over the 32-to-36-foot limit, they will keep traffic from getting worse. They also argue that this would help save rent controlled buildings and even keep rents lower. These points have both been refuted by traffic experts and renters' rights champions, respectively. They argue that LV would actually make traffic worse, without any mechanism to take cars off the road, and that it would be virtually impossible to build new apartments in town, putting even more pressure on existing neighborhoods and drive rents and eviction rates up.

Proponents of the measure also argue that LV is about empowering residents to have a say in the development process. However, the League of Women Voters of Santa Monica noted that by subjecting pretty much every new project to lengthy and expensive political campaigns, it opens a Pandora's box, inviting special interests to try to sway all of these elections, effectively silencing the voices of your everyday residents.

But, in reality, LV is about more than just new development. The way the measure is written, it would also apply to existing buildings taller than the two-story threshold, which means that rebuilding after an earthquake would mean waiting for a city-wide election to rebuild all the buildings that were taller than the two-story limit set by Measure LV. This reading of the initiative was confirmed by the city's own analysis and an independent legal expert.

The authors of the measure also failed to exempt hospitals, fire stations, schools, or nonprofits. There is a token exemption for projects that are 100% affordable housing, but the measure fails to provide any way to fund these projects, so the exemption is about as useful as an exemption for unicorn stables. Just because you put it down on paper doesn't mean you're going to get it.

The measure deliberately makes it impossible to address the regional housing crisis. The measure's co-author said at a May 10 council meeting, "We don't need additional housing." As demand for places to live near jobs continues to increase, making it impossible to add new homes in convenient locations will only continue to cause rents to skyrocket.

Residocracy has been the most extreme anti-development voice in the city since 2014, when they led a successful petition drive to overturn City Council approval of a project that would have replaced the outmoded Papermate factory at 26th and Olympic with a mixed-use housing and commercial project. The so-called Hines project was stopped and instead of getting a mixed-use project there, the factory is being reoccupied as a 100 percent commercial project.

In 2015, Residocracy successful lobbied the City Council to lower height limits along commercial boulevards, eliminating the possibility of four-to-five-story buildings being built along those corridors.

The fight over Measure LV has become a proxy war for other anti-development advocates in the region. The backers of the so-called Neighborhood Integrity Initiative (NII) [ED: also known to LAist readers as That Terrible Nimby Ballot Measure] have thrown money into Residocracy's war chest to help pass LV. The NII will be on the ballot in Los Angeles this March. An anti-development win in Santa Monica could create positive momentum for the NII.

The Los Angeles Times said Measure LV would only make the housing crunch on the Westside worse. The Sierra Club says LV could actually make traffic worse. And long-time renters' rights advocates in the city oppose LV because it will cause more displacement by encouraging the redevelopment of existing apartments into luxury condos.

The truth is that there we face real problems on the Westside like traffic, crushingly expensive rents, and increased gentrification. Measure LV does nothing to solve any of them and would likely make these problems worse.