Clifton Cafeteria's newest bar is about to open to the public, and it is magnificent. Pacific Seas, located above the historic restaurant's Gothic and Monarch bars, is a tiki bar. But like every inch of Clifton's, it is covered in enchanting artifacts with plenty of secret surprises for the curious.

The bar is accessed via a stairwell that takes you into what they're calling the Art Deco Map Room, where the map in question comes in the form of a mural from artist Sammy Beam. Wind through a short hallway and you'll be transported into the Polynesian glory that is Pacific Seas. The space is dominated by a massive boat that just so happens to be docked askew on the polished wood floors. You could slide up to one of a dozen or so seats at the bar for a post-work Singapore Sling, where a nearby cage boasts a number of curiosities. Or you could find a seat in one of the more intimate and secluded areas, each of which contains curios and shelves with plenty of treasures meant to evoke the Golden Age of Travel. Some of these items are from the original iteration of the restaurant, while others are brand new scores. In one corner is a small stage, which will allow for live music and other performances. The thatch work, which can be found in numerous places throughout the bar, comes via Bamboo Ben Bassham, a professional tiki bar designer, who lives in Huntington Beach.

The menu at Pacific Seas, though not released yet, will be totally different from the comfort food offerings of the cafeteria below. You can expect lots of seafood, like crab cakes, stuffed lobster and whole fried red snapper. The cocktails will, of course, pay homage to tiki classics like Mai Tais and Daiquiris. They'll also be serving up something call the Scorpion Bowl, which contains a tropical elixir toped with cinnamon that bartenders will first light on fire.

The windows of the space have been covered with dark tapestries, shutting out all natural light and fully immersing one in the Pacific Seas milieu. We imagine it's easy to lose track of time here, which is good, because you're going to need a lot of it if you want to explore every nook and cranny. 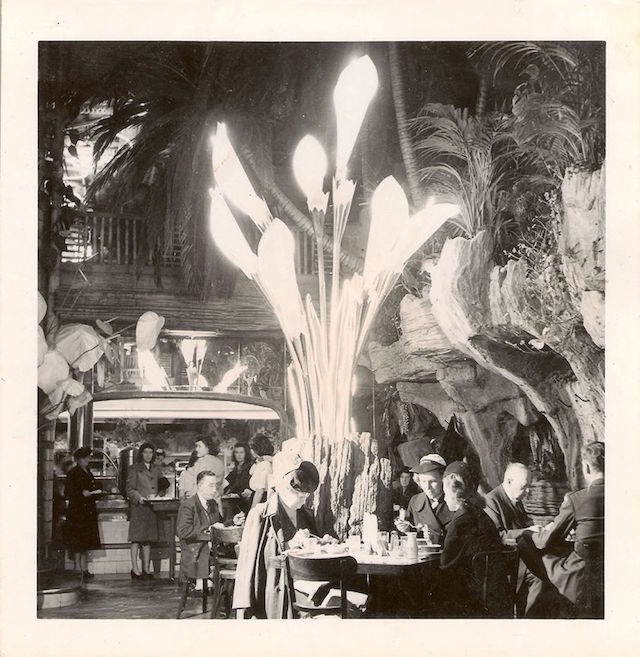 It is believed that Jack Kerouac must have been talking about this particular Clifton's outpost in On the Road:


Terry and I ate in a cafeteria downtown which was decorated to look like a grotto, with metal tits spurting everywhere and great impersonal stone buttockses belonging to deities and soapy Neptune. People ate lugubrious meals around the waterfalls, their faces green with marine sorrow."

Pacific Seas officially opens to the public on Friday, November 4. You're probably going to want to make a reservation!