The techno-paranoia show Black Mirror is back for a third season (like it or not), and the first of the six episodes ("Nosedive") is one of the most beautiful and terrifying of them all. It stars Bryce Dallas Howard as Lacie Pound, an everywoman of the not-so-distant-future, where you are rated (1-5 stars) by everyone you encounter in life. Just like Uber. ⭐️⭐️⭐️⭐️⭐️

Pound, along with practically everyone and everything in the town, is draped in pastel hues. The inviting color scheme pairs perfectly with the dark undertones of a life where everything is anchored to your social media presence, and a wrong look or less-than-bubbly air can make you practically obsolete.

How did the color palette come to be? We asked Sinead O'Sullivan, one of the costume designers for the episode. (Click through for the looks, but be warned there are mild spoilers.) 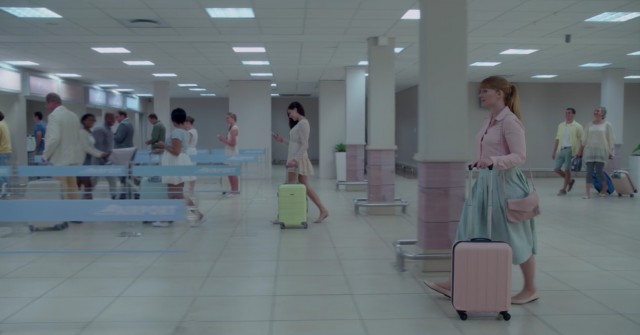 Were the clothes custom made for this episode? Most of Lacie's costumes were made bespoke, [as were] some of the other principal items, such as Paul's groomsman frockcoat.

Can you divulge where the others were from? The rest were sourced from a variety of places across London and Cape Town, where we filmed. Naomi's wedding dress was borrowed from designer Elbeth Gillis in Cape Town.

Did you have to follow a color guide? Yes, the whole film had a pastel color theme, with limited pattern!

Who decided on the color schemes for the episode (clothing and otherwise), and what do they mean, if anything? [Director] Joe [Wright] wanted to create a dystopia that is pristine, picture perfect, and thought the overall pastel and preppy color scheme would reflect the character's aspirations to appear chirpy and happy at all types.

The man at the end, and also some other people in the episode, are wearing dark colors. Why is that? We tried to avoid black as much as possible—even the security guards are wearing greys or blues, but here and there, there are characters who don't fall in line with the status quo. So Ryan wears a darker blue shirt at one point and he wears a lot of grey, because he's not trying to fit in. Similarly in the queue for the car rental place, and at the electro station, some of the other people next to Lacie in the "non priority" queue, are not wearing pastels. The character at the end is wearing a dark green suit, and again he's someone who breaks the rules and doesn't care what people think.

Do you have a favorite outfit in the episode? The aerhostess, Michaela Coel, in her mint uniform and bow tie blouse was a particular favorite.