Culver City To Sue FAA Over Change In Flight Paths 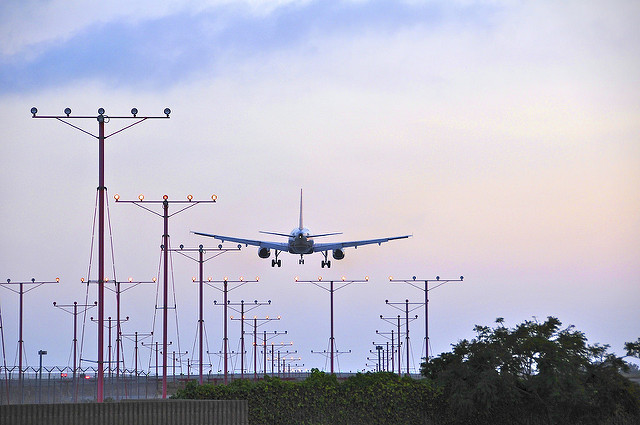 (Photo by Maria via the LAist Featured Photos pool on Flickr)

The FAA wants to implement a new, nationwide navigational system that guides airplanes to their destinations. Titled "NextGen," this satellite-based program is regarded as a major upgrade from the current setup of land-based systems. Citing the existing, decades-old technology, and the need for more efficient flight paths (e.g. less fuel consumption), the FAA is heralding NextGen as a new age of navigation.

Some cities in the Southland, however, are wary of the new flight paths that will come with SoCal Metroplex (which is what the FAA is calling NextGen's implementation in Southern California). In Culver City's case, officials plan to file a lawsuit against the FAA's new flight procedures on Thursday.

Why the strong response? For one thing, the new flight paths may go over areas that, in the past, had never experienced much airplane noise. The other factor is that the new satellite system is expected to be extremely precise, giving pilots an exact course as they arrive at or depart from an airport. This means that the system will virtually create lanes where many planes will fly through. Whereas plane traffic had been (relatively) diffuse before, some theorize that it will now be concentrated into a narrower space. And what if you happen to live under that space? This is what Culver City residents have been asking.

While airplane noise is not new to Culver City (LAX is just right there, after all), Jim Clarke, mayor of Culver City, says that there has been a spike in complaints in the past few years. "The anecdotal evidence over the past few years suggests that there's been a big rise in the noise," Clarke told LAist. According to Culver City for Quiet Skies, a coalition formed by locals, some residents believe that planes en route to LAX have been flying at lower altitudes since 2012, leading to more noise. Clarke says that the FAA told city officials that there hasn't been a shift in flight procedures in past years, but Clarke believes that something had changed to lead to the (perceived) higher concentration of planes flying over the same route.

Whatever the cause, residents and city officials believe that the NextGen system will only exacerbate the problem. "Let's assume that, for every five planes that fly the same flight path, maybe two of them will fly the exact path. But now, instead of two out of every five, you get maybe four out of every five," said Clarke.

The FAA, on the other hand, says that the new flight paths shouldn't create an appreciable difference for residents on the ground. In an environmental report presented in August, the agency said that, "there would be no changes in aircraft noise exposure that would exceed the FAA's significance threshold for noise impacts on people. Likewise, there are no conflicts with federal, regional, state, local land use plans, policies and controls." The agency did projections for how NextGen would perform in 2016 and 2021, and both results say that the resulting noise levels will not exceed restrictions.

This environmental assessment will be the main focus of Culver City's lawsuit. Clarke says that the report, when touching on the topic of noise, used an assessment model that is more commonly associated with East Coast flight programs. The report uses the Day-Night Sound Level (DNL) model, while California usually relies on the Community Noise Equivalent Level (CNEL). According to Clarke's office, during the evening hours, the DNL threshold is five decibels louder than what would be allowed by the CNEL. Clarke also claims that the report is "woefully lacking" in its assessment of the impact it would have on greenhouse gases.

Other cities have voiced their reservations about the FAA's report. Nelson Hernandez, a senior advisor to Santa Monica's city manager, told KPCC in September that the FAA has yet to quell her concerns about the new flight paths. "Our concerns remain and we object to the FAA moving forward with a plan that will negatively impact thousands of residents on the Westside," said Hernandez.

Ian Gregor, a spokesperson for the FAA's Pacific Division, wrote to LAist to say that, "We stand by our environmental analysis."

While some residents are wary of the NextGen system, the FAA expects that it could be a big boon for commuters. According to the L.A. Times, the system is expected to result in shorter flights, reduced taxiing times, and less delays on the tarmac or terminal gates. Also, the system could allow air controllers to space takeoffs (and landings) closer together, which means that airports will be able to handle more traffic.

The SoCal Metroplex project affects 21 airports in the Southland, including LAX and John Wayne Airport. It's one of 14 similar projects across the nation. The FAA says that it will be phasing in NextGen starting this November, and that it will be doing outreach in April 2017 to get feedback from the public.