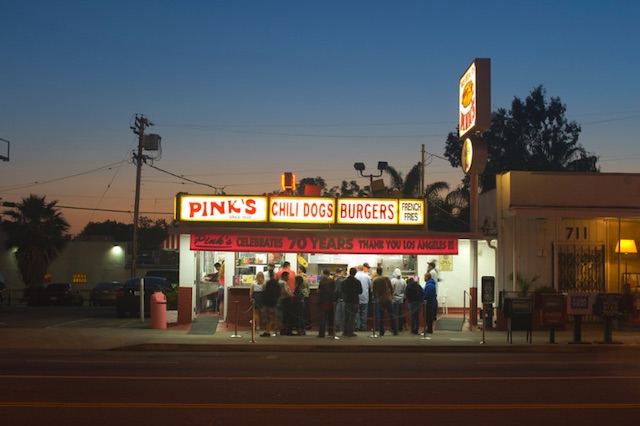 (Photo by myles via the LAist Featured Photos pool on Flickr)

Well, the Dodgers lost, which means that Clayton Kershaw's post-season demons will continue to hound him for another season. What it also means is that, by extension, Wiener's Circle now have a lot of reason to gloat.

A quick recap. During the National League Championship Series, Chicago's Wiener Circle (which is known for their gruff manners) threw some Twitter shade at Pink's to hype up the budding L.A./Chicago rivalry. This resulted in a bet in which, if the Dodgers lost, Pink's would have to pay for 108 hot dogs that will be given away for free at Wiener's Circle. They will also donate to a charity of Wiener's Circle's choosing. Of course, the stakes would be flipped if the Cubs won.

Well, we all know what happened. And, on Tuesday, 108 patrons at Wiener's Circle were treated to a free Chicago-style hot dog, all thanks to Pink's.

Still have some more 🌭🌭 to give out. Come get them Chicago, @pinkshotdogs is paying! https://t.co/koMzgUI5St

Let us touch upon a couple things that are bugging us. It's totally Wiener Circle's M.O. to make this harder than it has to be. Initially, what they'd said was that the FIRST 108 customers would get a free dog:

FREE HOT DOGS for first 108 customers on Tuesday, and the best part is it's on @pinkshotdogs!! Thank you!! #gocubsgo #FlyTheW #worldseries https://t.co/Og1gRw9CLK

But now they're turned around to say that patrons have to mention the bet to get the free hot dog. Kind of inconsistent, ain't it? Not everyone is in-the-know about the bet. This is perhaps why, even at about 3 p.m. Chicago time, they still had some free dogs lying around:

We do. Come get it @chitownconnections. And how about a song while you're at it too https://t.co/Vl1xmu30Kn

Also, when the Cubs clinched their spot in the World Series, Pink's was pretty courteous about it and gave a shout-out to the long-suffering team:

Wiener's Circle, though, really wanted to drive home the point:

OH, and let's not forget the $1,908 you will be giving to @CubsJoeMadd charity!!! @pinkshotdogs you are a good sport but #betterlucknextyear https://t.co/Al8s3qxVqp

What are they dodging? Winning?

It's no big deal to Pink's, however. They even seemed to embrace the whole thing.

Anyway, such is the game of life (and baseball). Personally we're a little torn over here about the World Series. A part of us wants to see the Cubs top the Cleveland Indians and end their historic championship drought. Though, at the same time, we'd like to see a Cleveland hot dog stand take up a bet with Weiner's Circle (and win). Perhaps Cleveland's Happy Dog will take up the challenge?

Also, a parting note. You may be wondering about those seemingly-arbitrary figures that Pink's is shelling out. The numbers aren't so meaningless, actually. The 108 hot dogs are a nod to the 108 years that have passed since the Cubs last won the World Series. And the $1,908 dollars they'll be donating to manager Joe Maddon's charity is a reference to the last year they won it all: 1908.