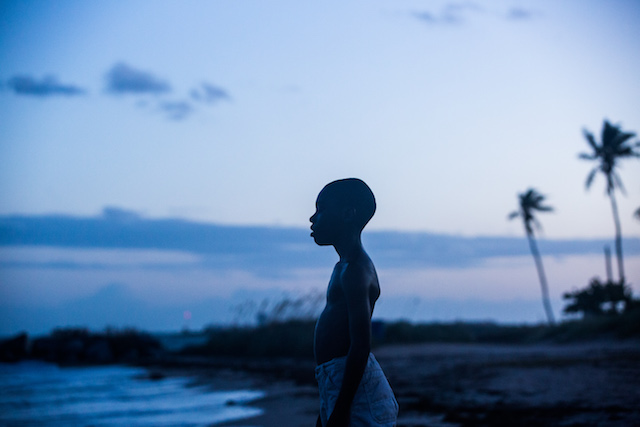 Alex Hibbert as Chiron in 'Moonlight' (Photo by David Bornfriend, courtesy of A24)

The setting is a breakfast table in a quiet, modest middle-class home. The characters sitting at it, however, know not to take such amenities for granted. On one side is Chiron, a 10-year-old black boy, bald headed with vibrant skin, still and silent with a stare that could kill. Opposite him is Juan—early 30s, diamond stud, a little more loose in his character, but not at this moment. "Am I a faggot?" Chiron asks his pseudo-mentor, who has taken the boy under his wing out of both pity and his own desire to do something good for once.

There is no music to turn this tension into an easy lesson-learning moment. The walls are so bright from the sun blaring through the glass windows that the blackness of their skin, inextricable from their lives and the culture of Miami that surrounds them, cannot be ignored. Juan tells him what it means to be gay—curtly but without condescension. The silence can be felt as they speak; they take in the words spoken to them before speaking another line. But another question finally breaks the simmering tension: "You sell drugs to my mom?"

Describing this scene from Barry Jenkins's Moonlight cannot exactly do justice to one of the most patient and bravura scenes in recent American cinema. Those who judge movies by their virtuoso camerawork and complex plotting miss out on how a simple scene can floor us with its intimacy. Jenkins often does just that: two people sitting, talking, and articulating an emotion over a particular rhythmic effect. 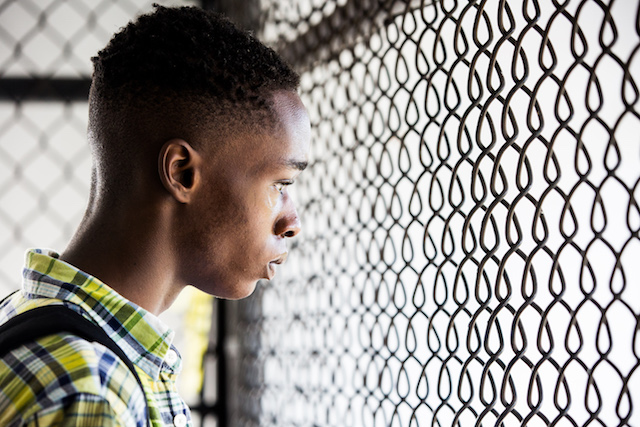 Ashton Sanders as a teenaged Chiron in 'Moonlight' (Photo by David Bornfriend, courtesy of A24)

Making only his second feature since 2008's Medicine for Melancholy, Jenkins captures experience in lieu of narrative. Contrary to the title, most of the film doesn't take place in the dark—it's mostly set in the hazy sunlight of Miami. The wind on the ocean and the crickets in the grass provide the musical accompaniment until a low-riding Impala roars its engine and the stereos carry the sounds of Miami bass pulsating through the air. This is Chiron's story, divided into three acts (childhood, teen, and young adult) as he emerges as a queer male in a society not particularly prone to accepting such identities. For a tale attuned to the black community, many of the film's signifying elements speak to a certain tendency to depict black life—a world of vials, guns, and abandoned homes.

Yet Jenkins understands that good melodrama is built on certain expectations, using cliché to get to heart of a unique story otherwise absent from screens. Conversations follow on a sun-lit soccer field, a deserted beach, and a midnight Cuban deli, where Chiron and his friendship with another boy, Kevin, grows in unexpected ways, though only with tenuous assurance. There's a playful dance between the actors and the camera. When they move, it resembles the pulsating agility of the Dardenne brothers; when they sit, it's contemplative like Ozu. More than anything else, the camera seems attuned to give them their privacy while sharing in their intimacy—the most memorable shot during the film's only sexually explicit scene is a hand grasping the silver-shining sand. The three performers who embody Chiron (in age order: Alex Hibbert, Ashton Sanders, Trevante Rhodes) each bring a slightly different interpretation, but most powerfully keep that everlasting stare—one that displays desire, fear, love, and anger all often at once.

It is elsewhere that Jenkins seems to lose his fitting, often cutting such sequences together with interludes of art film flourishes. Slow motion, emphatic roving camera long takes, and classical music overload the landscape. For a film that seems utterly unconcerned with anything beyond the small stakes of its narrative, these sequences feel to speak to an entirely different film. Because of the elliptical narrative, Jenkins uses sequences like this to bridge certain gaps in narrative logic. But attempts at this fall prey to easy stylistic tropes. Jenkins shows an amazing nuance of trust in his actors—why cannot he extend the same belief in his own directing? 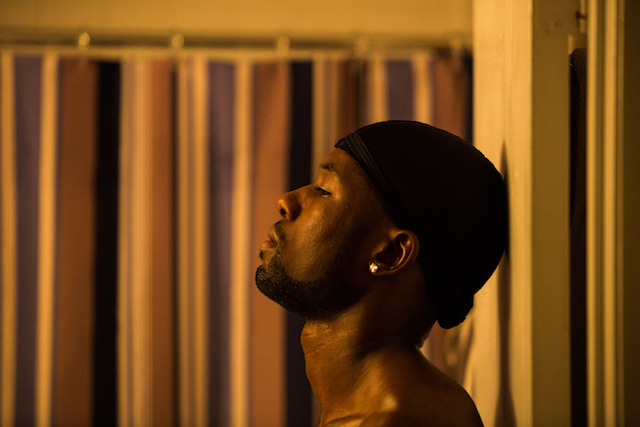 Trevante Rhodes as the young adult Chrion in 'Moonlight' (Photo by David Bornfriend, courtesy of A24)

These moments only occasionally pop up, and fade out entirely by the time the film reaches its diner climax: a secluded Chiron, now embracing a thug exterior while still haunted by his inner-self, finally face-to-face with a relaxed, always smiling Kevin (here played by The Knick's André Holland), years after their first connection. As if avoiding the tales most associated with black identity as well as queer identity, Moonlight ends on an entirely unexpected climax; the final three shots stake a claim in both an entirely ambiguous model of storytelling, while also articulating a clear revelation of emotion. Jenkins fittingly ends his film on a therapeutic moment——a release of a feeling so ingrained into a narrative that rarely shows its cards. He has crafted an old-fashioned melodrama with none of the familiar rhythms, thus bringing a story that feels so familiar into one of revelatory power.