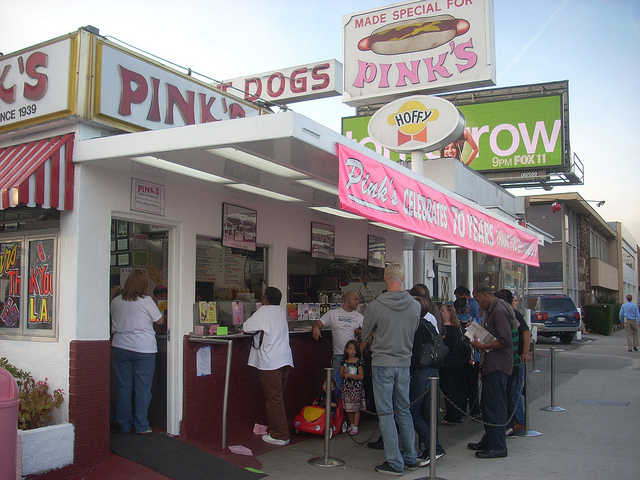 Who's L.A.'s arch rival? Many say the Bay Area, our friends upstate who inexplicably think their burritos are on par with ours. You could also make a case for New York City, as the West Coast/East Coast dichotomy has always made for good fodder.

Now, you can include Chicago on that list. The Dodgers and Cubs are duking it out for a ticket to the World Series, and the matchup has lived up to the billing. What's really igniting the rivalry between the two cities, however, comes down to hot dogs.

It all started with The Wiener's Circle, who's known for their "Char-Dog" and their inhospitable servers. You may remember them from a Conan O' Brien segment in which 30 Rock's Jack McBrayer dropped in on the stand and got chewed out by the staff for taking too long to order. "You gotta stop doing them drugs, motherf_____!" they told him.

Anyway, at the start of the National League Championship Series, the good people at The Wiener's Circle decided to throw shade on us Angelenos:

I hope LA is better at baseball than they are at hot dogs. Sauerkraut?!? What's next? Ketchup? @Pinkshotdogs stinks! Go Cubs!#dodgersvscubs

This would turn out to be the modern day Zimmerman Note—our assassination of Franz Ferdinand—as it started a full-scale war of words on Twitter. While The Wiener's Circle drew blood, Pink's went for the jugular as they invoked Steve Bartman, who'd infamously dashed the Cubs' NLCS hopes in 2003:

Will @SteveBartman03 B there tonight to help us out then? He can keep #Coghlin and #Soler company. #DodgersVSCubs #GoDodgers @Dodgers @Cubs pic.twitter.com/mWD1LzSEnf

The Wiener's Circle then put on us blast on their marquee:

Bring In your ringers @pinkshotdogs but remember @SteveBartman03 is a @Cubs fan. Beat the @Dodgers pic.twitter.com/zdIXfNU7Gx

The debate then touched on some pressing topics, like who has the better celebrity fans:

Cool how chicago beats La in being the coolest city, having the best improv, hotdogs, baseball team and guy named Bill Murray. #GoCubsGo

For the most part, it seems like The Wiener's Circle is more invested in this beef. After the Dodgers took a 2-1 lead in the series, they re-contextualized our win as a pity gift:

Nice of the @cubs to let the good people of LA forget their failed dreams of stardom for a night and enjoy this before our comeback.

Also, they're really harping on Pink's use of sauerkraut, which is apparently an act of sacrilege:

@DOGSnSHAKES @pinkshotdogs hey hey nothing against our german sauerkraut . its healthy and tasty

Inevitably, it all resulted in a bet. Pink's says they'll serve Wiener's Circle dogs from their own stand if the Cubs win the series. And, to give the bet a more civil gleam, they'll also donate money to a chosen charity. The Wiener's Circle agreed to the conditions, saying they'll serve Pink's dogs if the Dodgers win.

(1/2) It's on Your $ will go to @CubsJoeMadd charity WHEN cubs win. If @Dodgers win we'll give out free @pinkshotdogs style dogs for an hour https://t.co/t1JICio8JC

The war is ongoing, as the series is currently tied 2-2.

Are we witnessing history here? Will "The Hot Dog War of 2016" spark off a new metropolitan rivalry that's bigger than anything we've witnessed? Whatever, it's going to be, like, negative 15 degrees in Chicago this winter. So we'll let them have their fun.