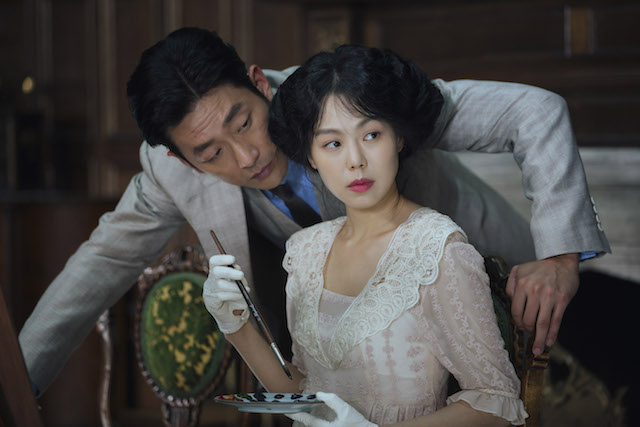 Despite the singular voice given in his films, Park Chan-Wook envisions himself as a collaborator. The South Korean director originally began as a film critic before turning to make films himself, splashing onto American screens thanks to the cult hit Oldboy. Since then, Park's films have continually made him an object of fascination for fanboys; they are elegantly violent and sophisticatedly grotesque. There are indelible images in his films of particular moments of extreme violence or sex, but Park's best qualities remain in the rhythmic orchestration of his actors, camera movements, music, and editing.

After one English-language film made in the United States with Stoker, Park returned to South Korea to make his latest film, The Handmaiden. Adapted from the Victorian Era-set novel Fingersmith by Sarah Waters, the film follows Sook-hee (Kim Tae-ri) in Japan-occupied Korea in the 1930s. In the opening scene, she is taken away from her family and placed in the care of a domineering heiress (Kim Min-hee) at a Japanese mansion. Twenty minutes in, however, we learn that Sook-hee is there to play a long con, which involves forcing her to fall in love with another man. But like all great con movies, the terms and stakes get messy—both emotionally and bodily, as the two women seem to attract each other instead of the men around her.

There are a number of moving parts in The Handmaiden surrounding sexual politics as well as cross-cultural politics between Japan and Korea. Park is no stranger to inviting controversy, but what remains more fascinating in his latest work is his weaving of cinematic elements in this complicated and winding narrative. He invites alert viewers to pay attention to each element, whether an odd detail of the costuming or the particular articulation of a key line of dialogue, and then rewards us with sumptuous scenes of bodily lust and bloody violence. Visiting Los Angeles, Park sat down to talk about some of the crucial collaborative efforts it took to envision such a madly elegant tale. 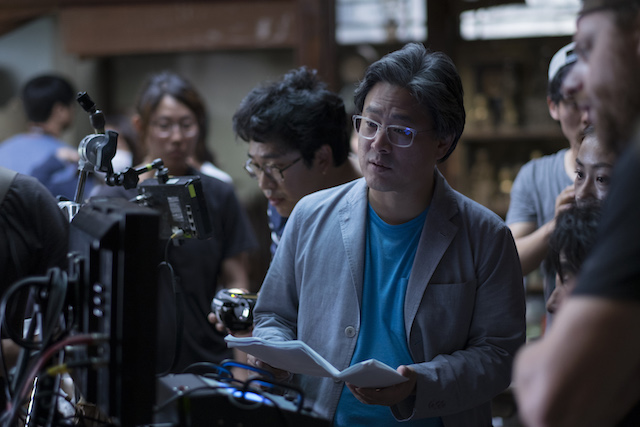 Director Park Chan-wook on the set of 'The Handmaiden.' (Photo courtesy of Amazon Studios/Magnolia Pictures)

In the film, you're working a lot both in the Korean language but also the Japanese language. This is not the first time you have made a film in a language outside your own. I'm curious about how you direct your actors and know whether they are articulating the lines the way you want when you are not fluent in the language yourself.

I don't! But isn't it the case that when you watch films in another language you can tell whether the performance is brilliant or not? It's the same thing for me. If I see a Robert De Niro performance I can tell whether it's a great performance or not. Of course, I go through the process of talking to the language experts a lot and make sure I participate in the process of when the actors learn the language so I can understand the nuances and finer points of how each line should be articulated.

The reason I ask is the film is so built around the performances of these two women. When you are working with your actors, what are the kind of directions you will give them? Is it about hitting certain marks or creating emotions? How do you get them to the place you want within your visual landscape?

It's really both. Before I get to the set, I talk to the actors a lot about emotions. What a character should be feeling at any individual scene. So when I do get to the set, it's much more about what marks they should be hitting.

Do you leave for any room for improvisation? I feel much of the film has to be storyboarded out very deliberately, so what room do you give the actors to change once they're on set?

There are two aspects of this. The way I restrict my actors, this restriction is not so limited in terms of the space they can move. In reality, I only give one or two restrictions for the actors to have their freedom. Some actors find that then they have an incredible amount of space to give their performance. Some actors find it still very confined. I would make the comparison between a pitcher in a baseball. When a pitcher is throwing his baseball to a strike zone, if you're not a very good pitcher, you think the strike zone is so small and so far away. There doesn't seem to be many ways to get the ball there. But if you are a good pitcher, you find the strike zone to be a big canvas. You choose which ball you want to throw, whether it's a curveball, whether it's a...

Slider! [laughs] There are endless possibilities! The second aspect of this, in addition to doing the storyboards, I do a rehearsal where it's not just about going through the script and reading lines. It is a forum where the actors are invited to give any other ideas they may have. Going through the script line-by-line with the actors and talking about why I've written a certain line or expression. If there are any questions, we talk about it until everyone is satisfied. And in the process, if they come up with some new idea, an action or a dialogue, I'll bring it on board. If we start from there, we have a strong level of understanding that when the actors get to the set, they may get inspired and come talk to me. If it adds to the picture, I'll take that on board. In that way, I rarely think I'm limiting my actors, even if I'm working from storyboards. 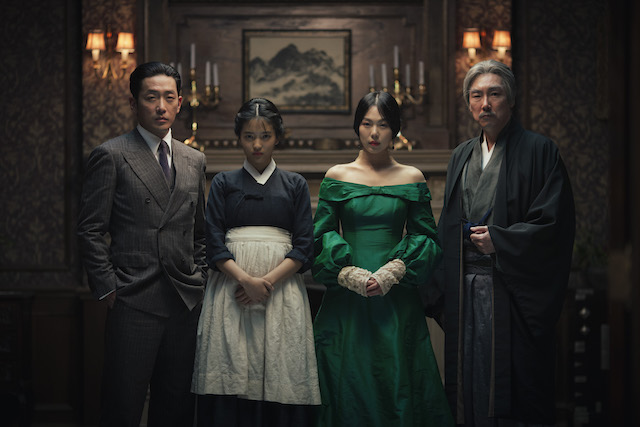 The film is mostly set in this amazing mansion. How much was sets that you constructed and how much was location work. It seems extremely interconnected.

The entire interior of the mansion was built on a soundstage. Of the 67 days of the shoot, we shot seven days in Japan. The exteriors of the house was in Japan as well as parts of the garden, and finally the temple where [the three principals] spend their first night.

When you're working with your production designer or costume designer, I feel like you must have had this tension between accurately re-creating the Japan and Korea of the 1930s, and another impulse that's more expressive and lurid. How did you try to balance those intentions?

It's not like where we sit around and have a discussion where I announce my intentions for an overall mood or style for the film. I actually start the dialogue instead from something very specific. Whether it be the costume designer or the production designer, I sit down with a copy of the script and go through it and ask questions. "Why do you think this character acts this way? What's going through her mind at this point? Does this man want to wear a traditional Korean wear or a Japanese kimono? Why would he be wearing it here?" My discussions are very specific from the beginning. Once we together decide on something, it provides a starting point that leads to other discussions as well. For example, we asked the question, "Does Kouzuki have a mustache?" And if we say yes we ask, "Why? What does it signify? What does it represent?" And then it allows us to talk about other aspects of the character, which then informs other parts of the costume as well. 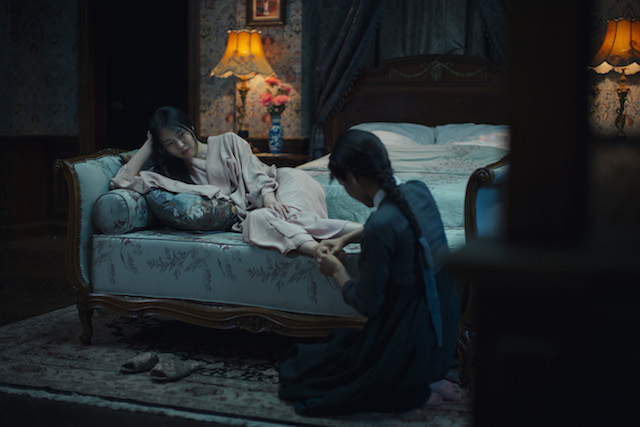 Genre-wise, this film reminds me of a lot of the great con-man movies like The Lady Eve and House of Games. Were there particular conventions that you wanted to play with or subvert as you were considering what this story meant for you?

When I make films, I don't say that I'm going to subvert this genre or take this genre and play within it, or do I ever say I'm going to borrow a certain element from a particular movie or genre or anything like that. I can't start from that standpoint. However, there is a bit of that in this film. If you look at the beginning, you see this woman holding a child and she seems to be the baby's mother. And then she seems to be giving this baby away while covered in rain, and seems to be torn away from the baby and the rest of the family to some Japanese household. Plus, there's a Japanese army walking around in the background of that scene as well. These are all kinds of misdirections. When she arrives at this seemingly scary mansion, it seems like it's going to gobble her up at any second. A very ominous, gothic mansion. The intention behind that is to keep on changing the mood so the audience isn't able to expect what is coming next.

Your films have a particular rhythm to them, whether it's the movement of the actors, the editing, and all set to the music you choose, both classical scoring and original. How do you develop a rhythm both on set and then when working in post-production?

Rhythm is essential. As I make more and more films, I become more acutely aware that rhythm is an important aspect to films. What's required of me is to actually pay attention to that aspect, even from the script writing aspect. Fortunately, I write my own films and I read it, I imagine line-by-line how I'm going to realize it. In doing so, I try and think about the rhythm. What's important is that it always needs to be interesting and engaging. If it's anything but, I have to be daring and be ready to cut that out. It has to be applied to every aspect of the filmmaking—not just the acting, but the camera movement and the editing. You have to be aware that it can never feel loose. And the final thing that brings it all together is the music. When the Blu-ray comes out, you'll see an extended version of the film. You might think this is an incredibly interesting bit and wonder why it was taken out, and there are 23 minutes of that. But when you look at it from the rhythmic standpoint, you'll be able to understand the release version is so much shorter.

The Handmaiden opens in Los Angeles and New York on Friday, with a wider release to follow.