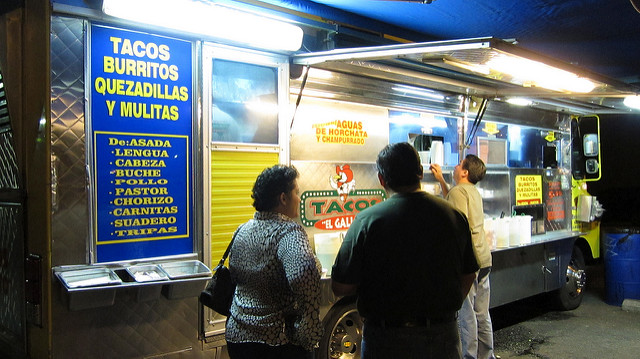 (Photo by Julian via the LAist Featured Photos pool on Flickr)

Remember when Marco Gutierrez, founder of Latinos for Trump, warned us about a nightmare dream scenario where there'll be a taco truck on every corner if Trump isn't handed the presidency?

Well, Trump will get getting a taste of that reality on Wednesday, when a collection of taco trucks will line up at 10 a.m. outside the Trump International Hotel in Vegas to form a sort of tasty protest. It's more of a unified wall of trucks, rather than a collection of trucks scattered around the street corner. Still, the message is a pointed one, as we all know about the Trump campaign's obsession with walls.

The event was announced by Culinary Workers Union Local 226, a union of hospitality workers in Nevada. The union has been around for more than 80 years, and currently boasts a membership of approximately 60,000 people. For the event they've whipped up a good hashtag to go with it:

"We're reminding Mr. Trump that immigrant workers here and across the country will be watching the debate and voting in November," Yvanna Cancela, the political director for the union, told Buzzfeed.

A.J. Delgado, senior adviser and Hispanic outreach director of the Trump campaign, was glib when asked by Buzzfeed about her opinions on #walloftacos. She thanked the organizers and said, "I never, EVER turn down a chance to eat some good tacos."

The taco trucks will be part of a larger protest against Trump. As noted by Eater, workers at Trump's Vegas hotel decided to join Local 226 last December. Since then, employees have been staging regular protests outside the hotel, saying that Trump refuses to bargain with the union.

As suggested in this event poster, some of the protestors at the upcoming Wednesday rally have a first-hand experience of what Trump is like as a person in charge:

The location of the upcoming #walloftacos is apropos in more ways than one. Aside from being in front of the Trump-owned hotel, the wall will also be a few miles away from the University of Las Vegas, where the final presidential debate will take place on Wednesday night.

We've left a message for a spokesperson for Local 226 to ask how many taco trucks will be at the event, and if interested taco truck owners will be able to join in on the party. We'll update with information as it comes.