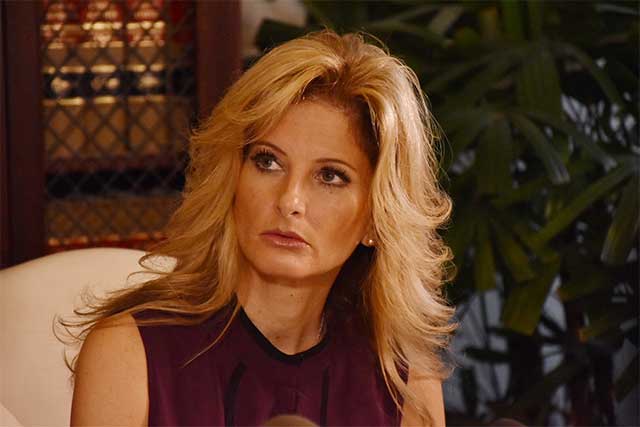 The hits just keep coming for political super-villain, sexual assault proponent and actual American presidential candidate Donald J. Trump. In the days after Donald Trump's infamous "grab 'em by the pussy" Access Hollywood tape emerged, über-lawyer Gloria Allred confirmed to our sister site Gothamist that she had been "contacted by women who allege inappropriate contact by Mr. Trump." On Friday morning, Allred held a press conference with former Apprentice contestent Summer Zervos, who said, "He came to me and started kissing me open mouthed as he was pulling me towards him... He then grabbed my shoulder and began kissing me again very aggressively and placed his hand on my breast."

Zervos also described how Trump thrust his genitals at her during what she thought would be a job interview at the Beverly Hills Hotel. She also said that Trump told her to default on her mortgage, which was in good standing. Allred said that Zervos, who is a Republican, is not planning a lawsuit yet and that she corroborated the story with two people that Zervos told the incident about. "She was very reluctant to come forward but...did so after hearing the Access Hollywood tape and hearing his denial that she needed to do so," Allred said.

A fifth season candidate on The Apprentice, Zervos, a restaurant owner who lives in California, said that she reached out to Trump in 2007 to ask about job opportunities and wanted to meet because she would be in New York, "I had the utmost admiration for Mr. Trump and even after I was 'fired' by him I continued to see him as a possible mentor and potential employer." His secretary arranged for a meeting with Trump, and when she got to his office, he "kissed me on my lips." She was startled, but assumed his was his way of greeting people. Trump complimented her, and Zervos recalled, "He said that he had never met anyone with my combination of being smart, attractive and with as large a set of 'balls' as I had." 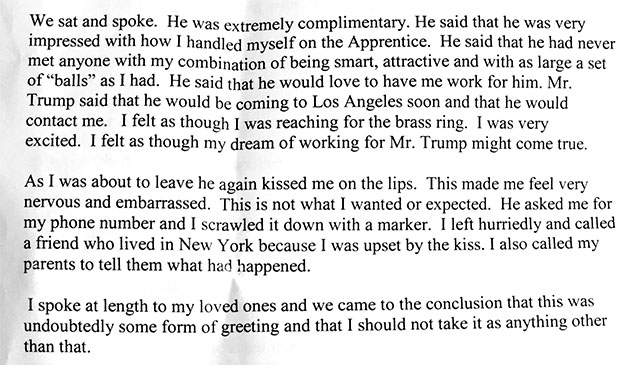 Trump asked for her phone number, which Zervos left and she returned home. He called her, chiding her for her handwriting because it was hard for him to read her number, and then, in another call, said he would be coming to Los Angeles and that they should meet. Zervos went to the Beverly Hills Hotel, assuming they would go to the restaurant, but Trump's security guard directed to her to a bungalow. "He came to me and started kissing me open mouthed as he was pulling me towards him," she said. "He then grabbed my shoulder and began kissing me again very aggressively and placed his hand on my breast." 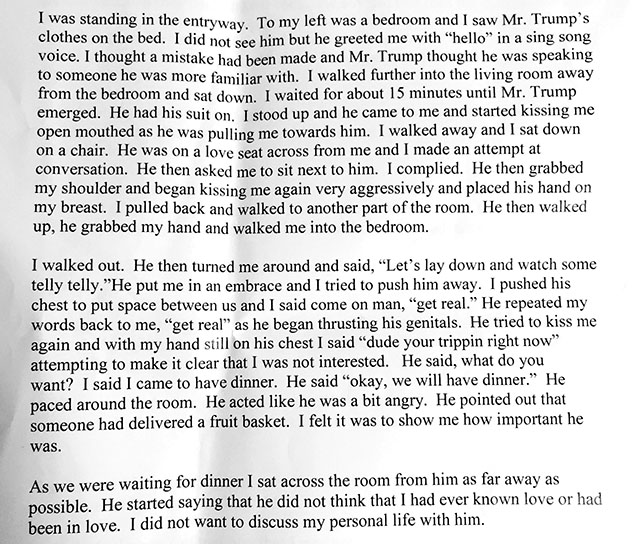 He also tried to get Zervos to "lay down" and watch "telly telly," she said, "I pushed his chest to put space between us and I said, come on man, 'get real.' He repeated my words back to me, 'get real' as he began thrusting his genitals. He tried to kiss me again and with my hand still on his chest, I said 'dude you're trippin' right now' attempting to make it clear that I was not interested."

After she made it clear she was only there to have dinner, Trump agreed, but paced around the room, Zervos explained, adding, "He started saying that he did not think I had ever known love or had been in love." Then he switched into job interview mode, and later told her not to pay her mortgage anymore. When Trump abruptly ended their conversation, he told Zervos to see him at his golf course at Palos Verdes the next day; she said, "I was very conflicted as to what occurred. I wondered if the sexual behavior was some kind of test and whether or not I had passed. Obviously, he still wanted to talk to me about a job even though I had turned his sexual advances down."

Zervos spoke to her father about what happened and decided to go to the golf course, where Trump introduced her to the general manager and she was given a tour, without Trump. She didn't see Trump again, and a few days later, the golf course manager offered her a job—at half her asking salary. "I called Mr. Trump and told him that I was upset and that I felt I was being penalized for not sleeping with him," Zervos told reporters. "Mr. Trump said that he was golfing and could not discuss this at that time." 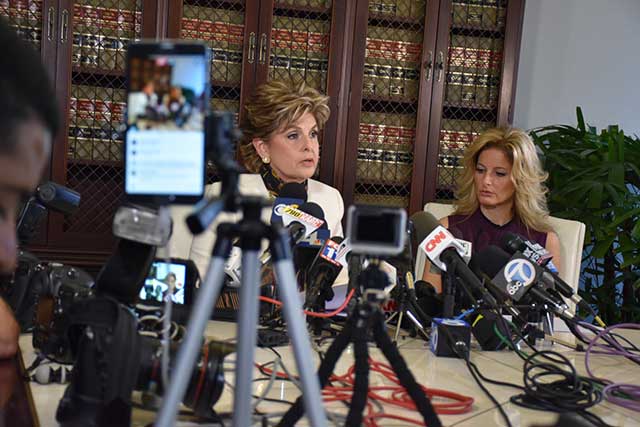 In a subsequent conversation about a job, Mr. Trump told me that I should never again use his private number and that if I want to reach him, I should contact him through his office.

Even though Mr. Trump had sexually harassed me, I still wanted to get a job within the Trump organization. I felt that since I had made it clear that I was not interested in having a sexual relationship with him that if he gave me a job it would be based solely on merit and we would be able to work together When I contacted Mr. Trump he asked me to send him a letter setting forth the jobs within his organization that I felt that I would be well suited for, which I did. When I subsequently spoke with him he gave me the run-around. He told me that he had not received the letter that I sent him and then told me that he could not afford to hire me as he was laying off thousands of employees. I was disappointed, but harbored no ill will towards Mr. Trump whatsoever and felt that there was no point in any further attempts to get a job with Mr. Trump.

When his presidential campaign was heating up this year, Zervos said, "Customers at my restaurant asked me about him as they knew I was a contestant on the Apprentice. I always complimented him and never said anything about what he had done to me at the Beverly Hills Hotel. However this caused me a great deal of pain and anguish and I felt the need to confront Mr. Trump and asked him to apologize to me for his behavior. I also thought that he might have been embarrassed by his beavhior and that this would provide him with an opportunity to clear the air. I had no idea about his behavior with other women at that time."

She contacted his secretary and assistant in April, asking to speak to Trump directly. She sent him an email stating, "Your interest in me as a potential employee meant the world to me. You interest in me as anything more blew my mind and I lost my footing... I have been incredibly hurt by our previous interaction," and closed with, "I hope to hear from you and wish you continued success."

Friday's press conference caps a week of alleged victims speaking out against Trump, with multiple women coming forward with specific allegations of sexual misconduct from the Republican presidential candidate. Zervos is the 10th woman to accuse Trump, including a former Miss USA contestant Temple Taggart McDowell; makeup artist Jill Hart who sued Trump in 1997; an anonymous woman who claims Trump raped her at age 13.

Friday's press conference caps a week of alleged victims speaking out against Trump, with multiple women coming forward with specific allegations of sexual misconduct from the Republican presidential candidate. On Tuesday, Allred, along with representatives from a number of women's groups, held a press conference outside of MGM's corporate offices and tried to deliver an open letter urging the company and The Apprentice producer Mark Burnett to release the footage (rumored to exist) of Trump's further misbehavior on the Apprentice set. The letter, however, was not delivered, as security guards refused to let Allred and company into the building.

At the press conference, Allred said, "Many people ask why accuser are coming forward now to alleged sexual misconduct by Mr. Trump. The answer is simple. Some may have held what they allege as a secret within them for many years. Some may have thought they would not be believed against what they thought would most likely be a complete denial by a rich, powerful celebrity. Some may have feared the wrath and retaliation of Mr. Trump and some of his supporters. Some may have though they were the only ones who were victimized."

Update [3:00]: Donald Trump has issued the following statement on the accusations by Zervos: