All anyone really wants (besides love, money, and world peace, of course) is the perfect neighborhood restaurant. You know what I'm talking about: Intimate and comfortable, but infused with a certain low-key cool, and steadfastly unpretentious, despite the fact that the food just happens to be really, really good. It's that spot your friends who live in New York are always bragging about having on their corner, a place that really feels like a place, and like it could have been there for ages, even if it only opened last month. 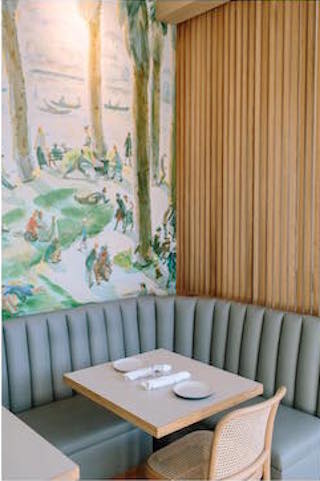 Interior at Winsome. (Photo by Winsome via Facebook)
Echo Park's Winsome has, for the record, been tucked away on the ground floor of The Elysian since February, though they only started serving dinner in August. And yes, the restaurant's nostalgia-chic diner interior does feel very much like it could have been there forever.

Facing the open kitchen from the warmth of one of Winsome's Pullman booths, one can almost imagine an alternate universe where the former Metropolitan Water District building it occupies didn't sit empty for 20 years before being reimagined as luxury apartments, and people had instead been living—and dining!—there this whole time. Only the news of Winsome's inclusion on Bon Appétit's 2016 list of America's Best New Restaurants shatters the been-there-forever fantasy, but we don't disagree with the food mag's conclusion. It's unsurprising that Winsome is the brainchild of Marc Rose and Med Abrous, the duo behind The Spare Room at the Hollywood Roosevelt Hotel, given the shared attention to atmosphere and perfectly rendered details at both establishments.

Though the restaurant is still better known for their all-day dining fare and unreal breakfast pastries, dinner at Winsome just as delicious as you would hope. Chef Jeremy Strubel, previously of Rustic Canyon, helms a menu where elevated takes on comfort food (the speck and Comté grilled cheese is to die for) meet the farro and gorgeously-plated farmers market vegetables often associated with dining on the hipster "eastside."

Most of the plates are made for sharing, and we would recommend bringing enough friends that you can try a little of everything. The aforementioned speck grilled cheese sandwich is exquisitely lavish and buttery, with plenty of savory kick. The torched kanpachi, our other favorite dish on the menu, is as light as the grilled cheese is rich, pairing pickled white nectarine, smoked golden beet, beet chips and flowering coriander with some beautiful yellowtail. The heirloom tomato salad, the farro piccolo, and the snap peas and spigarello are are also standouts.