Still looking for a costume for Halloween? If so, why not go with something that glorifies your love for L.A.? Here are some ideas that will let everyone know that your heart's with the Southland. 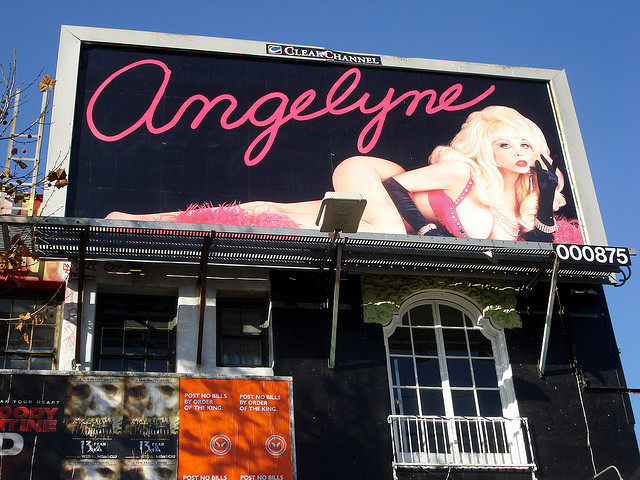 ANGELYNE
This is probably the best option for those who see Halloween as an opportunity to, shall we say, show some skin. You can customize the dress as you see fit (see this Google Image Search for some ideas), but it should be very tight, very short, and ideally pink or leopard print. Bonus points if you can find something that is pink and leopard print. Forever 21 might have some decent options, as could the far reaches of your closet. A decent pair of scissors can turn anything into a minidress, after all. Hair should be big and blonde. If you already have light-colored locks, you can go to town with substantial hairspray and some serious comb-teasing, but a wig would probably be the easiest route. For inspiration, check out Fergie's excellent 2012 Angelyne Halloween costume. Go heavy on the makeup, and don't be afraid of the pink eyeshadow.
Skill level: Medium+
Needed: Dress, wig, cleavage, some kind of furry shrug/jacket, makeup (pink lips, pink eyeshadow, heavy black liner, fake lashes), and pink shoes. Pink corvette and billboard are optional. 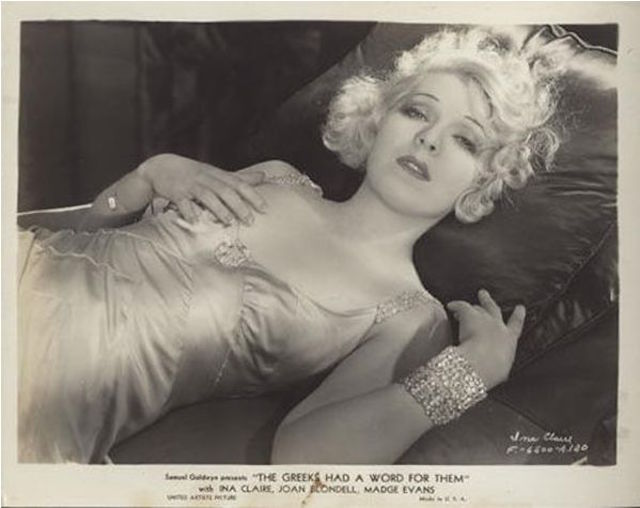 PRE-CODE HOLLYWOOD
We lied before! If you really want to use Halloween as an excuse for scanty attire and giving off sexual vibes, forget Angelyne—this is the costume for you. For a brief period of time between the birth of talking pictures and the enforcement of the moralistic Motion Picture Production Code censorship guidelines, Hollywood could do pretty much whatever it wanted. The pre-Code movies of the late '20s and early 1930s were risqué and provocative, with plenty of drugs, sex and general "deviance." Barbara Stanwyck's star turn in Baby Face (1933) was perhaps the most notorious of the pre-Code era, but there are plenty of others to draw from. All you need is some vaguely vintage-y lingerie, maybe a silk robe, and some soft curls in your hair. And be sure to do a little bit of a husky whisper when you're telling people you're dressed up as "pre-Code Hollywood."
Skill level: Medium
Needed: Vintage-y lingerie/dressing gown/slip, costume jewelry, period hair.

JAKE GITTES IN "CHINATOWN"
Telegraph your cinema knowledge, love of neo-noir, and questionable allegiance to Roman Polanski by dressing up as J.J. "Jake" Gittes from Chinatown, the greatest movie ever made. This is a classic, and pretty easy to pull off. In fact, you probably already own almost all the necessary supplies. The bandages and the fedora can easily be found with a quick stop at CVS and the smoking section of any bar in Silver Lake, respectively.
Skill level: Easy
Needed: Suit, tie, pocket handkerchief, old-school hat, white bandage for your nose. 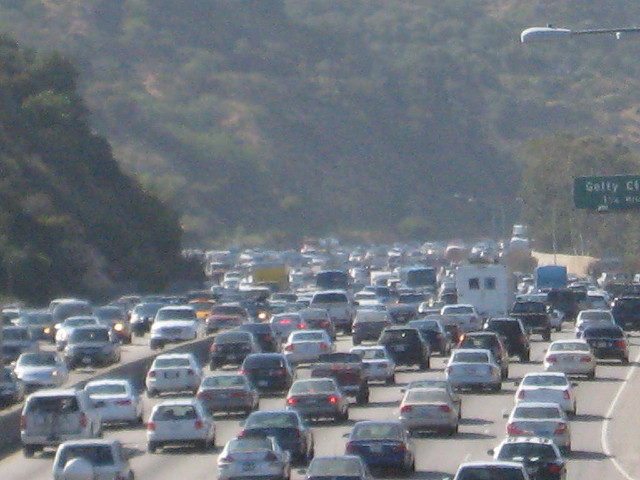 (Photo by BioFriendly via the Creative Commons on Flickr)

THE 405 AT RUSH HOUR
This one is part performance art, part costume. You can really wear whatever you want. All you need to do is affix a few toy cars to your outfit in whatever manner you choose (we recommend superglue). The important thing is that you lie down on the floor in the middle of the room once you get to whatever party you are going to. Remain completely immobile no matter how much it inconveniences everyone. Every ten minutes you can move an inch or so in your chosen direction, but this should be done so slowly that it's almost imperceptible. You are here for the long game. If you don't have the chutzpah to shutdown traffic on the party floor, you can always be The 405 At Rush Hour from a couch, but that's worst case scenario.
Skill level:: Medium
Needed: A few toy cars, commitment, chutzpah. 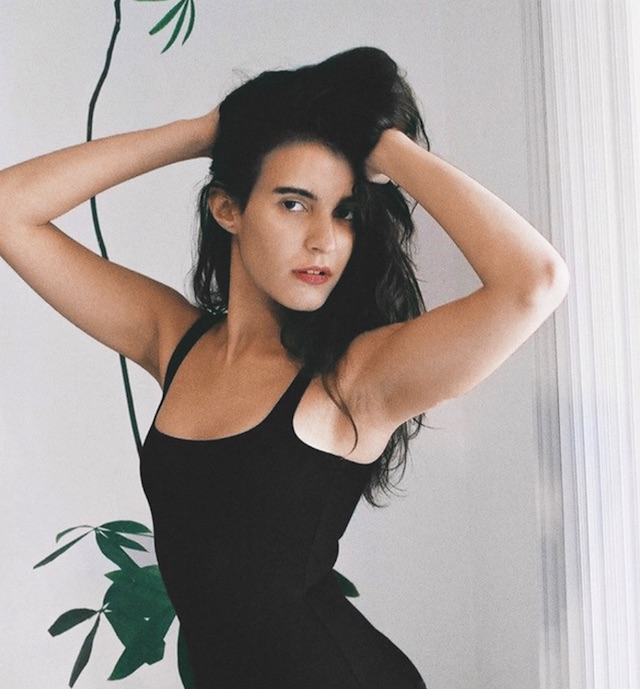 EARLY AUGHTS AMERICAN APPAREL MODEL
The saddest and best part about this costume is that you probably already own enough American Apparel crap to pull it together on the fly. If not, you can surely find it on sale for cheap at Buffalo Exchange or the like. Think simple, tight, and at least one item in spandex or mesh. The vibe here is both fresh-faced sporty and DTF. If you really want to go for it and you happen to have a friend who still owns one, you could even don one of those shiny figure skater dresses. It's also imperative that you do not, under any circumstances, wear a bra or brush your hair. Mention Dov's house whenever there is a lull in conversation.
Skill level: Medium
Needed: American Apparel outfit and hipster frameless glasses. A slight dusting of baby power around your nostrils is optional. 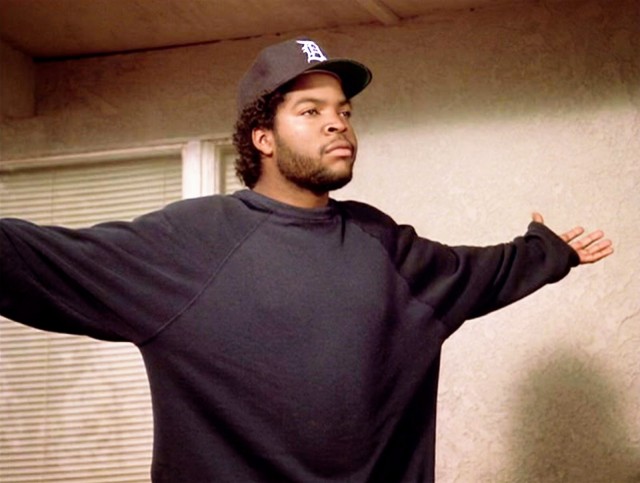 DOUGHBOY IN "BOYZ N THE HOOD"
What could be more L.A. than Ice Cube's star turn in Boyz n the Hood? Doughboy isn't just iconic, he's also one of our easiest to pull off costumes. All you really need are two things: a Detroit Tigers hat and a black sweatshirt. In a pinch, you can use a Raiders cap, since Ice Cube is certainly more known for those, but it's actually the Detroit Tigers one that he sports throughout this movie. And it should go without saying that white people should think really, really carefully before trying to pull this one off.
Skill level: Easy
Needed: Detroit Tigers cap, black sweatshirt. 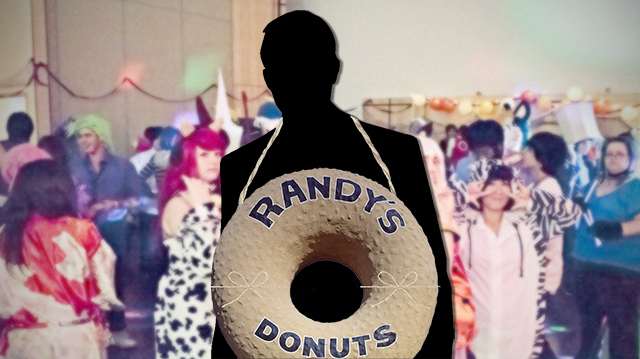 RANDY'S DONUTS
Surely you've seen the landmark Inglewood doughnut shop shaped like a giant doughnut on your way to or from LAX. It's one of our very favorite examples of a very L.A. architectural style: the fine art of buildings shaped like non-building things (also known as programmatic or mimetic architecture; see also the original Brown Derby). Impress architecture buffs, doughnut fans and frequent flyers with your very own Randy's Donuts costume, which is actually far simpler to pull off than one might initially think. All you need to do is buy a large inflatable inner tube, inflate it, spray paint it a light yellow/cream color, and write "Randy's Donuts" on it. You can affix the inner tube to your body by using a piece of thin rope or strong twine by tying a knot (not too tight or you may pop your costume) around each side of the "doughnut." Leave about a foot or two of string between the two knots, and then you can drape it over your neck, with the inner tube facing forward. If you want to switch up this costume, you can easily transform it into a "Slutty Randy's Donuts" variation by just wearing a bikini under your neck-draped inner tube creation.
Skill level: Medium hard.
Needed: Inflatable inner tube, light-colored spray paint, twine/rope, sharpie or black paint for lettering, potentially something to inflate the inner tube with depending on your lung capacity. 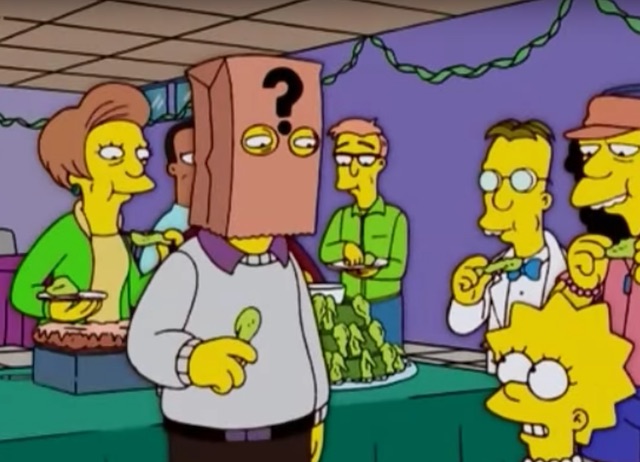 ALAN SMITHEE
No costume? No problem. When people ask what you are supposed to be dressed up as, just say Alan Smithee. It's just obnoxious and in-the-know enough for any L.A. party.
Skill level: Easy+
Needed: Nothing in particular.