Souplantation Will Close Up To 30 Restaurants After Filing For Bankruptcy 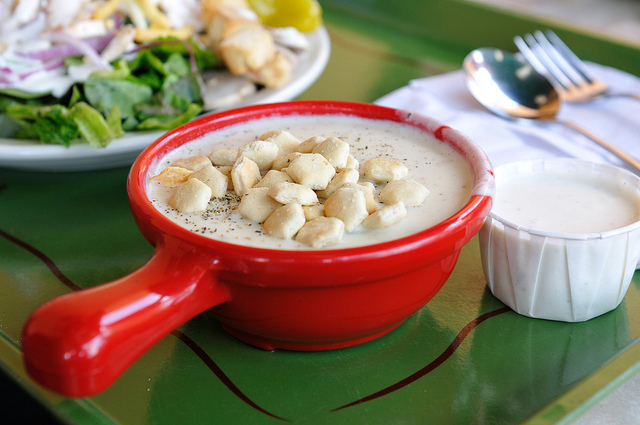 Clam chowder at Souplantation. (Photo by Michael Saechang via the Creative Commons on Flickr)

The San Diego-based Garden Fresh Restaurant Corp., which owns the Souplantation chain, has filed for chapter 11 bankruptcy protection, reports the Wall Street Journal. The move comes after the company had tried to look for a buyer and "yielded no bid whatsoever," according to court papers filed on Monday.

Aside from Souplantation, the company also owns a chain called Sweet Tomatoes, which is basically the same concept but with a different name. Altogether, Garden Fresh operates 128 locations across the U.S., reports NBC 7 San Diego. The company now plans to shutter 20 to 30 of these locations.

If you dig their buttermilk cornbread, you might be quivering in your boots right now. But fret not. As Garden Fresh Communications Director Don Cowan told LAist, all locations in California will be safe. Cowan had also informed us that the first ever Souplantation, which opened in 1978, is located on Mission Gorge Road in San Diego, so the chain's roots in Southern California are well-established.

Even if their California locations survive, things don't look so hot for the company, as it owes nearly $175 million in debt. And, as noted at the OC Register, all-you-can eat chains like Golden Corral have seen a general dip in patrons. According to data from Technomic, a market research firm, these restaurants generated $3.8 million in sales in 2015, down from $4.1 million in 2013. In March, Hometown Buffet also filed for bankruptcy. In 2011, Marie Callender’s (which isn't all-you-can-eat, but still shares the same down-home, sit-down atmosphere) closed 31 restaurants after filing for chapter 11.

Court papers show that Garden Fresh pins its troubles on declining sales, higher minimum wages, and higher employee benefit costs. Though, really, a higher minimum wage doesn't account for how these chains have been losing out in this age of foodie culture.

Whatever the reason, some people are super bummed about the news:

Though, if you're in California, you don't have much reason to groan. In fact, you can go out tonight and try some of these Souplantation food hacks.