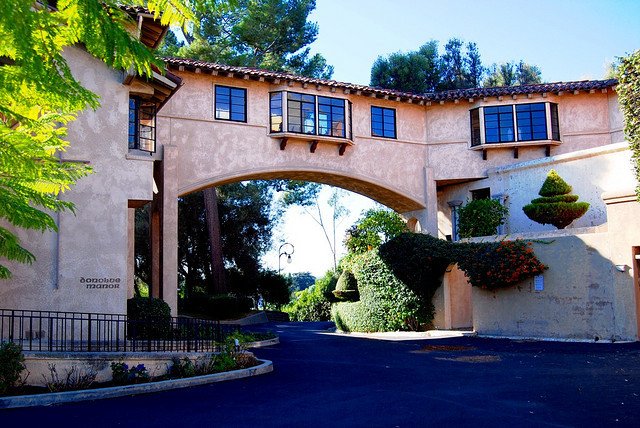 Donohue Manor, one of the former convent's main buildings (Photo by Michael Locke via the LAist Featured Photos pool on Flickr)

All Katy Perry wants to do is buy a convent in the hilltops of Los Feliz. Such things, of course, can never be easy.

A panel of State appellate judges has reversed a judicial ruling from April that appeared to clear the way for Katy Perry to purchase the Los Feliz convent from the Archdiocese of Los Angeles, according to City News Service. Back in April, an L.A. Superior Court judge invalidated another sale of the property by two nuns who once lived there (and claim they have the right to sell the land) to the restauranteur Dana Hollister, who wants to turn the property into a boutique hotel. That judgement, now reversed by the State judges, said the nuns needed to consult with the Archbishop José Gomez before the sale.

The Archdiocese of Los Angeles argues, instead, that the church is the rightful owner of the 8-acre estate in the hilltops of Los Feliz. Because the "Sisters of the Most Holy and Immaculate Heart of the Blessed Virgin Mary" are overseen by the church in accordance to orders issued in 2005 and 2013, the church has overriding ownership over any of the assets the Sisters hold.

This is a real-estate battle for the ages, especially given it's been raging on since June of 2015. Back then, the two nuns, Sisters Rita Callanan and Catherine Rose Holzman, rushed to sell the property to restauranteur Hollister (for $15.5 million) before the Archdiocese could complete its deal with Katy Perry (for $14.5 million). The conflict between the sales resulted with a lawsuit pitting Sisters Callanan and Holzman against the church.

Lawyers on behalf of the church and the Sisters duked it out for the greater part of 2015. Arguing before an L.A. County Superior Court judge, lawyers from the Archdiocese went so far to say that Dana Hollister swindled the nuns into selling the property, going so far as to forge a signature on some of the documents authorizing the sale. The eventual ruling in the case, at the county level, concluded that the nuns should have consulted with the archdiocese before making the sale. But the newest ruling from the state appeals court blows the whole thing wide open again.

This newest ruling says the L.A. County judge abused her discretion by failing to give the nuns' lawyers fair chance at gathering information prior to a hearing held earlier in 2016. Come October 21, a new status hearing will establish where everyone stands. The court processes will continue from that point on.

As for Katy Perry, all she wants to do is buy a the Los Feliz Convent. And who can blame her? It is beautiful.