Video: L.A.'s Roads Used To Be Way More Chaotic Than They Are Now

Sureeeeeee, it's a pain to drive in L.A. Everybody's looking at their phones, people drive like jerks and the traffic is absolutely nauseating. At the same time, it could be so much worse. Though it's kind of strange to think about, L.A.'s streets today are actually the result of nearly a century of thought and planning. Whether it's left-turn-signals or well-marked crosswalks, a lot of the infrastructure we take for granted today wasn't always here, and we should be thankful that we have it

The embedded video above, from KCET, shows us a brief window into a more lawless past on L.A.'s roads, when every intersection was un-signaled and lane markings were decades away. The first clip shown, above, comes from 1927, showing an intersection that looks to be either somewhere on Bunker Hill (now 'DTLA') or Echo Park, or somewhere between. The 89-year-old footage shows us a Los Angeles that's practically unrecognizable. Model T fords scurry around while streetcars pick up people who perilously wait—virtually unprotected from the speeding traffic—in the middle of the street. Pedestrians cross trepidatiously the street by slipping through tiny gaps through the quick-moving traffic. 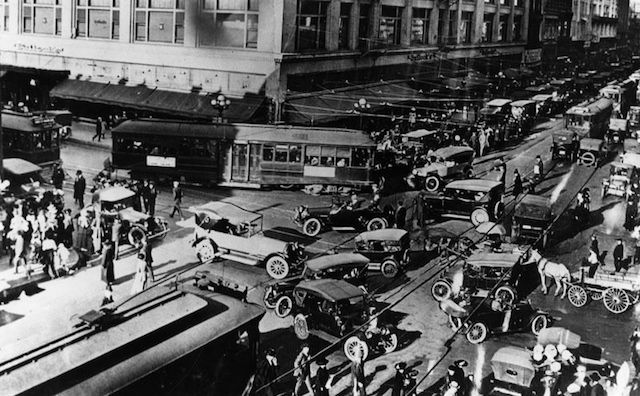 This picture shows the intersection of Broadway and Seventh Street sometime around the year 1920. Aside from the cars and pedestrians that frequent L.A.'s roads todays, the immense traffic jam above also includes streetcars and even some horse drawn carriages towards the right side of the picture. Notice the lack of anything remotely resembling a traffic light, crosswalk, or left-turn lane.

The second part of KCET's video shows some footage from the 1940s. By this time, Los Angeles had figured out that lanes, traffic signals and designated pedestrian crossings are a good thing. At the same time, driving etiquette is rather caviller. Passing quickly on the right, swerving across several lanes to make a turn and just stopping in the middle of the street all seem to be common in the (admittedly edited) snippets KCET shows us. Turn signals, as the video hosts note, seem to be an afterthought. While, sure, L.A. drivers still drive like this, the driving standard KCET's video seems to be notably lower than it is today.

Anyway, hope your Saturday is well. The next time you're sitting at a traffic light watching the countdown timer slowly work its way down to zero, instead of texting, think about how nice it is that there even is a countdown timer, and not one of these instead: 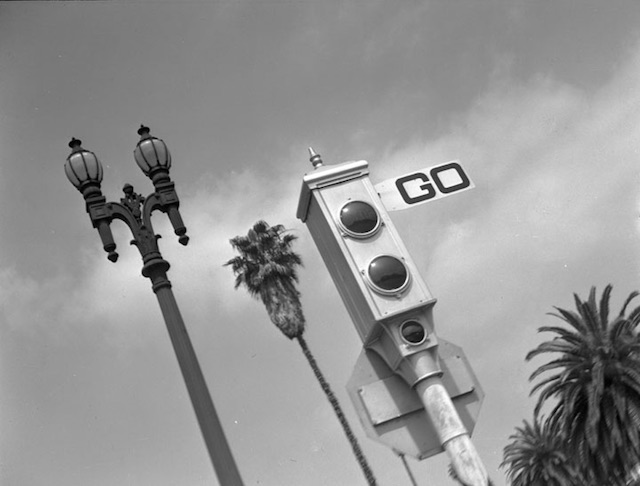