The 10 Best Doughnut Shops In L.A.

For a long time the doughnut has bore the burden of a bad rep. They were regarded as the preferred snack of underachievers, the physically inept, and incompetent nuclear power plant safety inspectors. But it's 2016 now, and we've dropped the guise of pretension. The fact is that the combination of sugar and fried dough is delicious. Is there anything more perfect than the first bite into a doughnut that's fresh out of the frier? There's the initial crisp, proceeded by the soft pillow of the dough. There's something both elusive and gratifying about it.

We've never met a doughnut we didn't like, but here are some of our favorites in town.

If you erected a museum devoted to dessert foods, doughnuts would comprise the Roy Lichtenstein wing of the building. Candy-colored, geometrically-pleasing, self-reflexive—the doughnut is the embodiment of pop art. Or maybe we should just say they're pretty?

At any rate, Colorado Donuts curates a daily spread of eye-catching goods. Their cereal doughnuts—which are Instagram-famous—are topped with everything from Cookie Crisps, to Fruity Pebbles, to Lucky Charms (though not all at once, as there's likely a health code against it). If you're looking for something a bit more...adult, there's the ube crumble cake doughnuts, which carry an aromatic sweetness.

Then again, no one walks into a donut shop to assert their sense of maturity. So may we suggest the Reese's Oreo croissant donut? Sure, it's got the gimmicky slant of fair food. But it's not all smoke-and-mirrors here; it's really as indulgent and delectable as it promises to be. 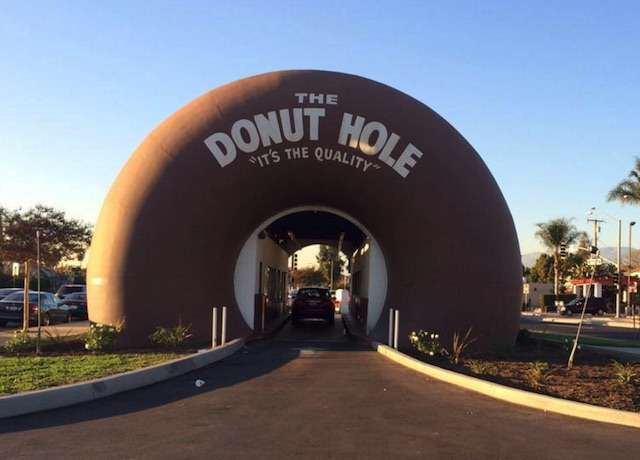 First things first: the building is shaped to look as if you're driving into a doughnut. Does this necessarily mean that the doughnuts will be good? Yes. Yes it does.

The Donut Hole hits that sweet spot between tradition and invention. Sometimes the treats are garnished with whimsical toppings like M&M's and Cinnamon Toast Crunch, and there's a chocolate bar that's coated in an extraneous blanket of chocolate chip. But the shop knows that the toppings don't make the doughnut; it's the dough that holds up the whole enterprise. As such, the condiments are kept in moderation, allowing us to admire the soft (and dare I say fluffy) texture of the dough.

With that said, the Donut Hole does have an unexpected speciality: the red velvet doughnut. It's moist, fragrant, and layered with a coat of cream cheese. It's a little out of left-field for this down-home shop, yes, but it's still a testament to good doughnut-making. And did we mention how reasonable the prices are? 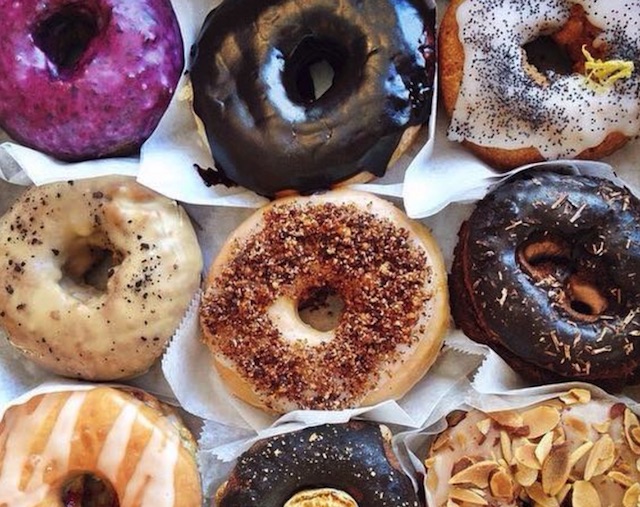 It's in Highland Park. The ingredients are mostly vegan. And yeah, the doughnuts are named after post-hardcore bands (a "Fudgegazi," anyone?). If you're rolling your eyes, just take a bite into the heavenly "GG Almond," or the blissful "Husker Blu," and you'll be staring at your amygdala.

In spite of what you associate with the term "vegan," the fact is that Donut Friend is about straight-up indulgence. The "Lemon Weapon" is packed with lemon cream, blueberry jam, fresh mint, and coated with a lemon glaze. The "Sriraschosin" comes with peanut butter, strawberry jam, coconut bacon, and a dash of Sriracha sauce. And the "S'Morrissey" is an ungodly configuration of chocolate cake, toasted marshmallows, and graham crackers—may we suggest the alternate name of "Heaven Knows I'm Miserable Now"?

You can also go the DIY route. How about a doughnut stuffed with Bavarian cream, caramelized apples, pecans, and cheyenne pepper? Serve it up on a plate and name it after your favorite SST band. 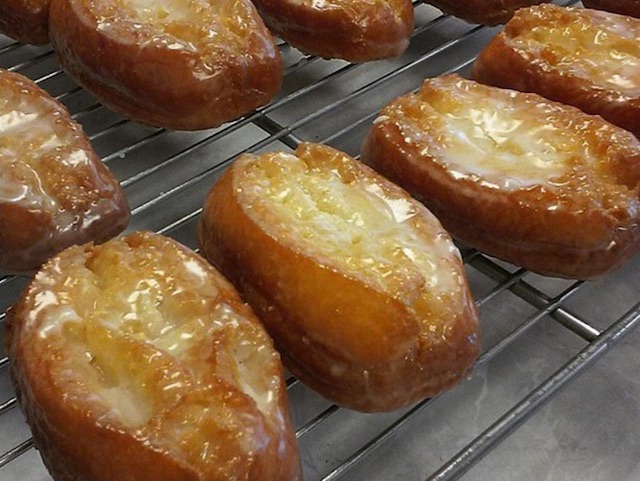 Situated at the corner of a mini-strip mall, Primo's Donuts is the definition of nondescript.

By looks alone, it's hard to distinguish it from any other doughnut shop. But Primo's, which has been around since 1956, is a master at perfecting the details of traditional doughnut-making. Rather than loading their goods with bells and whistles, the shop prides itself on a handful of specialties. The buttermilk bar, which is pleasantly dense, is something of a legend around these parts on Sawtelle. The cinnamon buns have a wonderfully moist and doughy center. And their twists are glazed to perfection—seriously, they have the waxy sheen of a Madame Tussauds statue. Also, remember to check out the weekend specials, which often includes their freshly-baked blueberry scones.

So you might not be able stick a Twizzlers in your treat at Primo's, but the shop reminds us that the doughnut is itself a work of perfection. 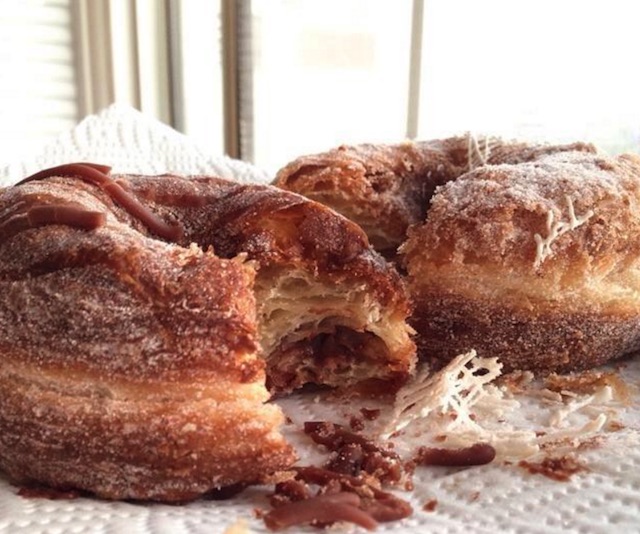 What do doughnut aficionados think of the cronut? Do they welcome its novel approach? Or do they regard it as a passing fad?

Either way, Kettle Glazed Doughnuts has gone a long way in legitimizing the cronut. Their version is airy and flaky, but also wholly gratifying. This is largely thanks to the sheer size of the cronuts, which are about the size of an armchair. There's also a custard filling that serves as a nice contrast to the flakiness. If you're too full to indulge in a full-sized cronut, the shop also serves "miniature" versions that, depending on your mood, may be infused with mocha or dusted with pistachios.

Oh yeah, the shop has regular doughnuts too. The PB&J doughnut is a nice take on the pedestrian (but still tasty!) jelly doughnut. The Boston creme is perfectly supple and has a rich, custard-filled center. And, true to its name, the blueberry bacon maple doesn't skimp on the pork.

Kettle Glazed Doughnuts may have an air of innovation, and the prices are perhaps more that what you're used to for doughnuts. But the shop goes all out when it comes to the portions and quality. 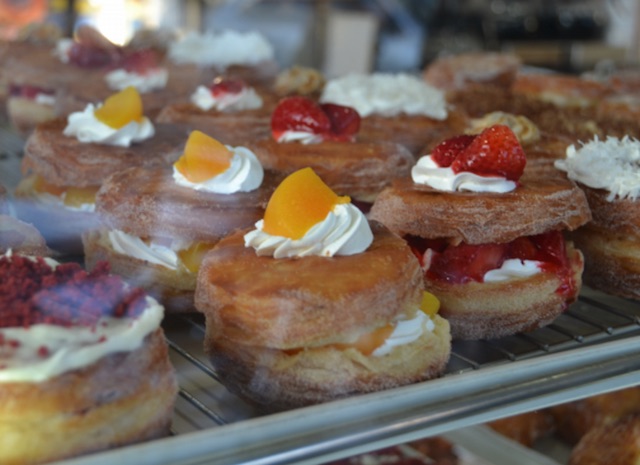 So maybe cronuts are here to stay, as this is the second cronut-purveyor on this list. Though, excuse us, they're called "skronuts" at this shop.

While you may be wary of the whimsy, the fact is that the skronuts are satisfying and exquisite. The apple pie skronut has an apple filling that's wedged between two halves of a cronut. There are similar versions with peaches or strawberries where the center is comprised of fruit and cream. And if you're looking for something more substantial to start your mornings, there's a breakfast skronut that includes bacon, eggs, cheese, and a sausage patty.

All in all, SK's takes a maximalists' approach to their menu. Aside from their skronuts, the shop also rounds the bases with cereal doughnuts, bacon-topped doughnuts, and red velvet doughnuts. They even do a riff on The Donut Man's strawberry treat. The store is virtually the Wikipedia of fried dough. 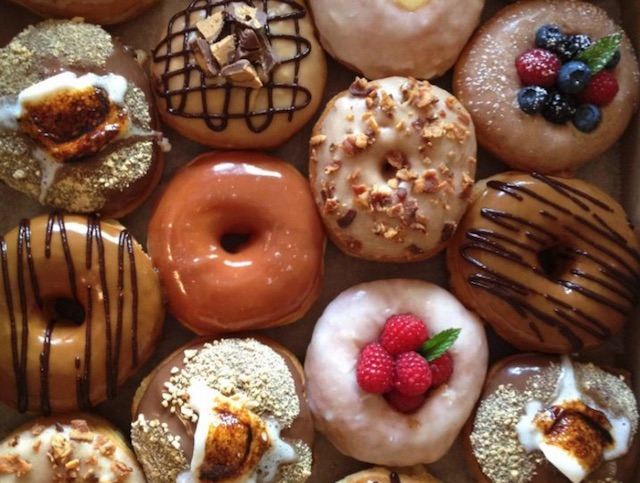 The spread from Donut Snob. (Via Donut Snob/Facebook)

How about some bespoke doughnuts? Ones that you can take to the Kentucky Derby, or to St. Barts for a weekend getaway?

Donut Snob lays it all out in its name. As noted on the shop's website, the store aims to "[elevate] an American classic into something closer to culinary perfection." So no, you're not going to find any bacon bits on these guys. What you will find is a "blueberry Earl Grey," which is fragrant with a mix of blueberry puree, an Earl Grey tea glaze, and fresh blueberries. There's also the "razzy lemon lulu," which is a tart surprise that's replete with a lemon glaze, a raspberry coulis center, and fresh raspberries perched on top. Our favorite might be the "salted caramel," which is doused in a house-made caramel glazed and anointed with sea salt flakes. Even their most basic ingredients have an air of haute high-mindedness. The vanilla is a pure Madagascar bourbon vanilla, and the chocolate is Belgian dark chocolate.

Likewise, the prices are on the higher end. Keep in mind, though, that you're not just paying for the doughnuts, but also for the privilege of being in their presence. Also take note that this is a delivery-only shop. A large swath of the county is covered in the delivery area (check the website to see if you're inside the zone). 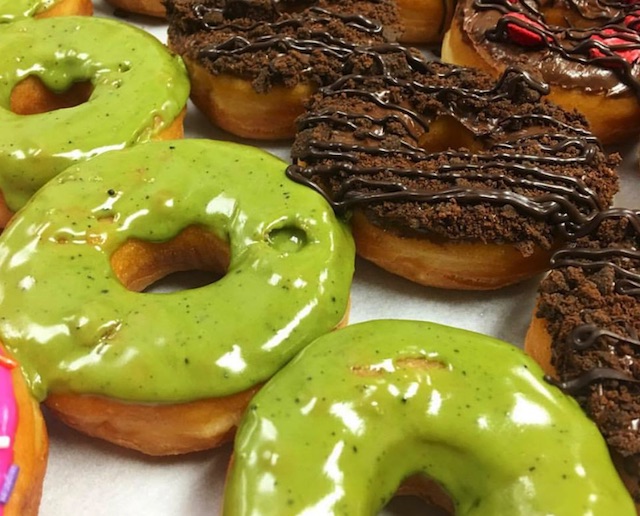 Matcha green tea donuts (and others). (Via California Donuts/Facebook)

Why isn't it easier to find a matcha green tea doughnut? By now the flavoring has been spotted in almost everything, from Frappuccinos to Kit-Kat bars. Apparently you can even find it in a bottle of Coke. It all makes sense, too, because green tea allows for that perfect contrast of sweet and bitter, with a mildly herbal undertow. It satisfies our sweet tooth without resorting to that chemical-tasting brightness.

So, again: Why aren't there more matcha green tea doughnuts? California Donuts has been asking this question too, and they do a version of it that's sublime. The green tea glaze has a shade of green that makes you think of verdant pastures on a hillside in Scotland. The taste is aromatic but not overbearing, and the dough is delightfully airy and substantial. They do other doughnuts too, and it seems as if the shop's philosophy is to aim for max adorableness. The "pink d'oh-nut" is an exact sendup of Homer's favorite treat. The panda doughnut has a face made of Oreo cookie cutouts. They also have cereal doughnuts, because of course they would. There's also something called the Snickers doughnut, which has a Snickers bar nestled in the center of a doughnut bar—give it a try if you're feeling reckless.

P.S.: There are other shops with the "California Donuts" nameplate, but it's the Koreatown store that you're looking for.

P.S.S.: Cafe Dulce in Little Tokyo has a great green tea doughnut too, but it's not strictly a doughnut shop, so we didn't give it a spot on this list. But yes, take note of Cafe Dulce if you're lusting for green tea. 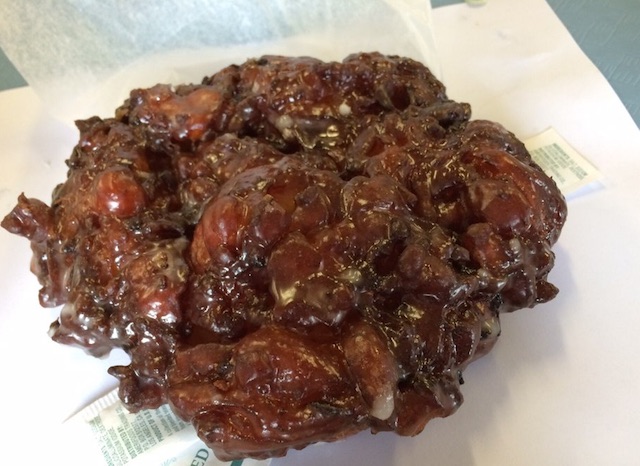 Nestled inside the Farmer's Market next to the Grove, this shop is a bit harder to reach. And while Bob's makes a good, honest doughnut, the parking situation might be a bit much for someone who just wants a maple bar.

Still, you won't regret making a pilgrimage to this shop, especially if you're a fan of apple fritters. Bob's version is peerless—the shop knows that the trick to any good fritter is an exterior that packs a bit of crunch, followed by a warm center with a lot of give. This juxtaposition is akin to nirvana, and the textural contrast in Bob's fritter is especially pronounced.

While you're here, you may as well treat yourself to a tender bearclaw, or one of their comically huge doughnuts that have the circumference of basketball. Another notable thing about Bob's is that they pay as much attention to their coffees as they do to their desserts. You may associate doughnut shop coffee with tepid water that packs as much caffeine as a James Taylor album. But Bob's serves up some strong brews that use beans from around the world. There's the Colombian Supremo and the organic Sumatra. The shop says that, every day, they have 10 gourmet brews on hand. 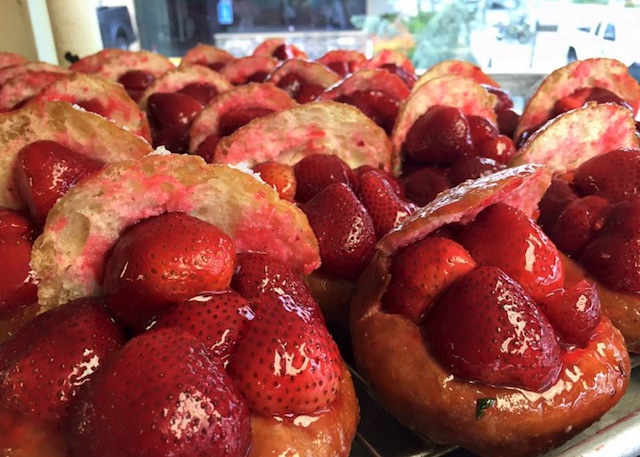 Classic. (Via The Donut Man/Facebook)

There's no chance we're leaving out The Donut Man, lest we wish to stir the vengeful spirit of Huell Howser, who'd declared their doughnuts to be "the best."

What's left to say about the shop that hasn't been said already? The strawberry-filled doughnuts are close to becoming a monument in L.A.. The doughnut (more like a baseball mitt made of dough) is soft and coated with a fine glaze. The syrup is not overdone—just enough to give you that rush of sugar, but not so much as to be overbearing. It's the strawberries, of course, that anchor the menagerie. The fruit is crisp, plump, and weirdly hearty. Taken altogether, this is the only doughnut that makes you feel (almost) good about yourself after mass consumption.

But lets not forget that The Donut Man has other delectable offerings. The peach doughnut is just as coveted. The apple fritters seem to fly off the shelves. And the tiger-tails, while seemingly basic, are irresistible.