Videos: The Line Was Massive At London's In-N-Out Pop-Up 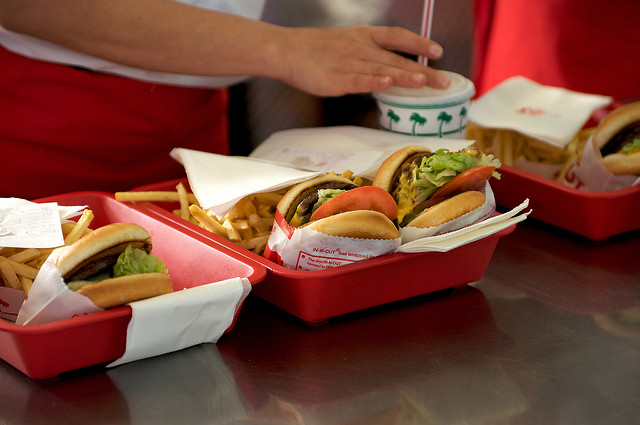 (Photo by jakerome via the LAist Featured Photos pool on Flickr)

We noted on Monday that an In-N-Out pop-up was coming to London for a few hours. Well, it happened on Wednesday, and the event was as enormous as predicted. Just take a look at this insane line (or queue, if you will):

When #in-n-out burger come to #London for 4 hours pic.twitter.com/RfwrIqH6P3

According to the Evening Standard, the line started forming as early as 8 a.m. (the pop-up opened at 11 a.m.). One person estimated that about 300 hungry people were in line before noontime.

Vice's Munchies went out there to talk to some of the (prospective) patrons. They noted that the line was comprised of a lot of U.S. expats. "I'm from San Diego so this just reminds me of home, basically," said one California native. "I've lived out here for ten years, and every time I go home this is my first stop."

There were a lot of true-blue Londoners, too. And it seemed that most of them knew the lingo. A few of them told Munchies that they were gearing up for a double-double, animal style. One person, however, was a little lost in the mist. "I'm getting an Animal Burger," she said. "Which I believe is with extra relish."

One bit of notable detail: Instead of the usual french-fries, patrons were served "crisps," which were basically potato chips. That's a little weird.

Here are some images from the line. They really make you feel glad to be a Californian.

In-N-Out Burger London pop up was Woodstock of fast food. In n out in less than 1 hr? #bringmoreburgers! #in #burgerhype@innoutburger pic.twitter.com/erJxeSstk0

A wristband guaranteed you a burger as long as you stayed in line. Apparently, this guy got the last one. He's like the Charlie Bucket of burger joints.

The very last #InNOutBurger wristband. Currently wondering if I should sell it for a small fortune #London pic.twitter.com/hnAiicGhiC

And here are some of the workers for the day. There is nary a wrinkle to be found on those red aprons:

Quite a few people had to be turned away, unfortunately. And some had complained that the communication was lacking:

And this guy may be drowning his sorrows with pints of Guinness:

Brexit, Bowie, Harambe and In-N-Out in London selling out. In that order. #InNOutBurger #soldout #2016sucks

Market Watch believes that there's a possibility of a permanent In-N-Out coming to London. We hate to break it to our international friends, but that's probably not happening anytime soon, as In-N-Out is notorious for resisting the urge to franchise.

We Americans may feel a tad guilty for our good fortune. But whatever, we know what's for dinner tonight:

I'm not sure what happened today but it definitely involved queuing too long. #InNOutBurger #innoutlondon 🍔🍔 pic.twitter.com/NdKbiW3gxW