In Defense Of The Expo Line 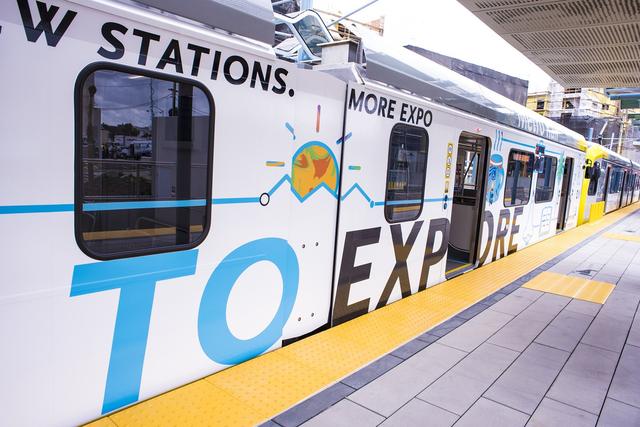 If you couldn't already tell, we love the Expo Line here at LAist. Aside from providing us with an easy way to get to work, it signals a fundamental change in how Angelenos can get around the city. Instead of relying on a personal car and the 10 freeway, Angelenos can travel from downtown to Santa Monica (and vice versa) aboard a train for the first time since 1953. And Angelenos are doing so. A survey published by Metro last week determined that roughly 70 percent of the riders aboard the train these days are new riders—defined as "new" since the extension opened in May—and that nearly half of these riders switched to riding the train from driving in their cars.

These are pretty good numbers. In August, daily ridership aboard the train averaged about 43,000 passengers a day, already 70 percent of the predicted average for 2030. Riders aboard the train feel safe, and are generally satisfied with the service of the train.

Of course, there are bugs. An L.A. Times article published in late August found that, during its first full month of service in June of 2016, the train line was the most consistently behind schedule rail line in Metro's network. At the same time, passengers on the train, especially during rush hour, wrangle aboard extremely crowded trains. Those in wheelchairs or bicycles might not get a spot.

Speaking to the scheduling challenges, it's only expected that service would be spottier during the first month of service of a brand new line. Train operators are getting used to the ebb and flow of the route, and signals might still need some tweaking. It's also important to note that the Expo Line wasn't designed to be the absolute fastest way to travel between Los Angeles and Santa Monica. Expecting a train that's limited to 55 mph and stops at 19 different stations to be quicker than a car on a freeway is unrealistic. That the travel times between Santa Monica and downtown Los Angeles on the Expo Line and the 10 freeway are roughly comparable (45 minutes give or take) speaks less about the purported inefficiency of the train, and more to the woeful condition of our car-centered infrastructure. Perhaps the Times should investigate delays on the 10.

As for the crowding, Metro opened the line with a shortage of train cars that translated into infrequent service and small, two-car trains. Passengers trying to crowd into the train and preventing the doors from closing in a timely manner also affects the train's ability to stay on schedule. By now, in September, Metro has received enough train cars to operate three-car trains every 12-minutes, effectively a 50 percent capacity increase over two-car trains operating on the same frequency. By December, Metro hopes to have enough trains to run two-car trains every 6 minutes, another 50 percent increase.

But this is only recent news. Though the Expo Line has been open since May, it's only the latest in a long line of trains to travel between downtown L.A. and Santa Monica. 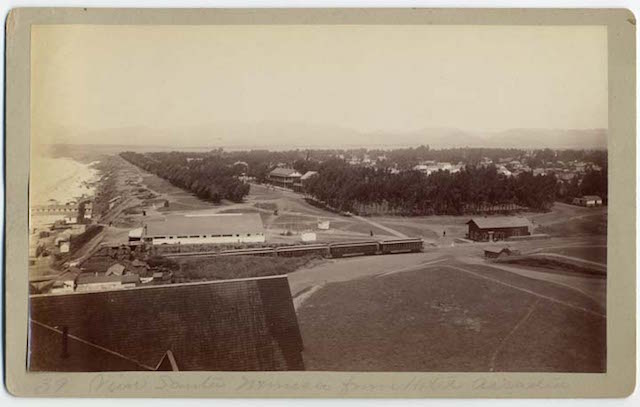 Called the Los Angeles and Independence Railroad, the first train between Los Angeles and what is now Santa Monica opened on January 4, 1875. The train was the result of a partnership between a silver magnate named John P. Jones (who built the railroad) and sheep ranchers Robert and Arcadia Bandini de Stearns Baker to build a resort town on the Rancho San Vicente y Santa Monica. This was the very beginning of Santa Monica as we know it today. Jones and the Bakers are regarded as the city's founders, and it wasn't long (July, 1875) before they were selling land along the same grid that Santa Monica still follows today.

As for the train, it ran a roughly 16 mile route between a depot at 5th and San Pedro streets in downtown Los Angeles, and another depot in Santa Monica. Service consisted of a steam-powered train that offered two daily trips between either end. The train's maximum speed was a blistering 20 miles per hour. As for the cost, passengers could pay $1 for a trip to the beach, and freight haulers payed an identical rate for per ton of cargo. The picture above shows the Santa Monica terminus as it looked in 1888. 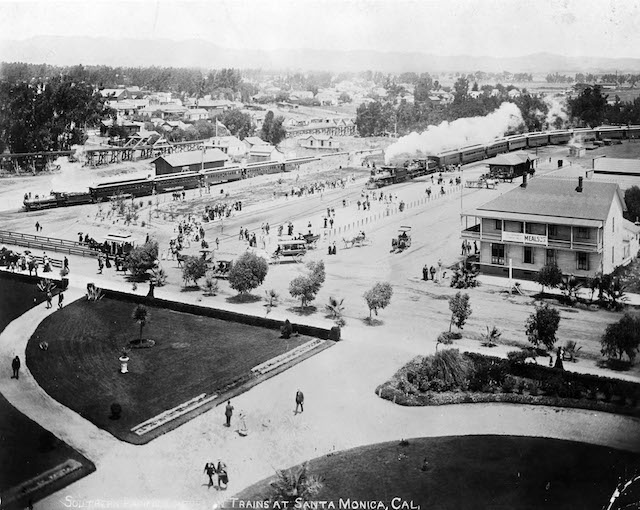 As for the route, ranchers throughout the Los Angeles basin eagerly ceded land for the train since it meant shipping freight off their land was greatly simplified. Though the train followed a different route between downtown L.A. and USC than the Expo line does today, the alignment between USC and Santa Monica of the Expo Line today is identical to that of the Los Angeles and Independence Railroad. The next time you're cruising on the Expo Line, say, through Westwood, take a second and try to imagine what the landscape around you looked like 140 years ago, from the seat of a train traveling in exactly the same spot as you now. 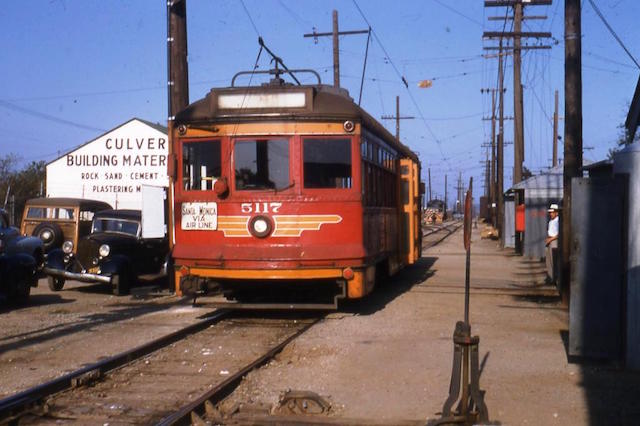 This new train line was renamed the Santa Monica Air Line. Still following the route the Expo Line follows today, the Santa Monica Air Line offered direct connection between the coast, Culver City and central Los Angeles. The problem with the new Air Line, however, as Nathan Masters at KCET points out, was that the tracks themselves were old and bumpy. Compared to more modern lines along Venice and Culver Boulevards, the ride supplied by the Air Line was uncomfortable. In 1908, service between Los Angeles and Santa Monica was offered hourly. By 1924, the Air Line was down to one train per day. In 1953, service was discontinued, ending passenger service that had been continuous for nearly 80 years. Sporadic freight service continued along the tracks until 1988. Metro purchased the right-of-way from Southern Pacific in 1990. 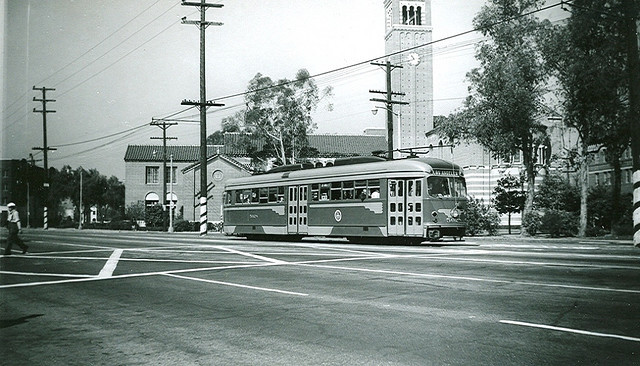 By 2000, Metro had spent a decade studying potential uses for the right-of-way, by then called the "Mid-City/Exposition Corridor." A decade of deliberation resulted in the selection of a light rail option—the Expo Line as we know it today—which began construction in 2010. Phase 1 of the Expo Line, from downtown L.A. to Culver City, opened in 2012, and Phase 2, from Culver City to Santa Monica, opened in May of 2016. 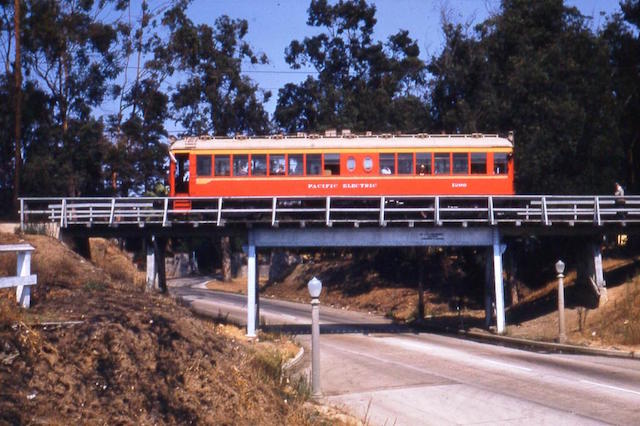 LAist is starting a new series on transportation, working to both provide some significant coverage of L.A.'s development into a train town, as well as giving some tips and guides for our readers on how to best get around the city (whether it be by car, bus, bike, train, or even foot). In the "Ask A Transit Nerd" column, we will tackle some common misconceptions and answer your pressing questions. If you have a question, drop us a line with the subject line: "Ask A Transit Nerd."