The Best Pizzas In Los Angeles

Is there anything better than a smoking hot pizza, straight out of the oven and dripping in mozzarella and fresh tomatoes? We think not. In fact, we'd even be willing to expand our proclamation to include not just that perfect red sauce and cheese combo, but also all sorts of creative renditions on the classic dish. And here in L.A., there is a pizza pie for everyone. These are a few of our favorites. 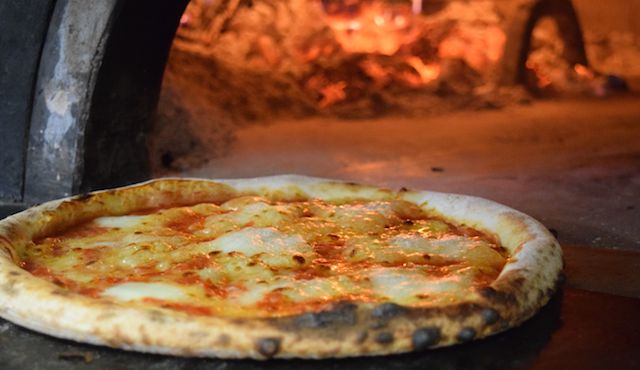 East Hollywood's DeSano offers up a taste of Naples by way of Nashville, where the restaurant began with its first brick-and-mortar. For such authentic pizza, the whole setting is very low-key cool. Order at the counter in front and then make your way into the surprisingly cavernous main room, complete with long wooden tables and a mouthwatering view of the line of wood-burning ovens against the back wall. The real gem at DeSano's is their classic margherita, rendered in perfect San Marzano tomato, buffalo mozzarella, basil and garlic simplicity. Start there, and then if you're feeling hungry expand out to the specialty pizzas, which are also something to behold. 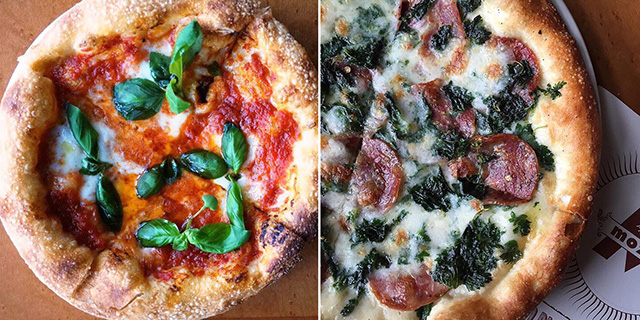 What would our best pizza list be without Mozza? The acclaimed duo of Mozza restaurants (the Pizzeria, and the Osteria next door) have been hailed with the highest of praise since setting up shop in Los Angeles in 2006, and in just a decade the brand has become somewhat of an L.A. institution. It's bread maven Nancy Silverton plus Italian food king Mario Batali—a combo that almost reads like food-world fan fiction. The upscale pizzas are loosely influenced by the thin-crust fare found in Naples, and Silverton's La Brea Bakery roots are stamped all over the exquisite dough (“soft chewy in spots, crisply charred in others, ever so faintly sweet, even more faintly sour,” in the words of Frank Bruni, who, fwiw, we really wish would abandon the op-ed pages and go back to food reviewing) . In terms of ordering, you really can't go wrong—though we particularly recommend the squash blossom pizza (squash blossoms, plus tomato and burrata), the bianca (ontina, mozzarella, sottocenere and sage), and the stinging nettles and finocchiona salame pie. 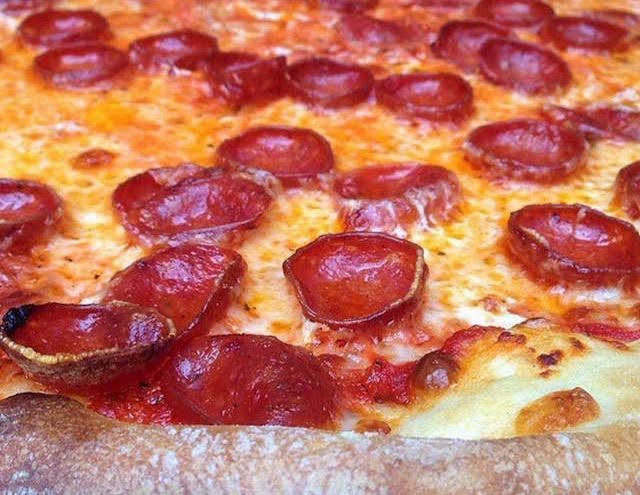 L.A. has its share of good pie (as evidenced by this list) but we can't beat NYC when it comes to the type of walk-in, sold-by-the-slice casual spot that's found all over Manhattan. Pizzanista!, however, dreams that we can aspire to those heights. It's fast, easy, and yes, you can buy by the slice. The pies are thin (as they should be), but there's enough of a crisp to give them substance. And the cheese has the perfect amount of body; you actually have to work through the mozzarella, which means you get that much more of the taste and aroma. Of course, you can go no-frills with a basic slice. But you can also heap on the frills, too. How about some soppressata, or vegan bacon? And if you're feeling profligate you can get the famed mac-and-cheese pizza. —Tim Loc 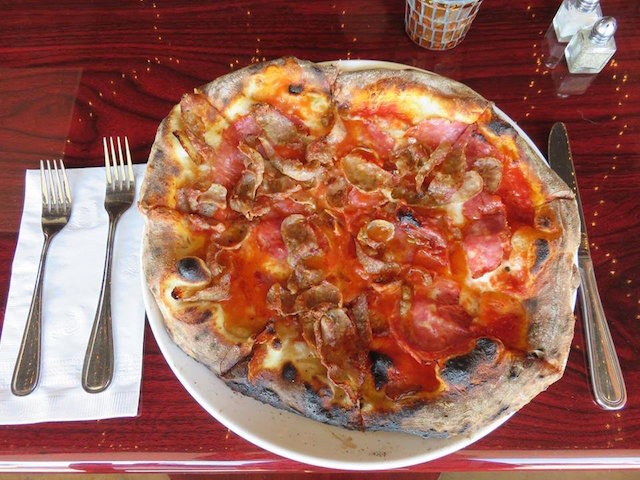 Flame Pizzeria is very clear about a couple of things: they won't make you a gluten-free pizza, and they won't put pineapples on it either. But if you can abide by those two rules, this small Reseda pizzeria from Chef Richard Florczak, who got his start cooking for celebrities like Leonardo DiCaprio and Jennifer Garner, will make you a fine wood-fired, Neapolitan-style pizza. Flame offers lots of build-your-own options, but if you want something interesting, we'd suggest The Nana, which comes with thinly sliced potato, caramelized red onion, sea salt, truffle oil and dill. Carnivores may prefer The Richie, which has soppressatta and fennel sausage and a rich, spicy arrabbiata sauce. —Juliet Bennett Rylah 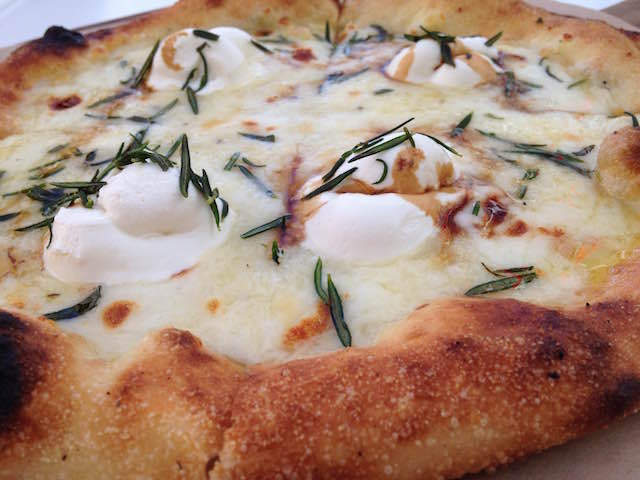 You might not guess that Ray's and Stark is a good place to get a pizza, but it is! Chef Fernando Darin offers five wood-fired pizzas, of which this writer's personal favorite is the bianca: truffle cheese, robiolina, saba, and rosemary. The robiolina is a creamy, whipped cheese that they place, in dollops, on the pie. Another favorite is their Brussels sprouts pizza with anchovy, garlic and capers, though you can get a more traditional margherita or Italian pepperoni, if you prefer. Not to mention, you can dine al fresco and pop by LACMA before or after. —Juliet Bennett Rylah 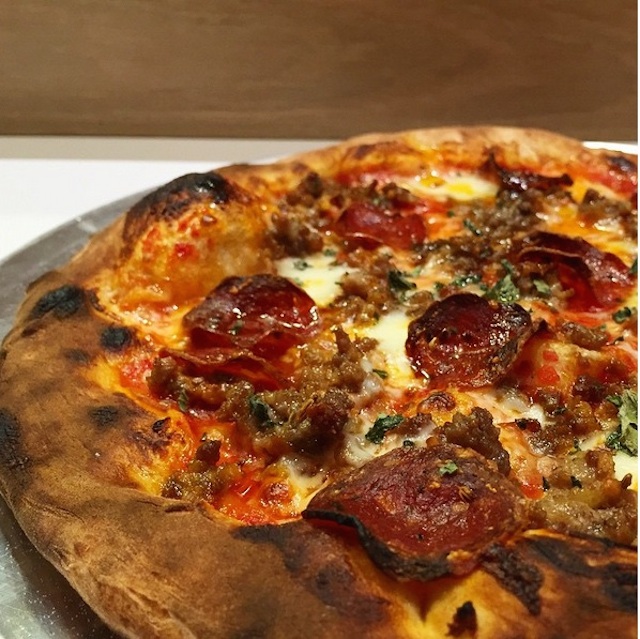 Jon and Vinny's (via Instagram/@johnandvinnydelivery)

Occupying what was once the home of the Damiano's (a neighborhood spot now immortalized in an Earl Sweatshirt song), Jon & Vinny's is, so far, succeeding at claiming their own spot in what's becoming a busy stretch for food—including Jon Shook and Vinny Dotolo's own Animal just down the block. Oh, and the pizza? A perfect hybrid of the traditional Italian and a New York pie, with a crust so thin it's a wonder it still packs a crunch. Don't let the modern decor fool you—none of the pizzas are terribly flashy. There's the upscale spin on margherita (The L.A. Woman, with creamy burrata scoops each individually topped with a basil leaf) or their adult version of a classic pepperoni (The Little Nat's, with caciocavallo in place of mozz). Round it all out with their superb roasted vegetable antipasto and a bottle from their in-house wine shop, Helen's. Reservations are practically required, as their space barely seats more than a few dozen. —Carman Tse

(Photo by Donielle via the Creative Commons on Flickr)

In a city of upstarts, Casa Bianca is an L.A. classic of the highest order. Stepping through the doors of the o.g. Eagle Rock joint—in operation since 1955—is a time warp in the most wonderful way. Think red-checkered tablecloths and a slight kitsch factor, without the overly self-referential cloying of so many "old school" spots. The pizza is Sicilian-style thin crust heaven, and you would be remiss if you didn't sample a pie topped with their signature homemade sausage. 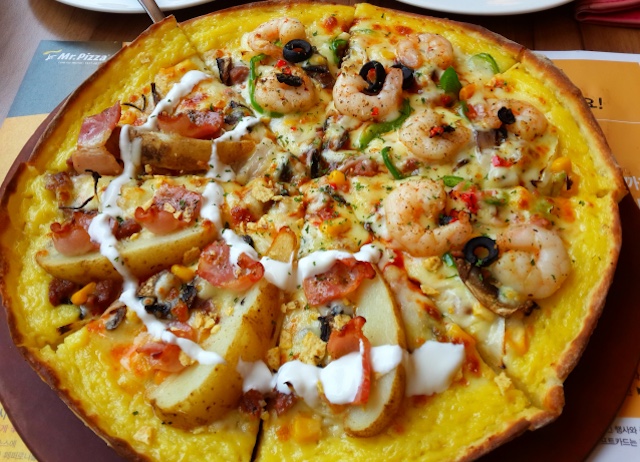 Just one of the wondrous creations from Mr. Pizza (via Facebook)

Not as "gourmet" as some of the trendier places on this list, nor is it anything close to "authentic" (whatever that means), but is there anything more in the spirit of pizza than one of the collage-like pies at Mr. Pizza Factory? Korean fusion before Roy Choi was even a household name, this Seoul-based chain isn't shy about using toppings like cocktail shrimp, nacho chip flakes, potato wedges or mayonnaise drizzle on pizzas with sweet potato-stuffed or their "mocha bun" (stuffed with cream cheese) crusts. It sure isn't conventional—but in this city, what is? —Carman Tse