On Tuesday, the Music Center unveiled the newest place-making effort in downtown's Grand Park: an artistic shade canopy in the shape of eleven giant "paper" airplanes, soaring above the Olive Court area (a.k.a. where the food trucks are) to provide a little sun relief and UV protection. Final plans for the artistic shade canopy were first announced in March—"Paper Airplane," the whimsical vision of artists Elenita Torres and Dean Sherriff, was one of 59 designs submitted as part of a public competition. The construction and installation of the sculpture/shade canopy was funded by a $100,000 grant from the Goldhirsh Foundation's My LA2050 challenge, and it will remain in the park for two years.

"While we reviewed some incredibly creative concepts, 'Paper Airplane' was the overwhelming favorite," Grand Park Director Lucas Rivera said in a statement at the time pf the announcement. "The concept's uniqueness, as well as its ability to capture the dynamic nature of Grand Park and the spirit and personality of the multiple generations who enjoy the park, were both powerful and compelling and make 'Paper Airplane' an exciting choice."

As our friends at Urbanize.LA pointed out, the installation doesn't, uh, look exactly like the rendering (see below), but it's still pretty cool. We Angelenos will take whatever shade we can get. 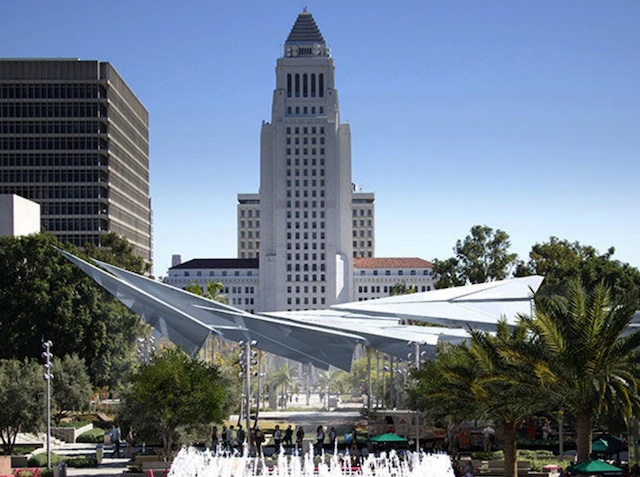 The Paper Airplanes design (Rendering courtesy of the Music Center)

To learn more about how the designs came together, check out this behind-the-scenes look on the L.A. County newsroom site.