Why There Are So Few Left-Turn Signals In Los Angeles 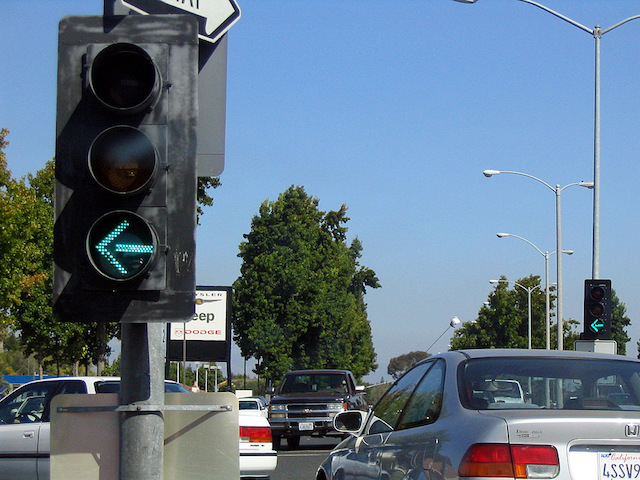 A 'median' left-turn signal, impossible on most of L.A.'s narrow streets. (Wikimedia Commons)

We may be a capital of personal reinvention, but a simple left-hand turn? That's hard to do in Los Angeles. It's a common grievance aired among both transplants and natives alike, that there aren't nearly enough protected turn signals. Inching forward into an intersection to turn left is a foreign concept to lots of people, and the idea follows that if only Los Angeles had more left-hand signal lights, then maybe driving here would be a little bit easier. For a numbers perspective, just about 14 percent (2,100) of Los Angeles' signaled intersection approaches have a left-turn arrow.

Looking for answers, we gave the L.A. Department of Transportation (LADOT) a call.

"When you look at Orange County, or other more contemporarily planned communities around the country, you get have roads that are six or eight lanes wide. There's plenty of space to put one or two extra lanes for left-turns," explained Bruce Gillman, LADOT's communications spokesperson. "When you compare them to Los Angeles, there simply isn't any room."

L.A., in this sense, is a bit of an anomaly. While the city is, historically speaking, rather young, it was also one of the first to plan its streetscape around automobiles. Put simply, left-turn signals (and, for that matter, traffic lights themselves) just didn't exist when the city's streets were first paved. For context, the very first left-turn signal in the region didn't pop up until 1956 on Sepulveda Boulevard, according to L.A. Magazine. By then, most of what we identify as the city of Los Angeles today was already built, and had been for some time.

In 1956, the Los Angeles Department of Traffic began a major effort to "modernize" the city's streets by re-striping lanes to include left-turn "pockets," and adding the over-intersection traffic lights that are standard today. Before then, the concept of even a left-turn lane was pretty revolutionary, as was yielding to oncoming traffic. Until 1957, a driver was legally allowed to turn left at any intersection they had already entered, forcing any oncoming traffic to hit the brakes and wait.

But on the subject of the traffic lights themselves, the only "mastarms" (the poles that suspend traffic lights over intersections) available at the time were not structurally capable of holding more than one light-fixture, meaning than an extra left-arrow was out of the question. Traffic engineers built around this on a few wide streets (like Sepulveda) by planting the left-signal on a median in the middle of the road. Nevertheless, as Gillman mentioned, most of L.A.'s intersections were simply too narrow for a median. On streets that were wide enough, budgetary restrictions kept median building to a minimum, and by 1972, only about 400 (3.4 percent) of the city's signaled intersection approaches had left-turn signals installed, according to LADOT. 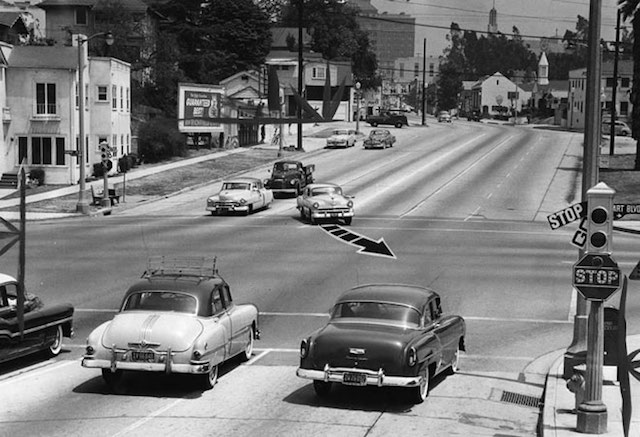 The practice of "darting", turning left on a fresh-green in front of on-coming traffic, was once regularly employed by impatient (or expedient) drivers. (Photograph courtesy of the Herald-Examiner Collection, Los Angeles Public Library)

By the 1970s, mastarms capable of holding two or more traffic signals were becoming commonplace (thus eliminating the need for a median), and were regularly included in the portions of the region developed from then on. This includes much of the San Fernando Valley and Inland Empire, along with cities in Orange, Ventura and Riverside counties.

Though more left-turn signals could have been added at this time in Los Angeles, the city chose not to, fearing the adverse effects the extra signal cycles could have on traffic flow. Adding left-turn signals to L.A.'s grid would have required significantly longer light cycles. Where L.A.'s traffic signals today are computer-controlled, and "know" how many cars there are at an intersection, signals in the '70s were timer controlled. Making left-turn signals ubiquitous would require motorists to spend even more time at increasingly clogged intersections, potentially waiting for a left-turn light to complete its cycle for cars that might not even be there. A philosophical decision was made by city planners to maintain the status quo, and prioritize through-traffic over traffic-making left-hand turns.

Planners maintained this philosophy until 1991, when the Los Angeles City Council forced the installation of a left-turn signal at the intersection of Temple and Main. Turns out, a judge working in a downtown courthouse had grown frustrated waiting to turn left without a signal, and convinced a friend on the City Council to pass a motion.

By the 1990s, LADOT was busily building out its "Automated Traffic Surveillance and Control" system (ATSAC), and the new signal was a so-called "smart" signal. ATSAC uses sensors (called "induction loops") to detect how many vehicles are present at an intersection. The signal built at Temple and Main incorporated this into its design, and was programed only to turn green if more than four vehicles were waiting to turn left. If there were less than four, then the "yield" to oncoming traffic rule still applied—think of those signals with five lights on them, a single red light at the top. Since then, the so-called "smart-lefts" have been incorporated into several hundred intersections around L.A.

Gillman emphasized that LADOT has nothing against adding a left-hand-turn signal. Adding left-turn signals are some of the department's most common requests.

"If we get a lot of requests on a particular intersection, we send our engineers out to do a survey." He continued, saying how LADOT engineers check an intersection twice a day, during peak morning and evening rush hour, to see if there is an issue. "For example, if cars in the line to turn left start blocking flowing traffic, that might be grounds for a signal."

It's also expensive. According to Gillman, traffic signals cost roughly $100,000 installation and are a "very involved" process.

So, that's why there aren't that many left-turn signals in L.A.

Full disclosure: As someone who was born and who learned to drive in Los Angeles, I think the number of protected left signals in my town is just right. Sure, there are a couple of intersections that could stand to gain a little green arrow—looking at you Washington and Figueroa—on the whole, I have no complaints.