Is Amoeba Going To Get The Wrecking Ball For A Big Fancy Tower? [UPDATE]

On left, rendering of possible tower at 6400 Sunset Boulevard; Amoeba Music on right (Courtesy of GPI Companies and Shimahara Illustrations)

Are you sitting down? We are sorry to ruin your afternoon, but we have some potentially terrifying news. Hollywood's beloved Amoeba Music may not be long for this world, at least in its current incarnation.

The iconic record store "instantly became a Hollywood landmark" when it opened on Sunset Boulevard in 2001, spanning an entire city block between Ivar and Cahuenga. Now, it looks like GPI Companies, a real estate group, could be planning to raze the famous building, "pave" vinyl paradise, and put up a 20-something story tower monstrosity, complete with a massive rooftop pool: 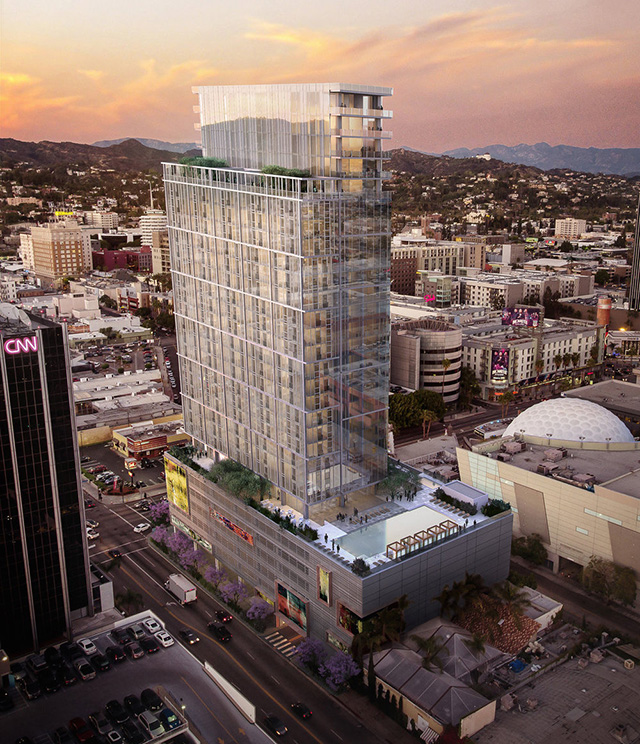 The rendering, which depicts a mixed-use, sky-scraping glass tower dwarfing the neighboring CNN and ArcLight buildings, comes from the online portfolio of Shimahara, an architectural illustration firm. We spoke with a project manager at Shimahara, who said they didn't know what the actual plans for the site or the rendering were, but that they were definitely for 6400 Sunset Blvd. (Amoeba's address), and that Shimahara had completed them in April. We were also told that the renderings had been commissioned by architectural firm Johnson Fain, although a call to Johnson Fain was received with a very terse we-don't-know-what-you're-talking-about response.

According to property records, a limited liability company (LLC) by the name of 6400 Sunset purchased the 44,616 square-foot building for $34 million on October 28, 2015. In the month and a half before the sale, three different 6400 Sunset-related LLCs were registered ("6400 Sunset Blvd, LLC," "6400 Sunset, LLC" and "GPI II 6400 Sunset Member, LLC"); all of them are registered to same Brentwood address that also houses GPI (the same people who brought you mega-malls like The Promenade at Howard Hughes Center, Granada Hills Town Center, and The River at Rancho Mirage).

Hollywood is already a hotbed of development with a number of major plans in the works, including a 21-story hotel slated to replace the Jack in the Box across the street from Amoeba. 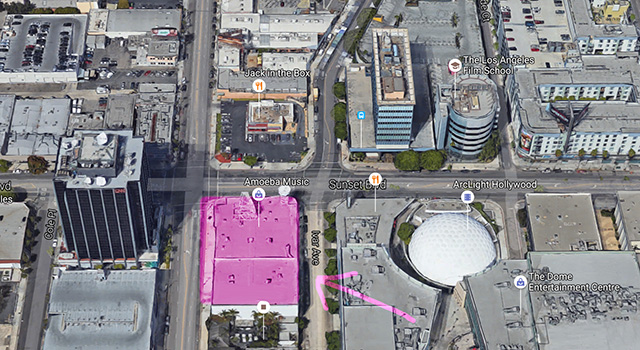 After several calls to GPI, Katie Bazjatt, an office manager, told LAist in an email that "at this time, we have not yet made an application with the City and are not certain whether we will. We have no other information at this time." We should also note that any plans to raze Amoeba (whether or not the record store would still have a place in the new building) will likely be met with public outcry, which could certainly slow down (if not entirely stall) any redevelopment process.

After we called Amoeba Hollywood to see if they knew anything about the plans, Rick Sanchez, a manager at the record store, put us on hold while he spoke with Jim Henderson, one of the store's co-owners. Sanchez told us that neither he nor Henderson had any information on the plans.

In other interesting news, the 6400 Sunset, LLC made a $700 donation to City Councilman Mitch O'Farrell's reelection campaign in December 2015, according to L.A. City Ethics disclosure forms. Councilman O'Farrell represents District 13, which encompasses much of Hollywood, including the stretch of Sunset between Ivar and Cahuenga. We reached out to the councilman's office to see if anyone from GPI had been in contact with the councilman, and here's what we heard back from Tony Arranaga, Councilman O'Farrell's Communications Director:

The developer has come to our office with ideas, but nothing has been filed with the city.

The Councilmember has expressed to the new owner the importance of world-class design for any possible redevelopment on this site.

In addition to selling records, the current building which holds Amoeba Records is an entertainment hub and popular cultural destination.

The Councilmember is disheartened about the sale, and would love for Amoeba to stay. Should Amoeba move from its current location, the Councilmember is committed to working with the store to identify another location that would allow them to remain in Hollywood.

Sidenote: While it might be easy for some to see a story like this as a reason to support That Terrible NIMBY Ballot Measure™, let's be really clear about one thing: not all development is bad, just like not all development is good. As we've argued many times, L.A. needs more housing, particularly more affordable housing, and more density, particularly along transit lines, in order for our city to remain a livable place, and for our investment in transit infrastructure to remain viable. One can oppose the specter of certain developments without thinking that virtually all major development in the city should be halted for two years, which is what That Terrible NIMBY Ballot Measure™ (i.e. the Neighborhood Integrity Initiative) would do. To paraphrase Walt Whitman, the city is large, it contains multitudes. And one doesn't have to be a booster for all development in the city to still think that it would be dangerous and potentially disastrous to freeze all growth.

Update [7:30 p.m.]:
Amoeba Music issued an official statement via Twitter just after 6:30 p.m. Monday night, writing that the iconic store will remain in their building on Sunset for the duration of their lease, which is several years, and that both Amoeba and the building's owner are open to them potentially staying longer.

You may have read an article today about us... pic.twitter.com/18l9zRPGMn

This story was updated immediately after publication to include a statement from Councilman O'Farrell's office.