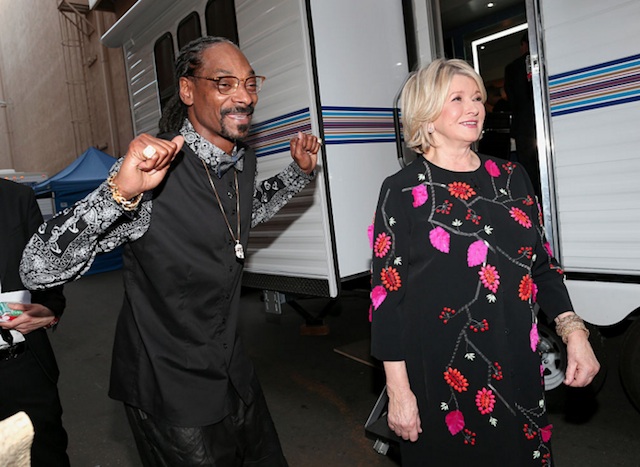 We are very excited about the forthcoming television show featuring our favorite celebrity BFFs Martha Stewart and Snoop Dogg, which is set to "redesign the traditional food competition shows in a new, different and very funny way." Martha & Snoop's Dinner Party certainly has the potential to be my new favorite show, especially if Martha winds up getting high AF on camera.

TMZ caught up with Stewart outside of LAX, where she revealed that they were filming the show in LA this week, and referred to it as "Martha and Snoop's Potluck Dinner"— a far better title, though we haven't been able to find anything confirming this change.

The interviewer asked who the better cook was, and Stewart replied, "I have no idea, I've never cooked with him (which is a lie), but I will know in about four hours."

And then came this wonderful nug of an exchange:


TMZ: Are you guys going to do any marijuana-infused items?

Martha: Oh he is, for sure!

TMZ: Would you try them for scientific purposes?

We all know Martha is a wiz in the kitchen. It follows that we're are very interested to see what kinds of delectable treats she and Snoop might be able to infuse with THC (how about those mashed potatoes?), and even more interested in seeing Martha trip balls.

As for Snoop, he had this to say to Esquire earlier this week about the forthcoming show:

Good food, good weed. You know what I'm saying? It's all a party and about uniting and bringing people together. Everything I'm doing right now is a peace offering and gesture to the world to show that you can always put more love in the world than hate. That's what I'm on right now.