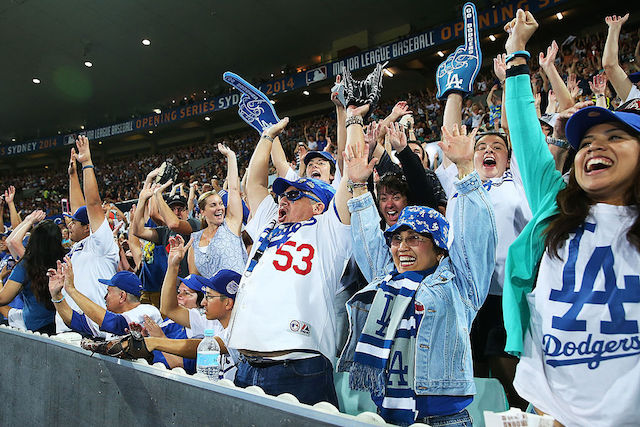 Fans do The Wave at a Dodger game in Australia in 2014. The Wave knows no boundaries. (Photo by Brendon Thorne/Getty Images)

You ever go to the ol' ballgame and sit there having a nice conversation about your divorce when all of a sudden...

The Wave. It hits you like an invisible force that compels you to stand up and throw your arms in the air. I'm here to save you, dear reader.

The exact origins of The Wave (known as "The Mexican Wave" outside of North America) are disputed, but most sources say that Patient Zero is Krazy George Henderson, who led the first Wave recorded on video at an Oakland A's game in 1981. Since that fateful day, the scourge has spread across all sports and stadia, like an incurable disease.

Oh but baseball is such a boring sport, let the fans have fun! Why are you even at the game in the first place? Baseball is a game of patience and persistence—The Wave implies a disinterest in the game, and sends a message to the players that the fans aren't even there to care about the game. "I get it if it's like a blowout situation or a slow game—fine, mix it in," then-Washington Nationals pitcher Drew Storen told The Washington Post in 2012, when Nats fans started a "Kill The Wave" movement. "But we’ve had a couple of times where it’s been the bottom of the eighth and it’s a close game. Cheer for the game, you know?"

Just last week, Mets pitcher Noah "Thor" Syndergaard chimed in with his own take on The Wave (he hates it) and even made a fans code-of-conduct video for Citi Field: "Just don't do it. The Wave isn't cool anymore."

Very happy we won....but I want the name and address of the person who started the "Wave" tonight. #banthewave #resisttheurge

Major League Baseball has made several efforts in recent years in trying to appeal to a new generation of fans—from embracing its statistical revolution to speeding up the pace of the game—and discouraging The Wave would send the message that the game on the field is the most important aspect of going to the park.

Not only that, The Wave could also be a distraction for the players on the field. When a pitcher is throwing a small spherical object at 95 miles per hour to a precise target 60 feet and six inches from the mound, concentration is tantamount. I was at Dodger Stadium on April 28, 2012 when reigning-National League MVP and The Second Coming of Babe Ruth, Bryce Harper, made his debut and got his first career hit. You won't guess what the fans at Dodger Stadium were doing:

(You can see it behind Harper as he swings in the clip above. It's zoomed-in so tight because some guys sitting behind the plate were not only doing The Wave, but also possibly mooning their own pitcher.)

Dodger Stadium is especially teeming with Wave-starters. Go to any game at Chavez Ravine and you will witness at least two Waves or attempts at The Wave. Just another thing to add to the checklist of sins that come with with being a Dodger fan, like arriving during the third inning and leaving during the seventh inning, thinking Sandy Koufax was better than Bob Gibson or Juan Marichal, and those stupid beach balls. Don't get me started on the beach balls.