Vin Scully's Last Regular-Season Games To Be Broadcast On KTLA 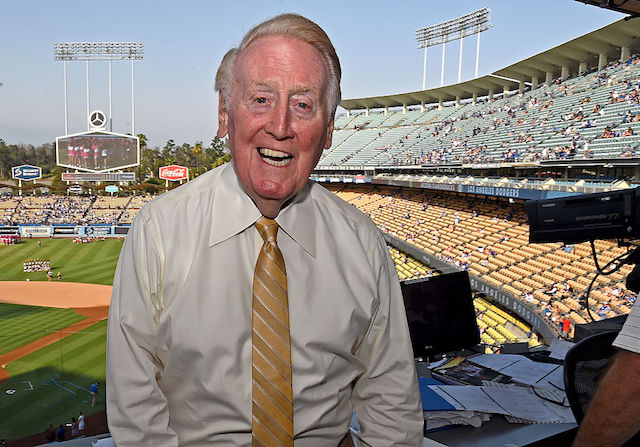 Vin Scully's leaving the announcer's booth after 67 (!) years. To give you some context, when Scully first started, Harry Truman was president, Peanuts was in its first year of circulation, and the Dodgers were still in Brooklyn.

Of course, one thing fans have been grumbling about in recent years is the fact that you can't even watch the Dodgers telecasts (unless you have SportsNet LA, or if the game is televised nationally). But it looks like the baseball gods have rectified things just in time. That's right: Vin Scully's last six regular-season games will be shown on KTLA, reports the L.A. Times. What's also notable is that Scully, who had mostly retired from doing road games, will be at AT&T Park as the Dodgers take on the Giants.

The six games that will be televised on KTLA are: September 23-25 against the Colorado Rockies at Dodger Stadium, and September 30-October 2 against the San Francisco Giants at AT&T Park.

As noted by the Times, the agreement means that a possible deal between AT&T/DirecTV and Charter to carry SportsNet LA is put on hold for now. Charter had just bought up Time Warner Cable, who owned SportsNet LA, so they're trying to figure out what should be done with the Dodgers-exclusive channel.

We're very happy that majority of L.A. will now get to hear Vin for a final time. To celebrate, here are some choice anecdotes in which Vin talks about snakes and beards: