This Map Shows How And Why Gentrification Is Happening Along L.A.'s Transit Lines

Researchers at UCLA have created an interactive mapping tool that shows where gentrification—and displacement—are occurring across the city, particularly in relation to transit lines. As part of a joint project with UC Berkeley, the Urban Displacement Project analyzed data relating to a number socioeconomic, demographic and housing characteristics to map neighborhood change in Los Angeles and San Francisco.

Here in Los Angeles, researchers found that areas near transit stations tended to be changing, with many of them trending toward gentrification, and "neighborhood upscaling." That upscaling can have a devastating effect on existing communities, leading to the displacement of longstanding residents.

"Sometimes, landlords aggressively—and perhaps illegally— force [low-income residents] out," Paul Ong, director of UCLA Luskin's Center for Neighborhood Knowledge and one of the map's creators, said in a statement. "Higher rents make it difficult for low-income households to move into the neighborhood, so we see a net decline in their numbers. They are replaced by those who can afford the higher housing cost—people referred to as 'gentrifiers.'"

As Los Angeles invests more heavily in its rail and light-rail system, the neighborhoods around transit stations grow increasingly desirable to outside investment, and their residents become increasingly vulnerable to displacement. In examining how neighborhoods have changed from 2000 to 2013, Ong and his team found that areas near light-rail or subway projects were more likely to be associated with increases in white, college-educated, higher-income households and greater increases in the cost of rents, versus neighborhoods not near transit lines. On the flip side, those transit-oriented neighborhoods were also more likely to have seen greater losses in disadvantaged populations, including individuals with less than a high school diploma and lower-income households. The research shows that the level of impact differs from location to location, but "the biggest impacts seem to be around the downtown areas where transit-oriented developments interact with other interventions aiming to physically revitalize those neighborhoods."

Ong said that these neighborhood changes are also beginning to happen in Boyle Heights and parts of South Los Angeles. "Preferences—in terms of where one wants to live, and what type of lifestyle people want to lead—are changing," he explained over the phone. "And when those things are changing, there's going to be change in the urban landscape, with neighborhoods becoming more attractive to people's interests and therefore to investors."

The inset from the map below shows neighborhood gentrification, juxtaposed with several rail and light-rail lines. Areas in blue gentrified between 2000 and 2013, areas in green gentrified between 1990 and 200, and areas in red gentrified during both decades. (Screenshot via Urban Displacement Project; See the full interactive map here)

The dark irony of displacement along transit lines is that lower-income households constitute our transit system's core ridership, and they are also far more likely to be car-free than higher-income households. So what happens when those very lower-income residents are displaced, and often forced to relocate to the outer edges of the city? Although proximity to transit has been linked to higher ridership rates and less vehicle miles traveled across the board, the young professionals moving in are far less likely to use transit by necessity, or to be daily riders (according to one report, carless households use transit for 19.1 percent of trips, "while the addition of even a single vehicle to a household drops transit use to 2.7 percent of all trips"). Ultimately, protecting affordable housing along rail and light-rail lines is more than just an equity issue—it's vital to the continuing success of our transit system, and to environmental concerns in our auto-centric city.

This infographic from Maintaining Diversity In America’s Transit-Rich Neighborhoods, a 2010 report from the Dukakis Center for Urban and Regional Policy, offers a good visual overview of the process. 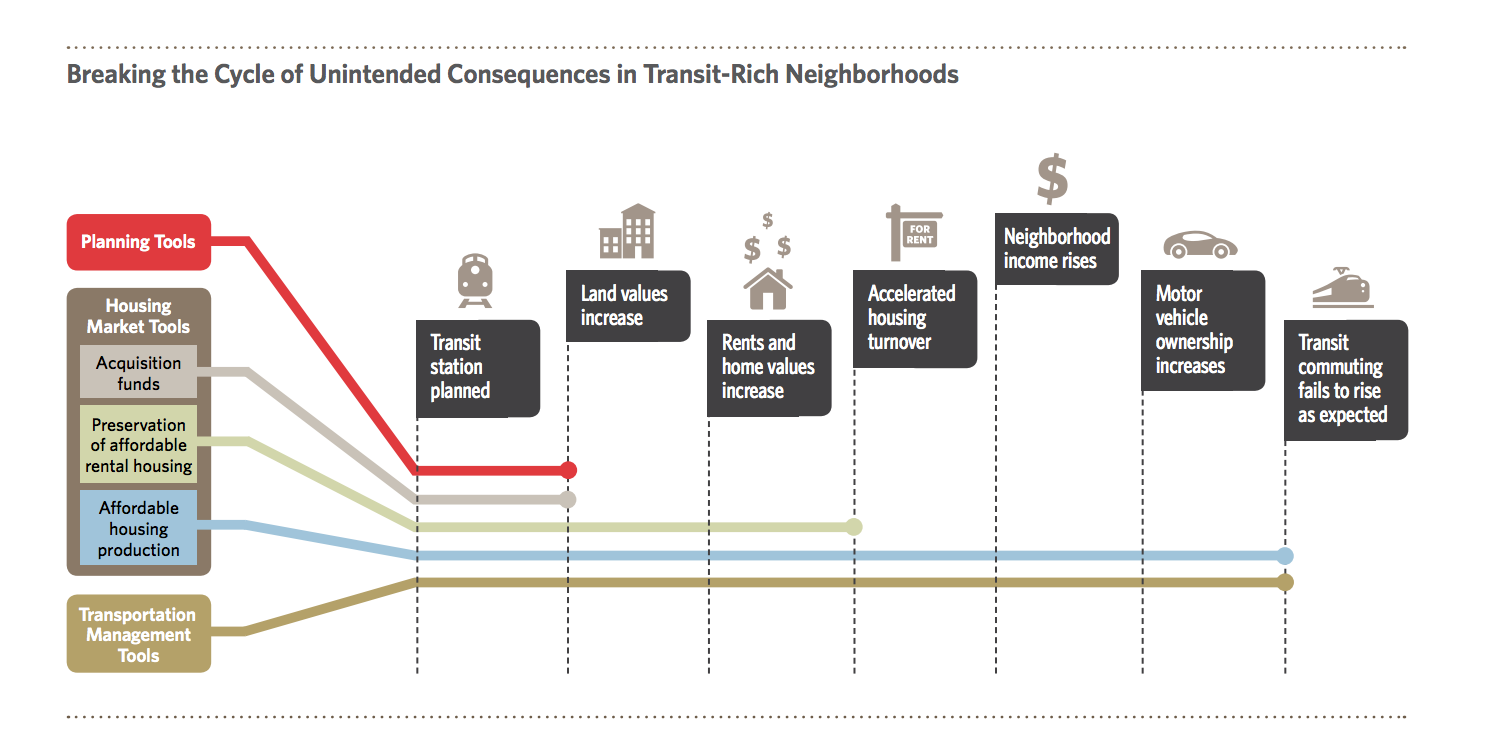 "Our interest," Ong explained, "is in trying to identify what some of the drivers are that are creating inequality in our society and then also try to think about solutions. Clearly, some of the inequality is in terms of how the city is developing, and who has access to some of the new developments that are very beneficial, and who may be harmed by some of those changes." According to Ong, the group's larger research agenda has been centered around issues of social justice, with previous reports on income inequality, the increasing rent burden in Los Angeles compared to other metropolitan areas, and issues related to race and ethnicity.

So what can be done to prevent displacement along L.A.'s growing transit system? According to Ong, there are several approaches. In a conversation with LAist, he underscored the role public policy could play in preserving affordable housing, particularly in enforcing existing laws around the Ellis Act, a state law that allows landlords to evict tenants in order to "go out of business" (i.e. if they are selling the property, or converting it from rental units to sell as condos), but is often violated by landlords who then illegally return the units to the rental market at higher prices after evicting their longtime tenants.

"Part of it is also increasing the supply of housing overall, but certainly affordable housing," Ong said, explaining that that could be done in partnership with non-profit organizations, as well as with local governments playing an active role. "It will require resources, but also changes in regulation," he said.

"Looking at why the cost of housing in Los Angeles is so high in relation to income—we have to change our regulatory approach to things. We also need a stronger nonprofit sector that can provide and supply units. There's no single answer. But when we as a public make major investments, such as in transit, I think we have an obligation not just to put the money in, but also to guide development so everyone can benefit from it."