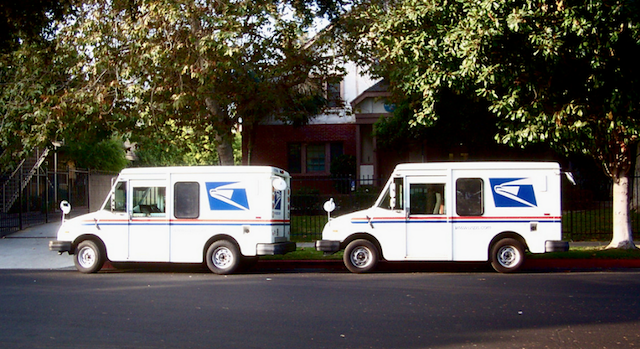 (Photo by jojomelons via the LAist Featured Photos pool on Flickr)

Numerous USPS workers in California, including several in Southern California, have been accused of stealing mail—including packages containing medications and cell phones—or simply not delivering it.

According to a release from the United States Department of Justice, 28 USPS employees and five others have been charged with various crimes including mail theft, embezzlement, bank fraud, false statements and conspiracy. Arrests warrants were issued for six of the 33 people, while others were charged in indictments returned by the federal government last week.

"The mail system plays an important role in our country's commerce and social communication," U.S. Attorney Eileen M. Decker said in a statement. "Mail theft across Southern California has increased recently, which is significant since this type of crime tends to be a precursor to other crimes like identity theft and drug offenses. As a result, we are stepping up enforcement activities, including dealing aggressively with corruption within the Postal Service."

Jarol Garcia, 33, is accused of stealing several mobile phones while working as a mail handler at the Moreno Valley Distribution Center, and then attempting to exchange them online. According to an indictment, Garcia, who was once the president of the Mail Handlers Union, allegedly had at least 166 stolen phones in December of 2015.

Norman A. Muschamp, 48, who worked for the Mid-City District of Los Angeles, is accused of taking part in a scheme where information from victims of ID theft was used to order pre-paid PayPal debit cards and have them sent to fake addresses along his route. He is accused of receiving the debit cards from the mail, then giving them to the others involved in the alleged conspiracy in exchange for cash.

Sherry Naomi Watanabe, 48, is accused of hoarding mail as opposed to delivering it to customers along her Placentia route. According to a plea agreement, she was found to have over 48,000 pieces of mail that she was supposed to deliver stored in her home.

Tamika Deloach, 38, of Wilmington was charged with allegedly stealing checks and depositing them into her own credit union account. Nicole Elwood, 45, of Atascadero is accused of stealing mail that contained medications, some of it intended for veterans.

But before you go thinking that that piece of mail you were expecting but never received was likely stolen by your mail carrier, know that U.S. Postal Service Office of Inspector General Special Agent in Charge Brian Washington states that "the overwhelming majority of Postal Service employees are honest and dedicated public servants who are worthy of our trust. However, when employees engage in criminal activity, our agency will aggressively investigate these matters to protect the overall integrity of the Postal Service."

The complete list of charges can be read here.